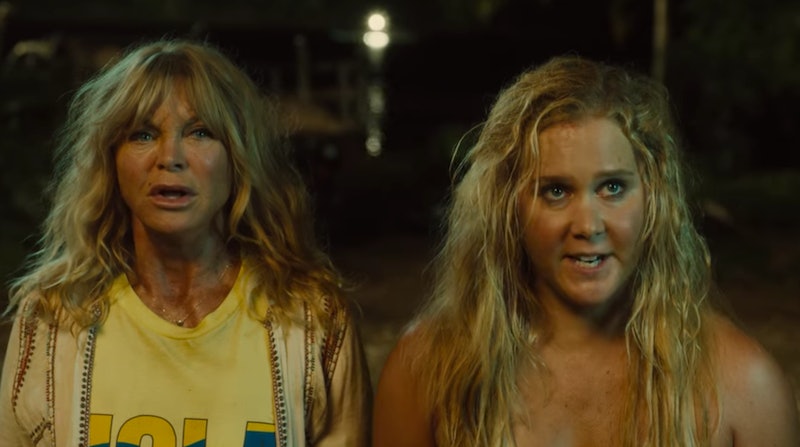 I've lived on my own for about seven years, since I moved to New York as a fresh-faced 19-year-old college grad who, I deign to admit, hoped the city would be like something out of a Cecily Von Ziegesar novel series. (OK, fine, I'm talking about Gossip Girl. I hoped it would be like Gossip Girl.) Ever the independent gal, I would scoff when my mother would remind me of simple things like remembering to do my laundry or buy household supplies. When it continued to happen as the years passed, the scoffing turned into fights occasionally resulting in my hanging up the phone in a fit of rage, overcome with irritation that she just couldn't see I was grown now. I didn't need her anymore, I would think; I was an adult, who could deal without my mom's guidance. But seeing Snatched, Amy Schumer and Goldie Hawn's new mother-daughter comedy, made me realize just how unmistakably wrong I was.

So much of Snatched echoed my own bond with my mother, in a way that truly spoke to me. Spoilers ahead! Take Linda doting over Emily, for example; she slathers sunscreen all over her daughter while she is sunbathing to prevent sunburn, much to Emily's disdain; she chastises Emily for her choice in shoes, prompting Schumer's character to exclaim "I'm an adult woman"; she laments how Emily could be so gullible as to believe that one of their kidnappers, an attractive Australian man who flirted with Emily in an effort to lead her and her mother right into their captors' grips, was actually innocent.

However, though Linda seems to drive Emily, who's selfish and spoiled, positively insane, Emily still begs Linda to do classic, if absurd for the movie, "mom" things when the going gets tough: Kill a scorpion in their cell, for instance, and get a tapeworm out of her stomach. Of course, most of these scenarios are extreme, and likely not (I mean, I hope not) things I'll ever have to confront with my mother, but the way Emily and Linda interact under their exaggerated circumstances is too real to ignore.

I can't count how many times I've gotten annoyed or angry with my mother for attempting to remind me to do something in my life, only to feel secretly thankful she did when I actually forget that thing. Or how many times I've proclaimed I'm "independent" and can do things for myself, only to beg my mom to help me out when I'm sick or down. But I get it now: Being grown up doesn't mean you stop needing your mom; it means you learn to appreciate everything she's done for you — and not only that, but you learn to return the goddamn favor.

Emily realizes this as her mother pushes her to safety, wanting to ensure her daughter is safe despite the fact she herself could die as a result of it. After Emily makes it to an American embassy in Bogota, Colombia, an official tells her she'll be airlifted back to the states, but she refuses to leave — not without her mother, because Linda never gave up on her, so she wasn't about to give up on Linda. Emily puts herself in harm's way to save Linda, and thankfully succeeds; upon embracing her mother, she admits she's been selfish, and that she does, in fact, need her mother.

I have no problem stating that I began to feel emotional in the theater as Emily reached this realization — Snatched does an excellent job of showing both sides of the mother-daughter relationship it portrays. Though I, obviously, identified with Emily more than I did Linda, the film encouraged me to sympathize with her, too, and realize that she does all that she does for Emily not because she wants to be annoying, but because she's a mother. Emily may not need Linda to do things like slather sunscreen all over her or make her lunches, but Linda does it because she loves and wants the best for her daughter. I'm sure there are billions of things Linda would rather be doing than doting over Emily, just as there are things my mom would likely rather be doing than hearing me get annoyed when she dotes over me — after all, they're both also badass, smart, funny woman — but they're mothers, and they're going to do it anyway. I get that, now.

So, that said, I'd like to take this opportunity to genuinely apologize to my mother for taking her for granted all these years: I appreciate all that you have done for and still do for me, and I know why you do it. Thank you. I just hope that some day I can do the same for you.