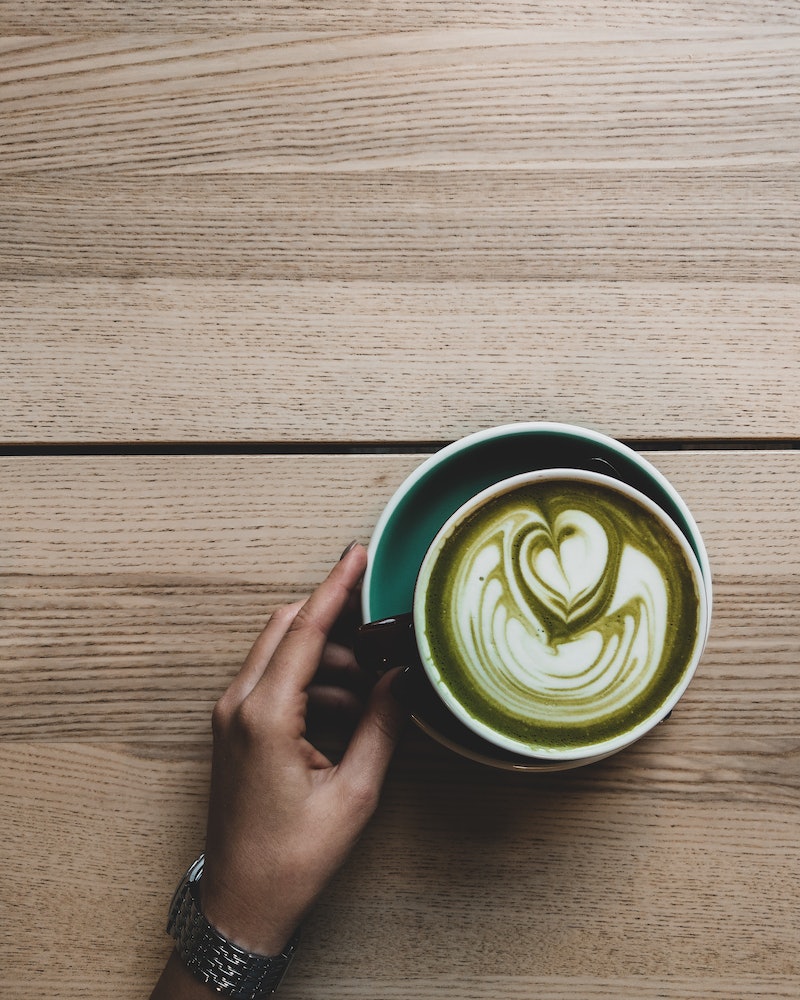 Coffee has become such a ubiquitous part of everyday life that you might not know how much you're consuming — until your jitters kick in, that is. Even if you are aware that you're overdoing it, it's still a challenge to control or curb coffee consumption. If you want to decrease your caffeine intake but keep the habit of drinking something warm and going with friends to coffee shops, you'll want to know how your body reacts to matcha vs. coffee.

To be clear, matcha tea does have caffeine, too. But while it's a type of caffeinated green tea, it doesn't have nearly as much caffeine as coffee does. According to matcha brand Got Matcha, a cup of matcha tea contains approximately half the caffeine of the same amount of black coffee. Of course, this can vary, depending on the strength of the matcha and the strength of the coffee.

It's worth noting that there's nothing technically wrong with having some caffeine in your diet. The caffeine found in coffee and matcha is a natural stimulant for your central nervous system, which is why so many people love it. There are some health benefits to caffeine, too: one 2019 study in South Korea suggested a correlation between drinking coffee and living longer, and another 2015 study published in Current Neuropharmacology suggested that caffeine consumption could influence or increase cognitive performance, and help you to retain memories more easily.

However, too much caffeine consumption in a given period of time can lead to negative side effects (as many people have experienced at some point in their lives). That same 2015 study mentioned above pointed out that too much caffeine (which is a relative term; people have varying caffeine tolerances) can lead to emotions like severe anxiety, and can be addictive. What's more, a 2019 study published in The American Journal of Clinical Nutrition suggested that heavy coffee consumption (six cups a day) can increase blood pressure, which can then increase the likelihood of heart disease by up to 22%.

For this reason, it's a great idea to stay on top of your caffeine consumption. But even after you make the switch from coffee to matcha, it's difficult to predict how exactly your body will react. It totally depends on how much coffee you drink, how your body reacts to caffeine to begin with, and more. A quick Google search of the comparison between the two drinks will show countless bloggers sharing their experiences, and if you were to read these posts, you'd see that no two experiences were fully alike. Still, most people who write about the experience seem to share the same fear: going through caffeine withdrawal.

If you are worried about experiencing the symptoms of caffeine withdrawal, you should keep in mind that you're not cutting out caffeine cold turkey if you switch to matcha. "Both drinks contain caffeine, [and] will help perk you up initially," Dr. Laura Thomas, PhD, RNutr, a registered nutritionist who specializes in intuitive eating, explains. As for whether one drink is healthier than the other, she maintains that the difference is "negligible."

"No single individual food or drink makes us healthy or unhealthy," she says. "Both can be a good source of calcium if using either cow's milk or a fortified plant based milk. Pick the one you like the taste of best and is most affordable."

But it's not just the caffeine levels themselves that could impact your experience switching from coffee to matcha. According to cognitive neuroscientist and author Dr. Caroline Leaf, PhD, your mental approach to the switch could also affect it.

"Fearing something makes the symptoms you may experience in your body worse," Dr. Leaf explains. "Any change brings challenges, but fear and worry exacerbate the situation by changing the environment around the cells (through a process called epigenetics) of the body, which will negatively impact how the cells are dealing with the changes."

Though epigenetics is a relatively new field of academic focus, studies have shown that traumatic experiences and negative emotions, like fear, can imprint upon genetics so deeply that they can even be passed from one generation to the next. One Emory University study in 2013 proved mice could pass on information about traumatic experiences on to their offspring. Specifically, mice were given a mild shock every time they were exposed to a specific smell, and their offspring were found to fear that smell, even though they'd never been shocked themselves.

Of course, no one is going to shock you when you switch to matcha. But there is value in knowing that strong emotions of anxiety or fear around an experience could possibly impact you.

It's also worth remembering that caffeine withdrawal is a temporary experience, with relatively consistent symptoms you can watch out for. "The most common sign of withdrawal is a huge headache, but you may also experience fatigue, anxiety, and irritability," Keri Gans M.S., R.D.N., C.D.N., a registered nutritionist consultant, says. "The good news is that these symptoms are not permanent and within two to nine days can disappear. To avoid side effects, a person might consider gradually switching from regular coffee to matcha tea instead of doing a complete switch at once."

If your goal is to slowly eliminate caffeine from your diet entirely, then you could consider a transition from coffee, to matcha, to green tea, to herbal decaffeinated tea. And voila — you've slowly eliminated caffeine from your beverage diet, and you still get to hold a warm cup of liquid every day. If you're interested in reaching net-zero on your caffeine intake, you can see what experts also say about switching from coffee to green tea for inspiration.