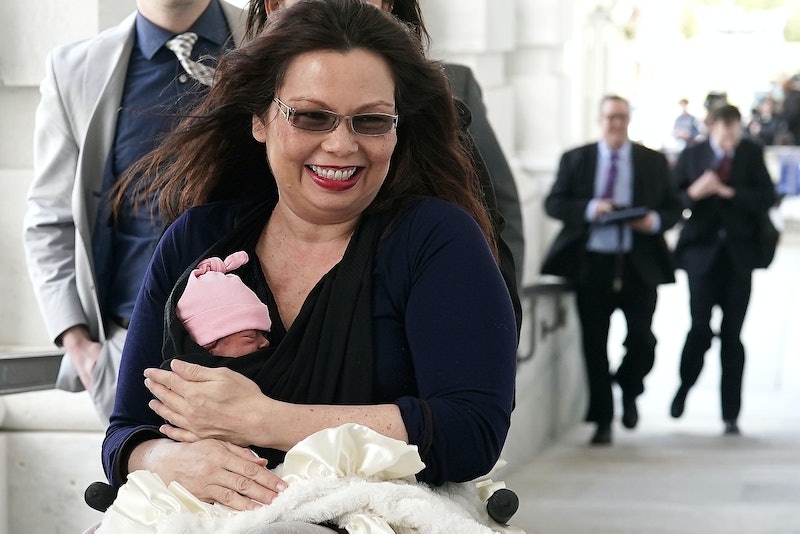 Sen. Tammy Duckworth’s 10-day-old daughter was bundled up on her chest, protected from the cold mid-April wind. The Democrat from Illinois was just stopping by work, but she was bombarded by more reporters waiting for her outside the Capitol than usual. The minute the mother-daughter duo rolled onto the Senate floor, Duckworth felt the normal chaos of the place jolt to a halt — every eye was on her. She may have only been at the Capitol for about 30 minutes that day, but it was an iconic moment in congressional history as Duckworth set another historic first: The first Thai American woman elected to Congress also became the first senator to take their baby on the floor.

“It was just like a mob scene where everybody wanted to touch the baby,” Duckworth tells Bustle. “A room full of 100 politicians, of course they all wanted to hug and kiss the baby.”

No U.S. senator had ever given birth while in office before Duckworth, which meant Senate rules weren’t designed for her. Members of the House were already allowed to take their children onto the floor, but Duckworth found out when she joined the Senate that the same rules didn’t apply. Not only was it forbidden to bring children onto the floor, but if a senator took maternity leave, they couldn’t introduce new legislation or vote for the duration, either.

Because the Senate was split down party lines 51-49 when Duckworth was pregnant with her daughter, Maile, she knew taking three months off wasn’t an option. There was also the issue of how she would cast votes with a newborn, because it’s against conflict of interest rules for a senator to leave their child with a staff member.

“If she wasn’t allowed to come on the floor, what do I do — leave her in her little basket outside the door? That doesn’t even make sense,” Duckworth tells Bustle. “And that’s when we decided to pursue the rule change.”

Fighting For A Rules Change

Duckworth announced her pregnancy in January 2018 and went to the Senate Rules Committee to suggest the change not long afterward.

“She thought, and I agreed, that in the year 2018 maybe we could allow a new mom — or dad — to bring their baby to the floor for votes,” Sen. Amy Klobuchar (D-Minn.), the ranking member of the committee, said in a March speech at the Gridiron Dinner, according to a transcript provided by her office. “Well, we soon found out that they haven’t allowed anyone new on the floor since 1997 and that was for a dog.”

Duckworth explains that she was initially told that she could bring her daughter onto the Senate floor until she was 3 months old. But the senator was planning to spend less time at work during those initial weeks, and she expected to breastfeed for longer than three months.

“The fight was inertia in the system,” Duckworth says. “The men had been having babies for hundreds of years, right? But no senator had actually given birth to a baby, and no senator had had a baby that literally depended on that senator for their nourishment, because I breastfed.”

The opposition came up with “silly reasons” why babies shouldn’t be allowed on the floor, according to Duckworth, who adds that a lot of the pushback was “generational” — basically, from older men. Their main concerns? The baby’s dress code and Duckworth breastfeeding on the floor.

“I’m like, seriously? This is the conversation we’re having right now about this rule change, you want to know what the baby’s dress code is?” Duckworth says. “She’s a baby. She wears a beanie, which I’m not going to take off her head. She’s probably going to be in a onesie, so she won’t be wearing shoes. But if it’s important to you, I’ll throw a blazer on her.”

Like the dress code debate, Duckworth found the breastfeeding concerns baffling. According to Klobuchar and Duckworth, a group of male senators sent a female senator over to ask each of them if Duckworth intended to nurse her baby on the floor.

“I just looked at them like, ‘Listen, it’s no thrill of mine to whip one out in front of all these guys, so know that I’m only going to do it if the baby’s hungry,'" Duckworth says. "But if she’s hungry and needs to be fed, I’m going to feed her. But I’m not doing this so I can breastfeed on the floor. Trust me. I’m doing it because I need to vote."

Although Duckworth had Klobuchar and Sen. Roy Blunt (R-Mont.), who took over as chair of the Rules Committee the month Duckworth gave birth, in her corner, it took months for an agreement to be reached. Still, the timing couldn’t have played out better.

The morning after the Senate unanimously voted to allow Duckworth’s baby on the floor until she turned 1 year old, the senator was at home when she found out that she might need to head into work to cast a potentially tie-breaking vote against President Donald Trump’s nominee for NASA administrator, James Bridenstine. After getting Maile’s outfit ready — and poking fun at the Senate dress code — the two went to the Capitol for their big debut. The vote was held open to make sure Duckworth could get there, and some senators stuck around after voting to meet the baby and witness history being made.

“With the gallery filled with dozens of reporters peering down, a 50-year-old veteran with no legs wheeled herself onto the Senate floor and on her lap was a tiny 6-pound, 10-day-old little girl named Maile Pearl,” Klobuchar said in her speech, according to the transcript. “She had on a green sweater blazer and a pink baby cap, and she became the first child in the history of the Senate to make an appearance during votes on the Senate floor.”

Maile became a beacon of bipartisanship as soon as she was spotted, with senators from both parties rushing over to meet the newborn.

As Klobuchar put it: “Maile Pearl, who never even knew she was making history, but she did.”

More like this
Watch Jacinda Arden’s Devastatingly Honest Resignation Speech
By Sam Ramsden
The Ticketmaster Senate Hearing & Taylor Swift Tickets Debacle, Explained
By Jake Viswanath
Jennifer Coolidge Recites “Jenny From The Block” Beside J.Lo In Her First TikTok
By Jake Viswanath
This First Look At 'The Gold' Shows Jack Lowden In A Whole New Light
By El Hunt and Sam Ramsden
Get Even More From Bustle — Sign Up For The Newsletter
From hair trends to relationship advice, our daily newsletter has everything you need to sound like a person who’s on TikTok, even if you aren’t.