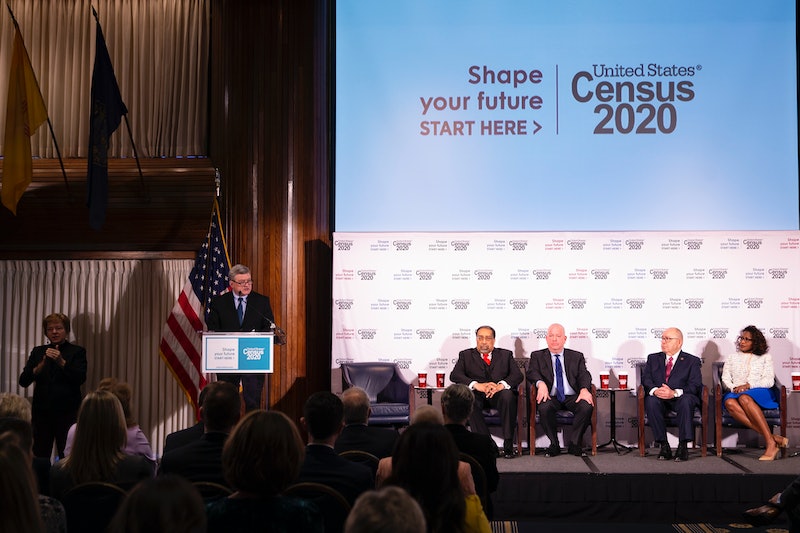 Census planning for next year is well underway, and lawsuits surrounding whether or not the 2020 version will include a question on citizenship are still ongoing. Many are concerned about a potential undercount, but the stakes could actually be far higher. A new Reuters report explains that if the citizenship question is included, the 2020 Census could be used to redistrict in a way that excludes non-citizens and dilutes the political power of immigrant communities.

Many of the arguments about the 2020 Census' potential citizenship question have focused on how it could depress the count of non-citizen immigrants and Latinos, who might be afraid to give their information to the federal government. That argument has been winning so far; on Friday a third judge ruled to block the question from being added.

But there's more to consider than just undercounting. Some Republicans see another potential use for the new data: redrawing state districts. All congressional and state districts are currently designed using total population, but some Republicans want to exclude all non-citizens from state redistricting maps in a way that could win more elections for their party at the state level.

The way that could work is that districts with large non-citizen immigrant populations could essentially be erased. And because most of those currently are won by Democrats — at least when talking Congressional districts — it would help Republicans. Some 95 of the top 100 districts with foreign-born people have elected Democrats to Washington, according to APM Research Lab. The same may be true for state districts.

Reuters reports that Nebraska state Sen. John Murante introduced a bill last year aimed at excluding non-citizens in redistricting, but it died because such data was not available. But it could be following the 2020 Census. Republican lawmakers in Arizona, Missouri, Nebraska, and Texas told Reuters they would be interested in using the information if it were available.

Republicans say that their goal is to have every vote be equal. In districts with many non-citizen immigrants but fewer residents eligible to vote, those who can vote get more of a say. Democrats, on the other hand, say it's important to represent everyone — whether they're a citizen or not — especially when it comes to things like schools and public services.

Currently at the federal level, this issue is moot, because the Supreme Court has found that citizenship cannot be taken into consideration when drawing congressional districts. They haven't ruled that way for states, though. In a 2016 case, Evenwel v. Abbott, they left the door open to states using counts of non-citizens.

According to Reuters, the Trump administration has been contemplating citizen-only redistricting since 2017 — even before it announced the Census 2020 question. Bustle reached out to the White House for comment.

None of this will happen without that citizenship question being added, however. The court rulings so far have all gone for blocking the question. But the Supreme Court will ultimately decide after hearings later in April, and Trump has appointed two justices, tilting the court further right. The administration has argued it needs the data to enforce the Voting Rights Act.

Until SCOTUS decides, the political power of millions of people across the country remains up in the air.