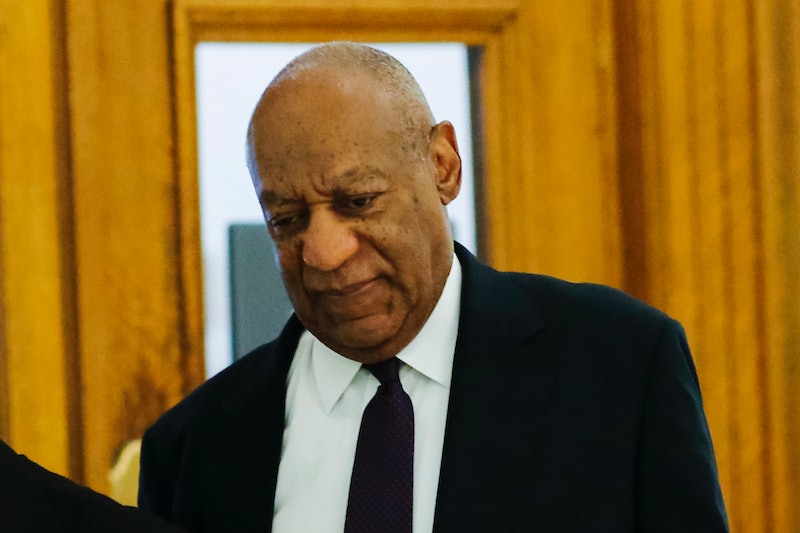 More than 50 years after the first alleged instance of sexual assault perpetrated by Bill Cosby, the actor is finally standing trial. Cosby is charged with allegedly assaulting Andrea Constand in 2004 and as the criminal trial (which began June 5) unfolds, one thing becomes increasingly clear: our justice system is not kind to those who make claims of sexual assault.

For starters, the statutes of limitations, which vary state to state, can be as short as one year and as long as 15 years for sexual crimes — but because many alleged Cosby victims waited over 20 years to come forward, their their alleged abuser cannot be charged. That is a huge part of why out of the over 60 women who've accused Cosby (all of whose claims, Cosby denies), only one woman's story has made it to trial.

The statistics could have foretold this outcome on their own: According to a 2015 study by The Rape, Abuse & Incest National Network (RAINN), the majority of sexual abusers are unlikely to serve any jail time. In fact, the report claims that approximately 99.4 percent of perpetrators of sexual abuse will not be jailed for their crimes. RAINN also found that it is far more likely that perpetrators of non-sexual crimes are likely to serve time, with statistics pointing to the fact that victims of those crimes are far more likely to report the activity in the first place — an assertion backed up by a 2013 study by the National Research Council which found that 80 percent of sexual assaults go unreported to law enforcement. And with those harrowing statistics about how many of the few reported cases actually result in conviction, it's no wonder victims don't often come forward.

During Cosby's sole trial for the alleged sexual assault of Costand, further claims of Cosby's inappropriate sexual conduct are being read in court in an attempt to help build the prosecution's case against the actor. On June 6, witnesses came forward to present corroborate the claims of Kelly Johnson, a woman who alleges that she suffered sexual abuse at the hands of the now 79-year-old entertainer during the 1990s (Cosby has denied these accusations as well). Johnson, her mother, Patrice Sewell, and her lawyer, Joseph Miller, were permitted to take the witness stand to offer details of Cosby's alleged violation of Johnson while she was an employee of the William Morris Agency, according to Jezebel.

Johnson, once known as "Prior Alleged Victim 6" in past documentation related to the accusations, was the only previous alleged victim allowed to testify in the criminal case against Cosby, according to the LA Times. During their respective testimonies, Johnson, Sewell, and Miller spoke in detail about Johnson's worker's compensation claim against Cosby that was launched back in 1996 when the allegations were first lodged against the famed actor. The accounts not only detail many accusations of forced sexual conduct, but were seemingly consistent with those of other Cosby accusers, including Constand; all three witnesses spoke of Cosby giving his alleged victims drugs or alcohol prior to the claimed assault. According to NBC News, Johnson, who first went public with her story under the pseudonym "Kacey" in 2015, claimed that she was feeling "paralyzed" and "helpless" as Cosby allegedly raped her. She further detailed her fear about speaking out, claiming: "I was very afraid because I have a secret about the biggest celebrity in the world at that time and it was just me, just me and my word against his."

However, despite the details explained by witnesses during Day 2 of the trial, and the fact that Johnson reportedly broke down crying while testifying, Johnson's allegations were met with disparaging remarks from Cosby's defense team, including claims that Johnson's story was inconsistent with remarks she made back in 1996. According to a report from NBC News, Cosby's defense lawyer Brian McMonagle appeared to discredit Johnson, asking her, "‘Did anyone tell you to get selective amnesia for this case?" Additionally, portions of her mother's testimony were deemed inadmissible from the record by the judge in the Constand case, as noted by Page Six.

What's most notable here is that no part of this story should be surprising. Look at any sexual assault case in the last few years and you will find defense lawyers attempt to discredit the alleged victims, poke holes in their stories, and question the timing of alleged victims' decisions to come forward. It's no wonder statistics like RAINN's find that few perpetrators of sexual assault are ever brought to justice.

The Cosby case is ongoing, but here's hoping that the trial and its conclusion will continue to shine light on the obstacles presented by an imperfect justice system.

Editor's Note: This article and its headline have been modified from their original versions.