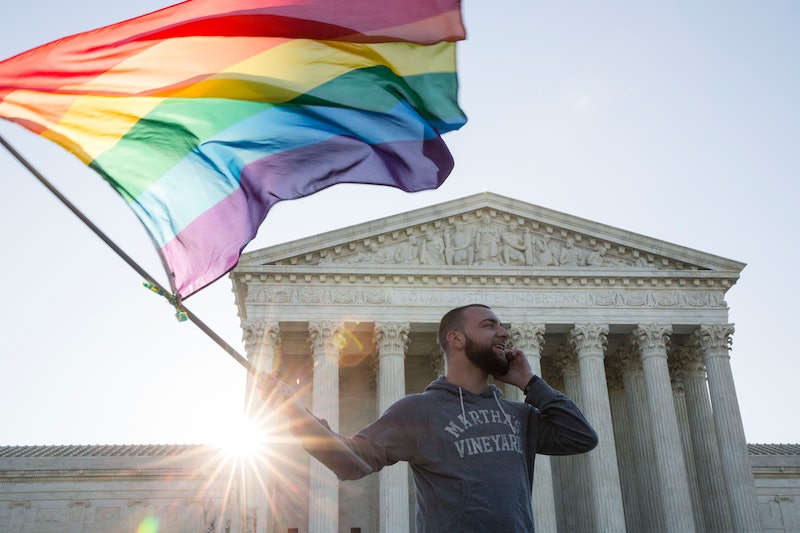 A new U.S. Senate bill aims to make the census more inclusive of LGBTQ Americans. A group of Democrats plan to introduce the Census Equality Act on Tuesday, seeking to add new questions to the U.S. census surrounding sexual orientation and gender identity.

"The spirit of the census is that no one should go uncounted and no one should be invisible," Sen. Kamala Harris (D-CA) said in a statement announcing the bill. "We must expand data collections efforts to ensure the LQBTQ community is not only seen, but fully accounted for in terms of government resources provided."

Sen. Tom Carper (D-DE) will join Harris in introducing the bill, along with 15 other Democratic sponsors. The 2020 census will include categories for same-sex couples for the first time, and the Census Equality Act aims to expand federal data collection beyond that. If successfully passed, it would add questions about sexual orientation and gender identity to the census by 2030, along with the American Community Survey by 2020.

Data collection comes into play when distributing government resources and enforcing civil rights protections. However, some data experts worry that the newly specific census data could be used to discriminate against LGBTQ folks, NPR reports. For example, employers in states that don't explicitly outlaw workplace discrimination could potentially use the data to see how a prospective employee identifies.

The bill would require the U.S. Census Bureau to protect the data in the same way the government protects other data, however. LGBTQ rights organizations including the the Human Rights Campaign (HRC), National LGBTQ Task Force Action Fund, the The Trevor Project, and American Civil Liberties Union also have come out in support of the proposed legislation.

Last year, Harris and Carper sent a letter to the U.S. Census Bureau asking why it hadn't yet included sexual orientation and gender identity on the national census, although multiple federal agencies had requested the bureau consider doing so.

Their new bill builds upon that letter by asking the Senate to mandate the change.

"We have a responsibility to ensure the information collected by the census accurately reflects who we are as a society and that everyone is counted fairly," Carper said in a statement. "Today, despite the fact that roughly 10 million Americans identify as LGBTQ, the community is left unrepresented on the census. In order for our government and the businesses that drive our economy to work for the American people, they must have the most accurate and comprehensive data on those they serve."

It's unclear how the additional questions would be worded on the U.S. census. The bill's text defines the term “sexual orientation” as "homosexuality, heterosexuality, or bisexuality," while the term "gender identity" is defined as "the gender-related identity, appearance, or mannerisms or other gender-related characteristics of an individual, regardless of the designated sex of the individual at birth."

Along with combating discrimination, Carper and Harris' joint statement says the improved data on LGBTQ Americans could help increase that community's representation in elected offices nationwide, as well as ensure that resources such as Medicaid, Section 8 housing vouchers, and the Supplemental Nutrition Assistance Program (SNAP) adequately cover LGBTQ folks.

“It's absolutely critical that we have the hard data needed to find solutions and address the unique challenges Americans face based on their sexual orientation or gender identity," David Stacy, HRC's director of government affairs, said in a statement of support for the bill. "The Census and American Community Survey are crucial tools to meet these needs."