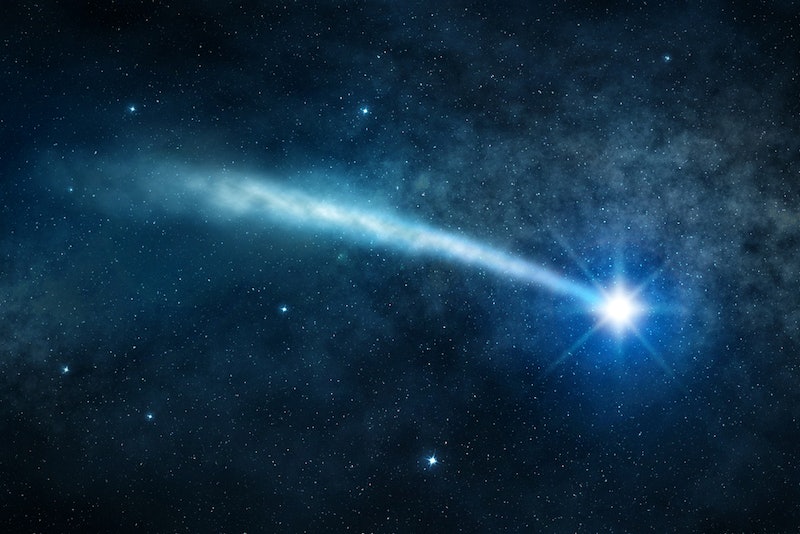 Even the galaxy is getting into the Christmas season this year. Beginning on Dec. 17, the so-called "Christmas Comet" returned for one of its periodic flyby visits, one of the closest comets to whiz by Earth in recent history. The comet, officially dubbed 46P/Wirtanen, first appeared in the sky on Dec. 17 about 7.1 million miles from Earth, the closest it's been and will be in centuries, and should be visible through Dec. 22 — if you know how to look for it. This mass of ice, dust, and rocks has been given its nicknamed based on its unique bright green color and its timing when passing by our planet. And like anything else going on in the galaxy, the Christmas Comet will affect you in specific ways based on your zodiac sign.

The green shade of this comet is not common. While we wish the reason behind the color was something more festive, it's actually not that exciting: Popular Mechanics says that the green is due to the fact that this comet is made up of a unique chemical mixture that includes a substantial amount of cyanogen. That green glow is actually a cloud of cyanogen gas interacting with ultraviolet light from the Sun.

So what does this have to do with your horoscope? Bustle spoke with astrologer Lisa Stardust, who explains, "The comet will be soaring through the constellation Taurus, resting on the Pleiades, who are 'the Seven Sisters' resting on the shoulder of the Bull. The Bull is Zeus (in disguise), who has sworn to protect them from Orion’s advances."

Below, Stardust explains how each zodiac sign will be affected by the Christmas Comet: