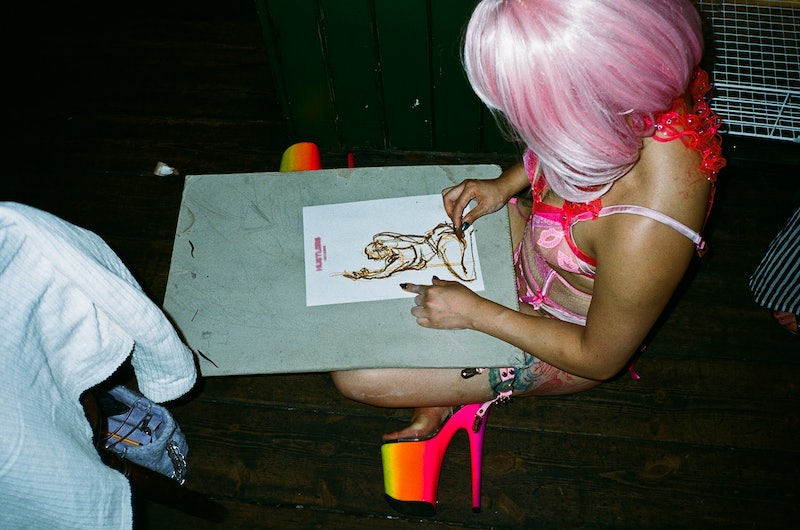 Critically acclaimed box-office success Hustlers, the movie based on the true story of a group of strippers who band together to scam their Wall Street clients, has stirred up a lot of conversation. While critics have heralded it as "a refreshing example changing attitude towards sex work," a number of real-life strippers have been left conflicted. But whichever way we view the film, the fact remains that sex work is a demonised and precarious occupation in the UK due to restrictive legislature, conservative campaigners, and sex worker exclusionary radical feminist groups.

In a cultural climate that leaves sex workers high and dry, it’s no wonder that strippers and lap dancers are choosing to mobilise amongst themselves, putting together organisations such as the East London Strippers Collective (ELSC). The ELSC aims to "challenge societal attitudes towards strip club activity by uniting performers, creating their own working conditions, and empowering dancers."

With a multi-pronged approach, the ELSC offers support to strippers in London and across the UK by connecting them with one another, actively campaigning for their rights in the workplace (with the help of members-led trade union United Voices of the World), and opening up discussions about working conditions through their flagship life drawing classes.

"There’s an obvious connection between hot naked women and drawing naked people," Samantha says. "Yes we have people who show up to the classes would go to the strip club anyway, but we also get a lot of young professionals who want to do life drawing for a birthday or a fun night out — those are the people who are quite important because you never know what kind of influence they have."

Offering what ELSC describes as a "rare and uncommon glimpse into [the stripping] world," the classes give attendees a chance to actually meet strippers in real life. "We’re not horrible sirens or succubus women who want all your money," Samantha explains. "Alongside all the strippers who perform at the classes getting fair pay, the session also plays a really helpful part in breaking stigma."

For Sasha Diamond, a pole-dancing veteran with 11 years experience, the judgement she receives remains one of her biggest frustrations. "People just think we’re dirty; they believe that we must’ve been forced to work as a stripper," she tells me. As a result, Sasha has had to develop a thick skin, particularly as a black woman. "I’ve got to work harder than anyone else but at first I didn’t see it," she says. "We’ve got to work hard to get that one dance that will get us £20 and when you’re telling the managers, they don’t care — they just tell you to walk away or ignore it. It depletes you and when customers come in, you immediately think, 'I’m not going to go for him because he’s not going to go for me.'"

However, sometimes the racism Sasha experiences is too difficult to ignore. "One time, I was working at a club and a group of guys came in, with one of the men clearly trying to entertain his clients," she explains. "So naturally, all the girls were around the group entertaining and one guy just turned around, looked at me and said, 'I don’t do darkies.' I just felt so embarrassed and worthless."

Due to the fact that strippers are categorised as "self-employed" or "independent contractors," they are unable to access basic workers rights, including annual leave, a guaranteed basic wage, protection from being fired, and access to legal recourse. This leaves very little room for reporting discrimination in the workplace such as the incident Sasha describes.

Strippers often have to pay a club in order to work there and, on top of that, the managers will take commission from them. Samantha explains that the amount a stripper pays is dependent on when they arrive at the club. “If you show up earlier, you won’t have to pay as much but you’ll be wasting time when no one’s there. Show up at 12, you’ll pay almost triple and only be there for 5 hours,” she says.

Strippers often have to pay a club in order to work there and, on top of that, the managers will take commission from them

During a night's work, dancers tend to perform on a pole or do a stage show five to eight times, along with 20-30 lap dances, and potentially some time with a customer in the VIP area. “When you cash out after a night’s work, the club will then work out how much owe them, most likely taking about 50% of all transactions,” Samantha tells me. “If I walk out with £600, the reality is that I made £1,200 that night.”

These kind of working conditions can be traced back to changes in the law more than a decade ago.

The Licensing Act of 2003 replaced all previous legislation and took away local authorities' power when it came to the licensing of strip clubs. It also "put the clubs in England and Wales in the same category as cafés and bars, meaning they could only be stopped from opening if they attracted crime, were a nuisance or endangered the public," the BBC reports. This in turn meant that the number strip clubs around the country increased significantly and, as ELSC member Stacey Clare previously told the Independent, "a lot of people didn’t like that." As a result, campaigning from conservative and sex worker exclusionary feminist pressure groups ramped up.

Five years later, provisions made in the Policing and Crime Act 2009 gave the licensing powers back to local authorities. If they chose to adopt the legislation being suggested, they were allowed to regulate strip clubs under their new classification as "Sexual Entertainment Venues." In the period following on from this, many councils introduced a “nil policy,” meaning that they could restrict the number of clubs in their area.

Predictably, this led to the closure of many establishments, worsening working conditions and heightening competition, as there were now far fewer places to get jobs.

Despite strip clubs shutting down, certain groups are still fiercely campaigning. After the Policing and Crime Act 2009 was adopted, for example, a group called Not Buying It released a document encouraging all councils to adopt a "nil policy," describing strip clubs as having a detrimental effect on "the women performing within them, women in the immediate vicinity and women in wider society."

“It just makes me so angry,” says Millie*, a Newcastle-based member of the ELSC. “I don’t think you can call it feminism if you’re going to exclude a certain group of women because you don’t agree with it.”

When speaking about the adverse effects these anti-strip groups and policies are having, Millie points to New Zealand, where sex work was decriminalised in 2003. As a 2007 report from the University of Otago’s School of Medicine shows, almost 65% of the 772 sex workers who participated said they felt more able to refuse clients. On top of that, over half said police attitudes had changed for the better following the law change, meaning they were more likely to report a "bad incident" to them. And the benefit of this was seen in action when, in 2014, a New Zealand sex worker won a landmark case against a brothel owner who was mistreating her.

Millie explains that "groups here in the UK don’t listen to the opinions of sex workers. They think it’s morally wrong without listening to what real workers have to say."

That's why, for Millie, Sasha, Samantha, and all the other women I spoke to, the existence of ELSC is so crucial. "It provides a supportive environment where we can all come together and unionise," Sasha says. "We can stand up for better working conditions, not being ripped off by club management. We can provide each other with advice on how we can better demand our rights because the fact remains: sex workers work."

*the interviewee's name has been changed to protect their identity.

Update: A previous version of this article misrepresented the involvement of the Women's Equality Party in an investigation surrounding Sheffield and Manchester strip clubs. It has been updated.