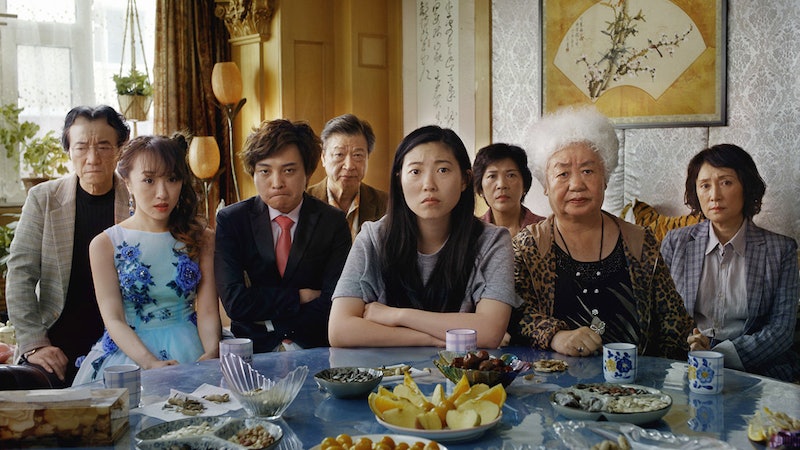 The Farewell, which comes to theaters July 12, is an emotional journey towards coming to terms with the impending death of a family member. The story follows Billi (Awkwafina) as she flies to China for a wedding and tries to figure out how to say goodbye to her paternal grandmother, Nai Nai (Shuzhen Zhao), while still maintaining the lie her family concocted: keeping Nai Nai's fatal cancer diagnosis from her. And though the film has been making audiences weep since it first premiered at the Sundance Film Festival, screenwriter and director Lulu Wang, whose own personal story is the basis of the movie, says that making The Farewell was actually a joyous experience for her.

Sitting on a couch at A24's New York City offices and occasionally pushing her clear-framed glasses up by their bridge, Wang says that fictionalizing this painful part of her life was unlike actually living through it again. It was more like therapy.

"If felt like a cathartic, communal [experience]. Grieving and laughter, all of those things — like an extension of the wedding itself," she says.

Like Billi, Wang moved to the U.S. with her parents at a young age — away from family and life as she once knew it. A real cousin's wedding was also an excuse to gather everyone together without revealing that they all also wanted to see their grandma one last time before she passed.

"It was a very isolating experience when I was in China alone, and I felt like no one ever understood me because I was the only pure American in the family with pure American values," Wang explains matter-of-factly. As the movie shows, her upbringing is a source of conflict within the family, because of the clash of Eastern versus Western values, individualism versus the family unit, and different takes on "right" versus "wrong." But while Wang felt alone back then, she found comfort in having the cast and crew view the experience from her perspective in the process of shooting The Farewell.

"Everyone saw my side of the story, literally, because they were there to finance or to make this movie," the filmmaker says. "And so, in many ways, it was really joyful to have these people who understood my voice and my story and collaborate with me to tell it."

Despite the overall positivity, there were still some tender, and painfully sentimental moments to capture on film, including Billi breaking down and confronting her mother. Her outburst is not just about the lie the family is telling her grandmother. Billi also reveals that she has repressed resentment towards her parents for uprooting their lives and never fully explaining their move to the U.S. in the first place. It wasn't a direct translation from Wang's life, however, but one example of the ways in which she used the film to process the events and emotions it depicts.

"I never had that real confrontation in my life, and never really even vocalized those feelings until I made the movie," says Wang. "And so I think it's really cathartic, in a way — therapy to be able to talk about a lot of the loss I felt coming to this country."

But make no mistake: though The Farewell is based on true life events, it's not a memoir or a biopic. "When I directed Awkwafina, it's not like I told her to play me." Wang explains. "I think [Billi's] based off of me, only in the sense of who I was in that moment, and what I was experiencing, which was a sense of failure in my personal life and career and carrying that weight into this farewell with my grandma where she may never get to see me do anything successful."

Wang emphasizes that she had to constantly find the balance between being truthful and being respectful of her family's privacy and comfort. "Sometimes it's hard to do both," she says. But in making the film, she realized she could still be true to her story without sticking to all the exact details. "Just because you tell a factual movie doesn't mean it's a truthful movie, and just because you tell a truthful movie doesn't mean it has to be 100% factual," says the filmmaker. "We're not making a documentary. It's not journalism."

Wang's parents, who saw the movie at Sundance earlier this year, were happy with the result. "I think that they would probably make the film differently if it was them, but they know that it's my version of the story, so they're just really proud," she explains. Wang also shares that, at first, her dad didn't think their family's story was worth telling, especially with the many diverse narratives even just within their Chinese-American community.

"My dad, when he read the script, he was like, 'This is very authentic, but it's so boring. Why would anyone care?'" she recalls. "He watches Die Hard, and things like that. So I had to explain to him that a movie wasn't always just Die Hard, that people are interested, and they were giving me money to make the movie."

Needless to say, Wang didn't add any big explosions to her family drama. "It's been rewarding just to be able to say that I made exactly the movie I set out to make," she says. "I fought really hard to make a very specific movie not knowing if people would respond."

But, luckily, people have responded in the most heartwarming way. Beyond tears in the theater and any form of congratulations, the best reaction Wang has gotten so far was from a barista who had watched The Farewell at Sundance.