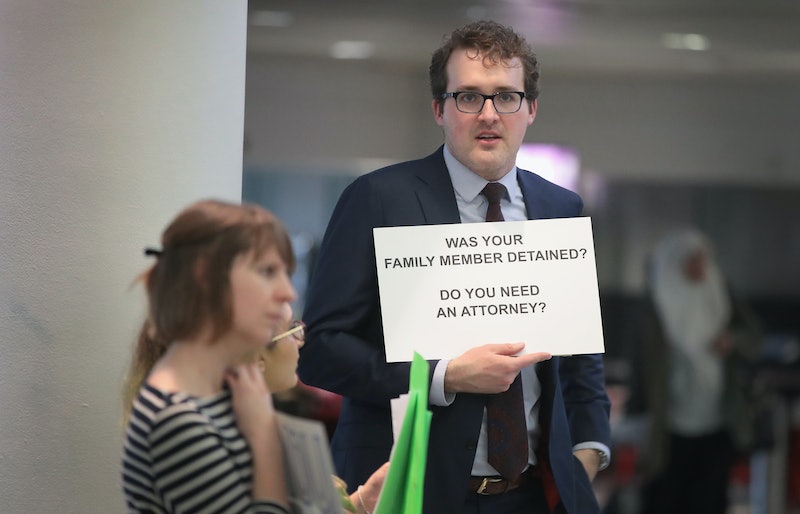 President Trump's travel ban caused chaos in airports throughout the country, with more than 700 travelers detained and a slew of lawyers working around the clock in order to protect those detainees' legal rights. But that kind of representation is now in jeopardy, as the Justice Department is reportedly attempting to use a legal loophole to stop the airport lawyers from representing immigrants in deportation cases. Bustle has reached out to the Department of Justice for comment.

The Justice Department has sent a cease-and-desist order to the Northwest Immigrant Rights Project (NWIRP), whose attorneys represented many of the Trump detainees in January. The order argues that the project's work is in violation of a Justice Department regulation that was initially intended to crack down on unethical lawyers who try and scam clients without providing legitimate legal help.

The details of what's happening here are complicated — but they're also extremely important, as the outcome could imperil thousands of immigrants' ability to get legal representation in the future.

At the heart of this issue is the fact that non-citizens don't have a constitutional right to legal representation in the United States. In an attempt to rectify this, a handful of nonprofits have sprung up to offer temporary, emergency legal representation to undocumented immigrants.

This kind of service was absolutely vital after Trump's travel ban: For a period of time, there was widespread confusion among officials about what exactly to do with those detainees, and ultimately the ban itself was struck down as unconstitutional. Working around the clock in those critical few days, NWIRP lawyers prevented many of those detainees from being deported.

Crucially, though, these attorneys don't represent their clients in the long-term or for the entirety of their legal proceedings; their goal is simply to step in during emergency situations and help immigrants make a legal case for themselves in court. Unfortunately, this is the same model of legal assistance that's often abused by dishonest, unethical lawyers looking to make a quick buck by defrauding vulnerable clients — such as undocumented immigrants.

The Justice Department has a rule, unveiled in 2008, that allows it to crack down on scam lawyers like this. The point of the rule was to protect against abuses by unscrupulous lawyers — but now, it could be used to hinder organizations like the NWIRP from helping undocumented immigrants such as the airport detainees. The DoJ's argument hinges on the fact that these emergency immigration lawyers are providing temporary but non-committal legal aid, which is the same type that scam lawyers often use.

A judge issued a temporary restraining order against the DOJ's cease-and-desist letter on Wednesday, so for the time being, the order has been thwarted. But the broader lawsuit surrounding the DOJ's actions is still ongoing, and if the courts rule in the administration's favor, it could pose a dire threat to organizations like the NWIRP — and the ability of immigrants everywhere to obtain adequate legal representation.