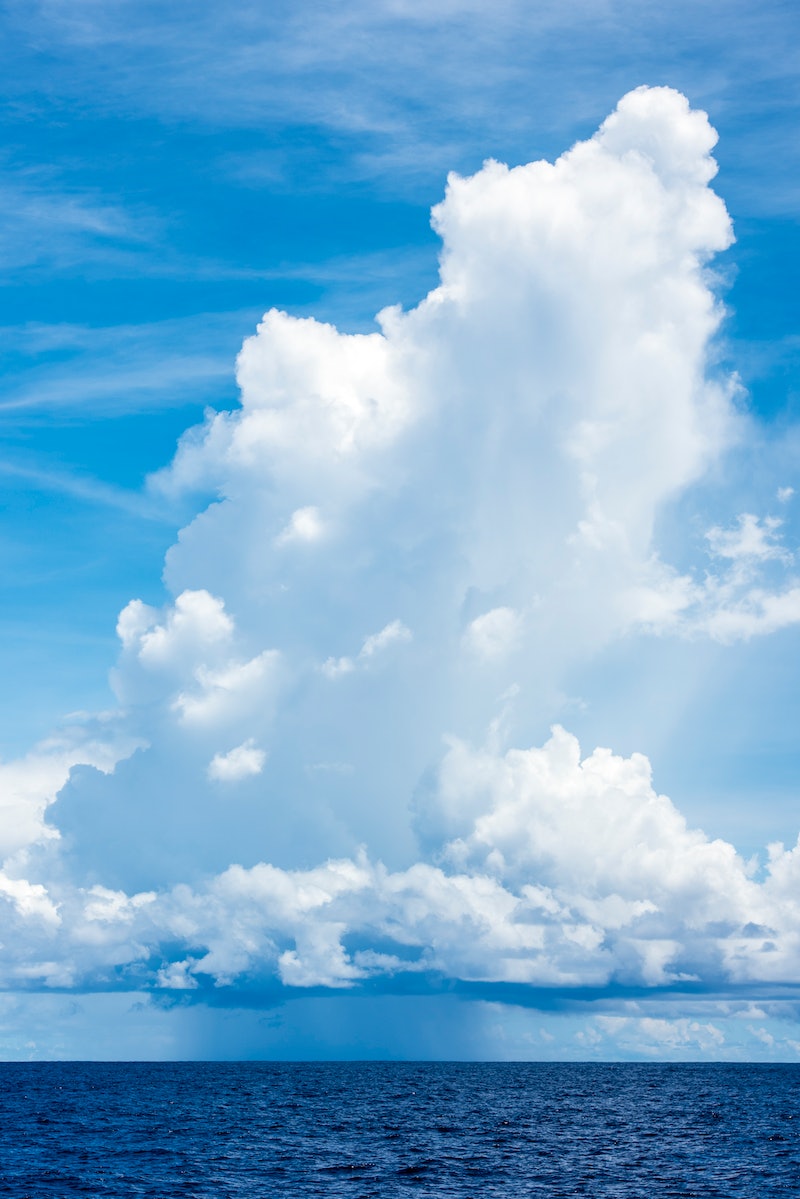 Do you feel major change on the horizon? November has been a heck of a month astrologically, so let's review: Venus ended its retrograde (yay!), Mercury began one (urrrgh), lucky Jupiter moved into its home sign of Sagittarius (yay again!), and we had that crazy full moon in Gemini on Thanksgiving, ushering us out of Scorpio season and into Sag season, the final sun transit before we hit the winter solstice. The vibes (and tensions) have been high indeed! And TBH, it feels like we're ushering in an entirely new era. On Nov. 6, the North Node and South Nodes (aka, our lunar nodes) in the zodiac moved into the signs of Cancer and Capricorn, respectively — so astrologically speaking, it makes sense that we're feeling the winds of change and opportunity. The Nodes will transit through these signs until May 5, 2020, so we'll be spending a while here. This will affect the babies born during this time, for sure, but how are we going to be affected since the Lunar Nodes moved into Cancer and Capricorn earlier this month?

First things first: What are the lunar nodes? In a birth chart, the North and South Nodes — also known as the lunar Nodes or the "Nodes of Fate" — represent the lessons you've learned coming into this life as well as your karmic destiny as you continue to grow (here's an explainer on the Nodes, if you need it). The Nodes' transits in general, though, also indicate where the current series of lunar eclipses will be. Because of their placement, the two Nodes will almost always fall in opposite zodiac signs. So the North Node represents our destiny and what the future holds for us, while the South Node, conversely, represents the comfort zone you'll have to grow out of to reach your North Node-highest potential. Bustle spoke with astrologer Lisa Stardust, who specializes on this topic (she authored the Eclipse Guidebook, which is all about the Nodes of Fate and available exclusively at The Hoodwitch). "The North Node is what we need to bring in, [and the] South Node is what we need to release," explains Stardust. "You have to compensate both Nodes in order to be happy and successful."

The Nodes' recent transit is obviously going to majorly affect all the babies born for the next year and a half, as the placement of the Nodes in one's birth chart indicates a person's life path, karma, past life baggage, and the lessons they're destined to learn in this lifetime. But just because this transit doesn't reflect the Nodes' placement in your natal chart doesn't mean you're not going to majorly feel this energy shift. Bustle also spoke with astrologer Aliza Kelly Faragher, author of The Mixology of Astrology: Cosmic Cocktail Recipes for Every Sign. “The impact of this Nodal axis varies based on your chart — but regardless of which domains it activates, the central theme will ask us to balance emotional security with steadfast determination.” So we're all going to need to understand the energies of this transit, as we'll be feeling it, too.

"The North Node in Cancer will require us to be able to give and receive emotional support," explains Stardust. "The South Node in Capricorn will want to act as a savior to others, as the sea-goat is the cosmic rescuer, always watching and looking out for those in need." Cancer, which is a domestic, maternal, sensitive sign, is contrasted by Capricorn, a hardworking, paternal, hyper-determined sign. Cap is like, "OK, time to work your ass off and get a good job so you can be successful. Cause I love you." Meanwhile, Cancer's like, "I'm going to cuddle you and make sure you feel nurtured and emotionally supported so you can be happy. Cause I love you." Guess what? For both of these signs, safety and security are huge themes — it's just that Cancer works on that security emotionally and family-wise, while Cap supports it through hard work and discipline.

So the North Node is officially in Cancer, which, as noted, is a very motherly sign that's focused on family and craves emotional security. "Allowing oneself to be vulnerable and put familial/ancestral concerns first will be the core focus of the North Node in Cancer," shares Stardust. "Our moods and views may change every few days with the Moon, however, one this is certain: We will all want to feel protected and safe, and conversely, be helpful to those we care about." It's going to be a good time to collectively look to the "family" in your life, and to embrace the ebbs and flows of your ocean of emotion. "Understanding emotions and being emotionally intelligent is the fundamental issue when dealing with the North Node in Cancer, as we are asked to work on how we express/share/understand our feelings," continues Stardust. Don't run from your feelings or bury them in work. Feel them, as you'll need to work through these and other vulnerable issues in order to grow.

"The South Node represents what we need to let go of. It’s also the energy we fall back on," explains Stardust. With the South Node entering the Saturn-ruled, fatherly sign of Capricorn, you're going to have to work a bit harder to not "rescue" everyone around you or lose yourself in your work ethic. "The lesson here is to not give too much of your time playing the role of the cosmic lifeguard for others, [and to] find a balance in which you don’t always have to pick up the slack and help people out of a jam," advises Stardust. "Focus on your needs and feelings as well. Don’t work too hard, allow yourself to spend time away from the office. Take more time away from the daily drudge to unwind at home bundled up in bed watching Netflix and eating ice cream." I won't say no to that. As much as you may be inclined to focus on your goals (our society is incredibly goal and productivity focused, so it's not your fault!), the North Node is Cancer is asking us to evolve out of this habit and instead, allow ourselves and others to feel their feels. Don't let the South Node's current Capricorn influence allow you to get overworked and overwhelmed simply out of habit. Spend some down time at home, and give others the space they need to be in their feelings, too.

Overall, this is a major shift, and we'll be collectively learning that we can't just stay in work mode nonstop in order to gain the security we crave. We must also focus on our emotional foundations — our home, families, and inner feelings — as these are equally important to our stability. "The North and South Nodes in Cancer and Capricorn, respectively, correspond with stability and ambition," explains Faragher. "This nodal axis reminds us that our choices are a negotiation, not a sacrifice." The next year and a half is a great chance for all of us to put our emotional and family lives first in a more well-rounded effort to achieve our goals and build ourselves a solid foundation.