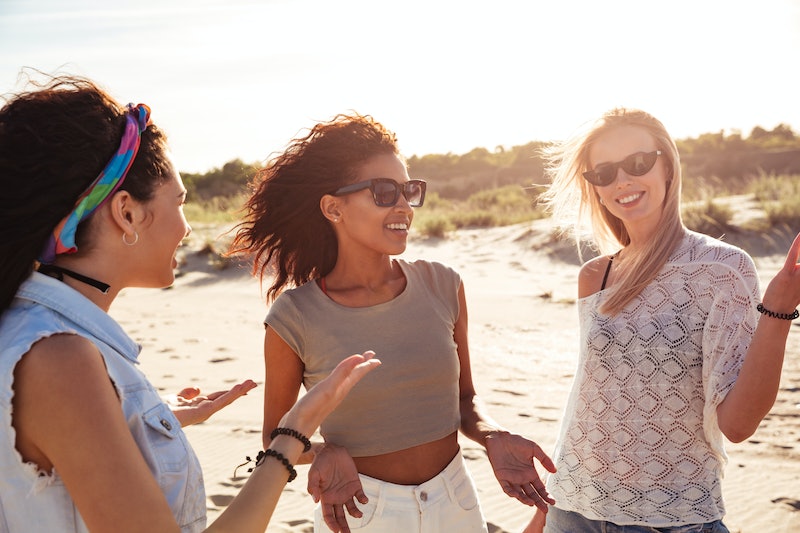 July is the lucky host to two new moons, giving us two opportunities for revelatory breakthroughs and emotional growth. That said, the new moon in Leo won't have the same effect on all of us. How the new moon on July 31, 2019 will affect you will differ depending on your zodiac sign, as our astrological temperament programs us to be influenced by different factors and respond uniquely to different stimuli. Some signs will feel intensely outwardly inspired by the month's second new moon, while other signs will feel more subtle, inward effects that are far less noticeable.

The one thing each sign has in common on the last night of July and the first night of the new lunar cycle is that we'll all feel profoundly confident putting our dreams and desires in the forefront of our minds and missions. According to astrologer Lisa Stardust, with the absence of a visible glowing moon in the night sky for the second time in one calendar month, we'll all naturally turn our attention to the self and the future that we want for ourselves will come into clear view. That said, how we respond to that image will vary. With the help of Stardust and her astrological predictions for each sign, here's how you can expect to feel during the July 31 new moon, and what that future image will inspire in you:

If you feel anything different under the new moon, it's going to be some positive energy that makes you want to go out and be social. According to Stardust, fun is going to be at the forefront of your interests during this time, and you should definitely lean into the cosmic energy and connect with friends or be open to meeting new people. This will serve you well for the next lunar cycle.

Feeling crafty? Dying to put the skills you learned on Fixer Upper to good use? Stardust tells Bustle that Taurus is going to be "in the mood to redecorate now and take on a new project in the home this week."

Though you're always dealing with gossip, Stardust warns that under the new moon it might be more intense. But don't worry, the kinds of things that are going to concern you are actually things that you know the truth about. So technically you're going to be in a position to squash rumors and set the record straight for those around you.

The new moon might add some stress to your financial standing, but according to Stardust, you'll have people willing to step up and help you with a loan of you need it. You're not alone even though it might feel that way.

With the new moon in your house, "the light shines on you and you are on the road to becoming a superstar," Stardust tells Bustle. Subtext: Your super human strength will be in full flex during this time, so keep living your best life and celebrating the last licks of Leo season.

We're getting awfully close to Virgo season, so Stardusts suggests that this sign "takes time off now to reevaluate and rest under this luminary." You've got Virgo season to do some soul searching, just take this reflective time to be peaceful and clear your mind.

Though you like spending time with people you're comfortable with, Stardust says that "your social circle is changing up," so you should "be open to meeting new people who can become friends in the future." It might not be comfortable at first, but it will be worthwhile.

If you're looking to move up at work, stay extra focused on your performance during this time. According to Stardust, it's likely that "a new position at work is opening up, allowing you to get a promotion and raise," so make sure you're perfectly aligned for that opportunity. Now is the time to shine at the office, so pull out all the stops.

"A higher minded pursuit will do you good. Crack open a book or take a yoga class," Stardust suggests. On July 31, reach for a book instead of the remote, as you're more likely to absorb what you're reading and be inspired by it in a progressive way.

Now is not the time for you to go on a shopping spree, as Stardust warns that "money matters are coming to a head." Instead, spend some time planning out your financing for the next month so that you don't find yourself in a similar position next month. It's nothing a little planning can't fix.

"One-on-one intimate relationships are leveling up now, so be prepared to take relationships to the next level," Stardust tells Bustle. Your relationships have been progressing for some time now, but with the dark moon in the sky, it will become abundantly clear to both of you that things are moving forward.

According to Stardust, your social life at work is going to improve under the new moon, and your relationship with your colleagues will blossom and transform. This will help you feel more stable at the office, so if your goals are to stay with the company long term, you'll feel more confident in that goal now.