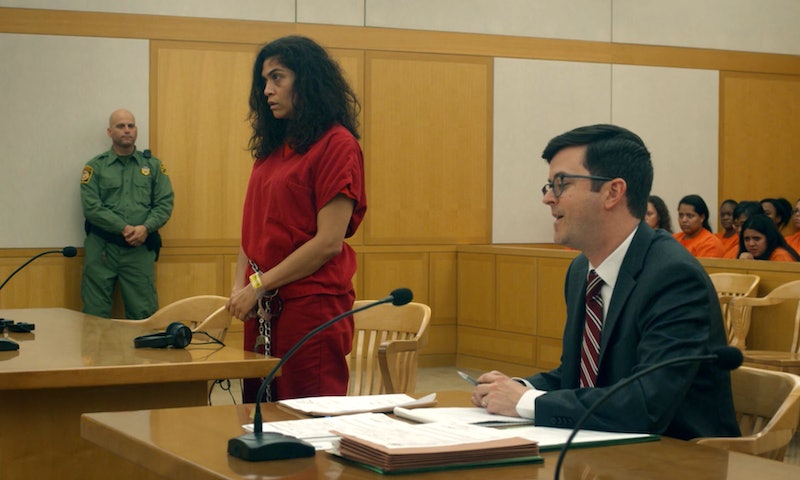 When Orange Is the New Black first premiered back in 2013, fans were quickly sold on the hilarious, and often heartbreaking, portrayal of life inside of a women's prison. Suzanne, Pennsatucky, Cindy, Flaca, and Maritza, just to name a few, felt like old friends the minute they popped up on screen.

But aside from the romance, rivalries, and jokes about awful cafeteria food, OITNB also examined the nuances of complicated social and political issues, from police brutality to the availability of tampons in women's prisons. This legacy was maintained all the way through to Orange Is the New Black's final season, which was written, filmed, and released in 2018 and 2019, at the height of the rollout of President Donald Trump's family separation policies. True to form, OITNB addressed the issues surrounding immigration under the Trump administration by expanding its universe to include a brand new group of inmates — all of whom are immigrants awaiting deportation hearings in an Immigration and Customs Enforcement processing center.

Carolina Paiz, an Orange Is The New Black writer who worked on the the immigration storylines this season, spoke with Bustle about how she and her team constructed the detainees' plotlines and addressed current events as realistically as possible. Even the way they blended Litchfield Max and the detention center was heavily researched, so that old characters could interact with the new and it wouldn't just be a silly plot device.

"The idea of having our inmates cook for the detainees came from an interview we did with a Honduran woman who had been sexually trafficked into the United States. She had been in a detention center where men from a nearby prison did the cooking, on site. We knew immediately this was the perfect way to integrate our two worlds," Paiz says.

Most of all, Paiz and her team saw the final season as a way to advocate for immigrant rights, and determined that the best way to do so would be by depicting their experiences as realistically as possible. "For us, speaking with detainees, hearing stories from our consultants, and reading so many real life accounts provided us with a grounding and inspiring engine to all of our detainee stories, and served as constant reminders to be as authentic as possible at every turn," Paiz says.

Paiz walked us through how she and her team researched the immigration storylines, found inspiration for some of the most compelling new characters, and how they collaborated with set designers and legal experts to get everything just right.

Season 7 is set partially in a bleak, single room ICE detention center that is connected to Litchfield Max. The center also includes courtrooms where detainees, including kids separated from their parents, represent themselves at deportation hearings.

During a tour of the Adelanto ICE Processing Center with Freedom For Immigrants, the writers were both inspired and appalled. Paiz says that the men's wings looked more like a traditional prison, but the women's wing was different.

"It was one large, depressing room with bunks and showers and tables all grouped together. There was no personal space, no place to hide. We knew we wanted to use this for our story. Our art department, the brilliant Malchus Janocko and his team, then did a lot of research to come up with the final look that perfectly captured the bleak space that we intended."

"Because these hearings do not allow outsiders or media presence, we wanted to shed a light on the ridiculous callousness of this policy on the show. Unfortunately, this was one of the cases where truth was so heartbreaking, we didn’t need to add anything — we just needed to show it," Paiz explains. "We did take the liberty to add a gavel and remove the Judge’s Chambers in service of a couple of jokes — but the rest is depressingly real."

Throughout the season, a woman named Santos is continually trying to communicate with ICE staff and fellow detainees. She is obviously distressed, but no one speaks her language. It's not until Episode 11 that ICE staff find out she was raped on her way to America, and she's now pregnant and wants an abortion. When staff refuse her request, Fig procures an abortion pill for her from her own doctor.

"One of our writers, Merritt Tierce, is a fierce reproductive rights advocate and was passionate about telling this important story and getting it right. We knew about several women who had been denied healthcare and/or the basic reproductive freedoms that are currently legal in the United States. This is, in part, because detainees are often not afforded the same rights as Americans even though they’re being detained on American soil."

"We were all very clear on what the stakes were for both Fig and the OB-GYN who gives her the prescription. Though what these two women did was illegal, we ultimately felt that they would choose to follow their moral compass instead of the law," Paiz says.

As for the lack of translator for Santos, that too, was the result of research. "Santos is from Guatemala, a place that has 28 local dialects. And that’s only one country. Our legal consultant had talked to us about cases where it was particularly challenging to find translators for all of the different languages and dialects from around the world. We wanted to explore what it would feel like for everyone to keep living their lives while she was powerless to communicate."

Maritza is picked up in an ICE raid and detained with Blanca early in the season. Though she staunchly insists that she was born in America, that turns out to not be true, to her own surprise. She is later deported to Colombia as punishment for passing out the phone number of a legal advocacy organization to fellow detainees.

For Diane Guerrero, who plays Maritza, this story was "particularly poignant," Paiz says, given that her own parents were deported when she was a teen. "We wanted to make sure we showed the abrupt and shocking reality of what it’s like to be uprooted from the only country you’ve ever called home."

"Maritza’s story was partially inspired by Phal Sok, an amazing activist and former detainee who came to speak with us, sharing his story about how he was brought to America as a 3-month-old when his parents fled war-torn Cambodia. Later, as an orphaned teenager, Phal was charged with armed robbery. After completing his prison sentence as an exemplary inmate and thinking he was finally on his road to freedom, Phal was apprehended by ICE and put in a Detention Center, and put on the road to deportation instead. But Phal had never set foot in Cambodia; in fact, he’d been born in a refugee camp in Thailand. All he knew was life in America. He was later pardoned."

The storyline about Maritza spreading a hotline number was based on a real story, too. While touring the Adelanto Processing Center, the writers handed out cards with a free legal hotline run by Freedom For Immigrants, though they were warned that if ICE staff saw them do so, they would reportedly shut down the hotline. Paiz says they weren't exaggerating — the hotline at a different center was shut down as punishment. "Freedom for Immigrants has since started up another hotline, but it is far more costly now without the 4-digit extension," she adds.

4. The Lack Of Communication

Between the lack of working, free phones or access to computers, the women rely on underground means of communication to simply get a lawyer or to alert family and friends of their whereabouts.

"The appalling lack of communication with the outside world was not used as a dramatic device. The reality is that people in immigration detention are completely cut off and isolated, and ICE makes it extremely difficult for attorneys, advocates, and family to communicate. One of biggest surprises from our visit to the Adelanto ICE Processing Center was the fact that detainees are treated as prisoners and yet are not afforded the basic criminal rights that prisoners are given: access to a free phone call and access to an attorney."

As for that sorry-looking computer on the show? Also realistic. "ICE claims that they at least give detainees access to a “'legal library' so they can figure out their immigration cases. This legal library amounts to nothing more than a software called LexisNexis. One of our writers, Brian Chamberlayne, is a former attorney and told us the software was too complicated even for him."

5. Karla's Quest To Be With Her Kids

New character Karla (Karina Arroyave) is a single mother detained with Blanca. A former legal assistant, she furiously researches how to best handle her deportation hearings in order to be reunited with her sons, who are now in foster care. Viewers last see Karla making her way back to the U.S. border after being deported in order to get them — and meeting an ambiguously grave fate.

"We read about a woman whose American-born child was given up for adoption while she was fighting her way out of immigration detention and knew this was the kind of story we wanted to shed more light on. As for where Karla’s story ended, this was hotly debated in the room. We all knew that Karla would risk anything to be reunited with her children, but we weren’t sure what we wanted to happen to her as she crossed over."

"But after reading and listening to so many accounts of deaths in the desert, we knew we couldn’t ignore that reality any longer, as painful as it was, and [decided] that it was worth showing. Whether or not Karla dies in the desert is up to the viewer to decide. But let’s just say that if she lives, it’s going to be a harrowing and treacherous road ahead... Even though family separation as a general policy has since been scaled back, it is still happening, and not just at the border. We hope Karla’s journey helps spark a conversation about it."