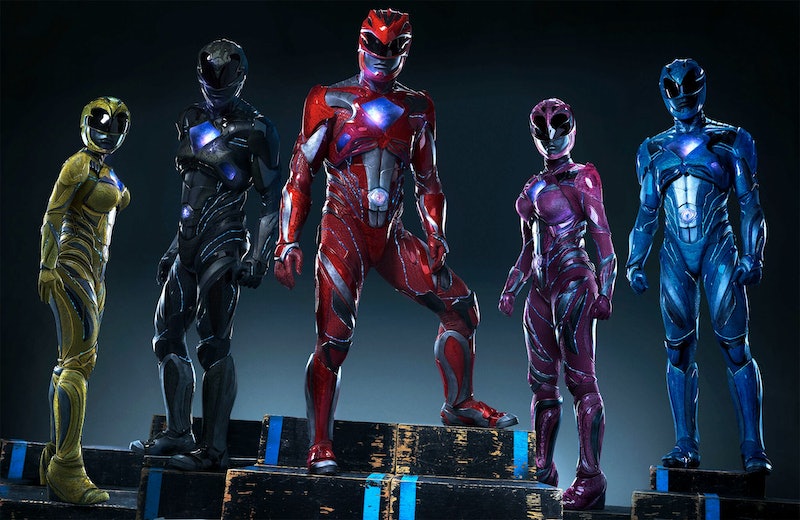 In my parents' basement, there are boxes filled with precious items that defined my youth — Power Rangers paraphernalia. From costumes to action figures to VHS tapes, these items are all worn, not just from time but from obsessive use. The Mighty Morphin Power Rangers original television show was my after-school, weekend, and holiday go-to, and when I first saw that a Power Rangers movie was in the works, my inner seven-year-old put on her old Halloween costume and did a few kicks. After all, Power Rangers helped me develop my feminism and beliefs in equality. It was, and is, exciting to think that a movie would contain the same progressive, powerful ideals — i.e. that a group of multi-racial, gender-mixed teens could come together to save the world — that affected me and other young viewers so much.

When I was growing up, seeing a group of male and female friends, made up of multiple races, get along and save the world together was huge for me. True, looking back, some of Power Rangers was hokey and included some cultural insensitivity that is more obvious now then it was back then, but as a kid in the '90s, the show had a major impact on my life. The series' portrayal of teenagers working together, be it to fight actual evil, the school bullies, or pollution, was a culture I might not have been exposed to otherwise. I lived in an incredibly small town and went to an even smaller, and incredibly homogenous, school. Seeing a show that brought different people together for a common cause — even an unrealistic one — was crucial exposure for me.

The show's focus on bullying, too, was hugely important. While Kimberly Hart and Trini Kwan's environmental activism was mind opening, the real impact for me came from how Kimberly, aka Pink Ranger, dealt with the ridiculous bully duo of Bulk and Skull. The pair's treatment of Kimberly, particularly Bulk, shifted from teasing to standard bullying to sexual harassment, depending on the episode. Yet Kimberly would give back better than Bulk and Skull gave to her. She wouldn’t back down, and most importantly, the show never excused the bullies' behavior. It didn't give into the still-widespread idea that boys tease girls because they like them, unlike so many other pieces of pop culture.

In elementary school, during my prime Power Ranger-watching years, I had to contend daily with a boy that relentlessly bullied me. I would come home in tears, but my teachers brushed it off as a "boy just being a boy." But watching Kimberly, I took inspiration from her interactions with Bulk and Skull. She didn’t care if Bulk and Skull "teased her because they liked her" — that didn’t make what they did OK. If they did like her and didn’t know how to express it, that was their problem, and didn’t mean she had to put up with their insecurity. It helped me understand that despite what was being taught to me, I could, and should, stand up for myself. Nothing else in my world except Power Rangers was sending this message.

True, the '90s also saw feminine icons like Buffy and cult favorites like Xena, but I was too young for those shows. And most of the kids shows of the time, like Boy Meets World and Clarissa Explains It All, followed very intense constructs of gender norms. While it was great to see Melissa Joan Hart talk about pimples and the difficulties of having a little brother, there were few shows, for girls my age, that showed us being strong, authoritative, and spunky. For the most part, to be a single-digit-aged girl in the '90s was to have few badasses to admire.

But even if there were other shows that featured these kinds of heroines, I don't think they would have resonated with me in the same way. While the Power Rangers dealt with monsters spliced from Japanese television, the battles that really hit home for me were the ones that took place at school. Most of the time, the team didn't use super powers to deal with the bullying, and they spent their spare time contributing to causes they thought were important. But most of all, they were a close group of friends whose diversity and equal treatment of each other was normal for them, not unique.

Although the Power Rangers movie doesn't take up the issue of bullying in the same way, as Bulk and Skull aren't present, the film still features many of the progressive ideas that were present in the original series. Not only does one Ranger fall on the Autism spectrum, but a Latina Ranger is dealing with her sexuality. That is huge for a major studio film, and will, I hope, have an impact on young audiences.

For the Power Rangers, standing up to bullies, being strong women, and having a multi-racial group of friends was just a normal part of life. I hope that for the young boys and girls watching the new movie, they'll recognize that this can be the norm for them, too, and take those lessons as what's really so mighty about the Power Rangers.