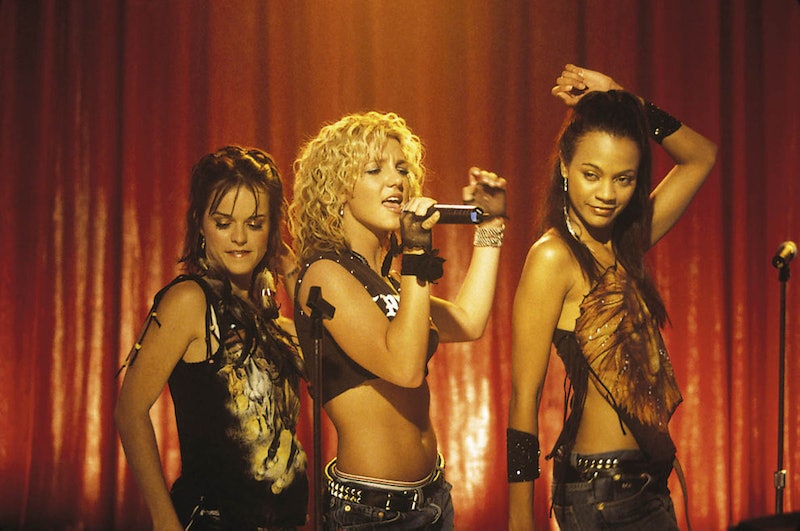 Britney Spears continues to slay in 2017, but one of the most important moments of her career so far has to be her starring role in Crossroads. Way back in 2002, Spears played the lead in the road trip movie, which was written by the legend that is Shonda Rhimes. With a script by the Grey's Anatomy creator, it's easy to see why Crossroads developed a loyal following over the last fifteen years. And as the movie focuses on the lives of its three female protagonists, there's a sneaky feminism in Crossroads that's still relevant today. If you needed an excuse to rewatch one of the most amazing releases of the '00s, this is it!

For anyone who's managed to avoid this movie thus far, Crossroads is about Lucy, Kit, and Mimi, who used to be best friends, but drifted apart in high school. After graduation, they met for one last time to dig up a time capsule, or "wish box" as they called it, that they buried when they were kids, and memories of their close friendship came flooding back. And while Crossroads might not appear to be overtly feminist, there's a strong undercurrent running throughout the movie, thanks to a female-focused script by Shonda Rhimes.

As Bustle writer Mary Grace Garis points out, Rhimes's influence on Crossroads is evident throughout the movie. Despite being a pop star vehicle with a bubblegum tone, there are several ways that Crossroads exudes feminism, separating it from other teen movie fare. For instance, Zoe Saldana's performance as Kit is crucial, and strengthens the film a great deal. As an outspoken woman of color, Kit refuses to be put down, or settle for less than she deserves. From punching her cheating fiancé, to supporting her besties throughout their road trip, Saldana's Kit is a kick-ass character of feminist proportions. She's a total precursor to Grey's Anatomy's Miranda Bailey.

Crossroads is also an incredibly empowering movie when it comes to female sexuality. Despite planning to lose her virginity to her lab partner (played by Justin Long) after graduation, Lucy (Spears) decides to wait. Long's character tries to coerce her into it, but Lucy stands up for herself, deciding that she deserves more. She wants magic, even if that means waiting.

Similarly, Mimi's pregnancy is a bold move for a character in a teen movie. Despite being heavily pregnant, Mimi decides to keep the baby and pursue her dream of being a performer. When it's eventually revealed that Mimi's pregnancy was the result of rape, the friends continue to support each other, and stand up to the rapist. Mimi refuses to let another person ruin her future.

Mimi, Lucy, and Kit are all very different people, but their mutual respect and unending support for one another helps to give Crossroads a sneaky feminism that could easily go unnoticed.

Ultimately, Crossroads is about following your dreams, in the face of adversity, hardship, and total heartbreak. From being abandoned by parents, to being abused or mistreated by those they trusted, Mimi, Lucy, and Kit refuse to be beaten down. They take control of their destinies, and won't settle, giving the MTV classic an empowering message that still works in 2017.