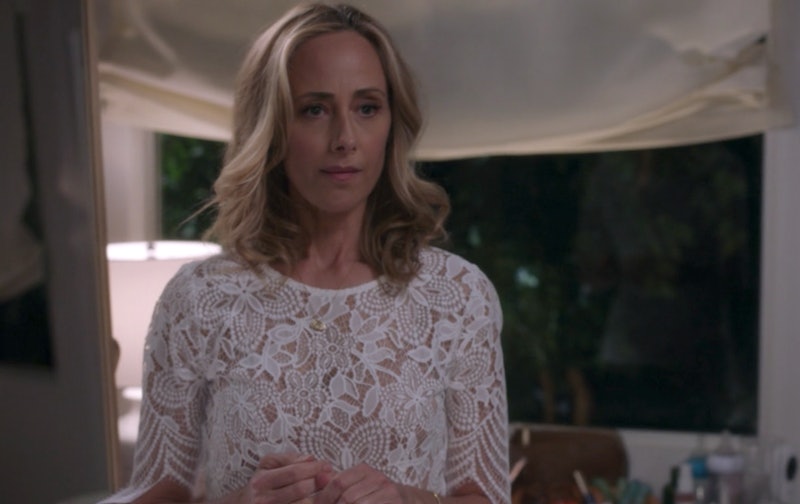 With Grey's Anatomy ending four episodes early but Station 19 finishing its season, fans got a peek at some of the storylines that Grey's would have addressed in those now-scrapped episodes. The Station 19 finale set up Grey's Anatomy Season 17 for some of the major character arcs, and the rest now has to be reworked, according to showrunner Krista Vernoff.

Vernoff told E! Online that some of the planned crossover stuff from Station 19's final episodes had to be cut since the storylines couldn't be finished on Grey's. And the dramatic planned Grey's finale, which reportedly had contained a major character death, is now also off the table. "We can't just pick up with the plan that we had for the finale as the premiere. I don't think that's gonna work," Vernoff said. "[It's] going to affect Grey's in the fall, like we had built to a finale that we didn't get to shoot."

In an interview with People, she added that she didn't want to give too much away about those lost Grey's storylines because she hopes to rework them and air them next season. However, since Station 19 has already hinted at some of the plot points, like Andrew DeLuca having bipolar, Vernoff felt comfortable confirming that storyline to People. "DeLuca was in a really manic state for an extended period of time ... after finally diagnosing Richard, [he] went from manic to depressed," Vernoff said.

At the end of Grey's Anatomy Season 16, which was cut short due to the pandemic, fans saw DeLuca crying on the floor and Meredith Grey offering to help get him home. She clearly still loves him, and his diagnosis is sure to wear on her, too. In the Station 19 finale, Meredith hinted at that in her conversation with Andy Herrera. "I have plenty of stuff in my own life. I could use a break," Meredith said when Andy started unloading her own trauma on Meredith.

Another big hint from the Station 19 finale about the future of Grey's came when Maya Bishop tried to win Carina DeLuca back. Carina had been talking to Teddy Altman when Maya interrupted and apologized for cheating on Carina and promised to be better from then on. Teddy implored Carina to forgive Maya, but Carina was hesitant.

"She cheated on me with her ex-boyfriend," Carina said.

"Forgive her ... if you love her, forgive her," Teddy responded.

Cheating hits close to home for Teddy, because she cheated on her fiancé Owen Hunt with her ex-boyfriend. When Grey's left off, Owen had just found out about the affair, and he called off their wedding. But Teddy didn't know that yet. That was all going to come out in future episodes. Based on how quickly Teddy wanted Carina to forgive Maya, it seems that Teddy might have been craving that same forgiveness in her own life from Owen. It could signal that in Season 17, Teddy will attempt to convince Owen to take her back much the same way Maya did to Carina. Perhaps even with the same line, "If you love [me], forgive [me]."

In an interview with Brief Take, Kim Raver (who plays Teddy) said that she can't wait for Season 17 to finish exploring Teddy's journey for forgiveness. "It's hard not having be able to show the beautiful way of her emerging out of this darkness. But I think it gives us so much for Season 17 and I’m so excited to really dive in," Raver said. "We'll be able to start in that place [where Teddy's wedding was called off] and really have her dig deep and figure out what’s going on with her." Raver even hinted at how Teddy will go about rebuilding her relationship with Owen. "She's going to have to really make amends and forgiveness is going to be a really big thing for her, and finding forgiveness for others," she teased.

Aside from the Meredith and Teddy hints, the rest of the Station 19 finale didn't delve too much into the Grey's storylines. We never got resolution after Jackson Avery was shot on the penultimate Station 19 episode, but considering that his on-and-off girlfriend, Vic Hughes, seemed fine in the finale, Jackson probably pulled through surgery on his leg just fine. As for that major character death that Grey's was gearing up for, it seems to be off the table for now. "I, at this point, do not have a plan to shake up the cast next season," Vernoff told Variety. "I feel like there's a lot of story moving forward for everyone."

That's a relief for sure. Now fans just have to wait until Season 17 to see how Teddy, Andrew, Meredith, and the rest of the cast's stories pick up where Season 16 left off.

More like this
Netflix Shut Down 'Bridgerton' S3 Rumours About A “Very Dark” Storyline
By Bustle
'The Queen’s Gambit' Season 2 Tweet Wasn’t From Anya Taylor-Joy
By Mary Kate McGrath, Jack Irvin and Grace Wehniainen
Shonda Rhimes Responded To The Surprise Exit Of A Day 1 'Grey's Anatomy' Figure
By Grace Wehniainen
Everything To Know About 'Only Murders In The Building' Season 3
By Gretchen Smail and Kadin Burnett
Get Even More From Bustle — Sign Up For The Newsletter
From hair trends to relationship advice, our daily newsletter has everything you need to sound like a person who’s on TikTok, even if you aren’t.