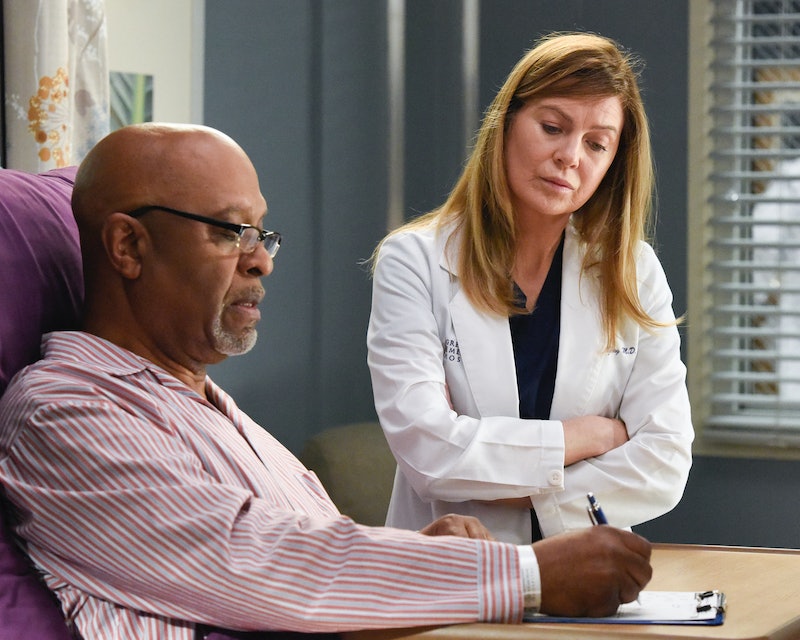 Grey's Anatomy's April 9 episode wasn't intended to be the Season 16 finale. But due to the ongoing coronavirus pandemic, the show was forced to shut down production and end the season early, leaving four planned episodes unaired. Fortunately, since Grey's Anatomy was already renewed for Season 17, any remaining cliffhangers will be resolved...it's just not quite clear when.

If this were any other year, the new season would premiere in September 2020, following the pattern of seasons past. However, they would have to resume filming in late July in order to meet that timeline, and no one currently knows if that will be possible. Still, Grey's Anatomy showrunner Krista Vernoff seems optimistic that they'll be able to return with more episodes at some point this year.

"We are disappointed that we don't get to complete our storytelling this season," she tweeted in late March. "The good news? [Episode 21] plays like a satisfying finale! It's not where we planned to end, but it's beautiful & the questions that linger we will answer next year." She then clarified that she meant next season, not next calendar year.

As for what to expect from the early finale, Grey's star Kim Raver told Entertainment Tonight that the scrapped episodes would have finally helped her character Teddy, who's currently cheating on Owen with Tom Koracick, find some clarity within her situation. However, now she doesn't think that storyline will "wrap up neatly."

Raver added that she's not sure if the four remaining original scripts will be incorporated into next season, or if the writing team will just decide to start fresh. "Maybe they will rework the scenes that they have ... I think we have some amazing stuff in the can," she told ET. "I think they will use some of those great scenes that we shot, but I also equally think that maybe they're thinking this is an opportunity to see how things played out and where they want to raise higher stakes and what they want to include. It's an opportunity to kind of rework the canvas."

In the meantime, Grey's spinoff Station 19 — which completed filming before productions began shutting down — will continue to air on Thursdays through May 14. The series frequently crosses over with Grey's, so that's a good way to get your fix while you wait for more news.

More like this
Shonda Rhimes Responded To The Surprise Exit Of A Day 1 'Grey's Anatomy' Figure
By Grace Wehniainen
The 'Freeridge' Cast Shared Their Hopes For A Potential Season 2
By Grace Wehniainen
'Succession' Season 4 Will Be An "Absolute Banger" According To Cousin Greg
By Bustle Staff
Everything To Know About A Potential 'Lockwood & Co.' Season 2
By Gretchen Smail
Get Even More From Bustle — Sign Up For The Newsletter
From hair trends to relationship advice, our daily newsletter has everything you need to sound like a person who’s on TikTok, even if you aren’t.