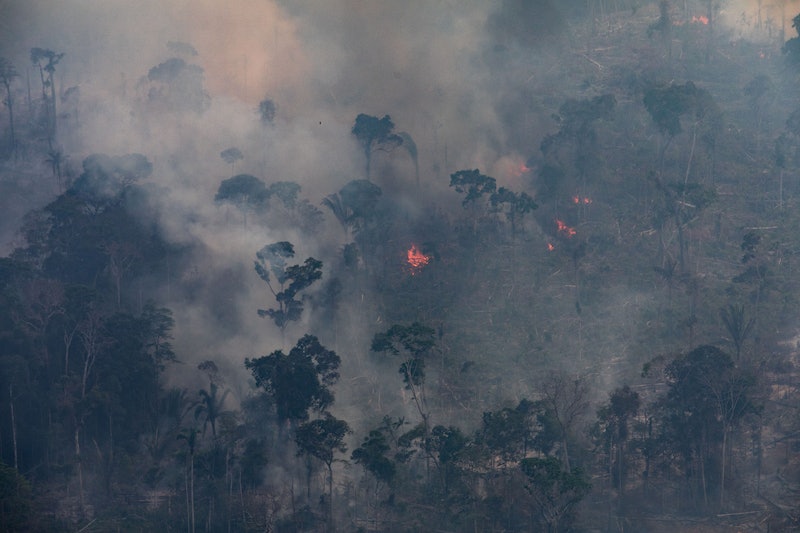 Earlier this year, the world was alerted to the horrific forest fires occurring in Brazil, home to the biggest rainforest in the world – the Amazon. There have been many theories and much speculation as to their cause, and now it's being reported that farming for UK fast food could be linked to Amazon rainforest fires. So, how has the West contributed to the disasters in Brazil, and what can individuals do to help?

Who could forget the horrific images and videos of parts of the Amazon forest being destroyed and engulfed in flames earlier this summer? And for the country's indigenous people, the pain and harm this caused can’t be comprehended. Sometimes it might feel like nothing can be done about something of this magnitude from the other side of the world, but these forest fires are a global concern and one that the UK has a part to play in.

Originally, it was thought these forest fires were an accident, as the Verge notes, but soon there were more reports from environmental campaigners that the fires were started deliberately for deforestation purposes, in an effort to make more land available for agriculture, specifically for soya beans. Many blamed the Brazilian government for not doing enough and even downplaying the scale of the fires. Brazil's Foreign Minister Ernesto Araújo, for example, said in a CNN interview, "the Amazon is not burning, not burning at all."

The BBC reports that the UK imports 2.5 million tonnes of soya beans each year. According to Greenpeace, the majority of soybeans are not for human consumption. The organisation reports that about 90% becomes food for animals such as cow, pigs, and chickens. Meanwhile, the BBC reports that according to Sustainable Trade Initiative, only 14% of the soya imports are "deforestation free," making it one of the lowest percentages in the EU.

Greenpeace Head of Forests Richard George told the BBC that fast food outlets could be among the biggest users of soya of this kind. "All of the big fast-food companies use soya in animal feed, none of them know where it comes from and soya is one of the biggest drivers of deforestation worldwide," he said.

But the UK isn’t solely to blame, U.S. democratic presidential candidate John Delaney believes his country also plays a big part in deforestation through the farming of soya beans. He said in an interview with Fox News, "The fact that U.S. farmers can’t sell soybeans to China has created an opportunity for Brazil to sell soybeans to China. As a result, farmers are tearing down the Amazon to grow soybeans.”

As the Guardian notes, in 2006 Greenpeace, along with other environmental groups, got agriculture traders to agree not to buy soya linked to deforestation in the Amazon. But some environmentalists believe this only increased deforestation in neighbouring Cerrado which, as WWF notes, is far less protected than the Amazon. And the National Institute for Space Research reported 19,925 fires in September, significantly higher than the number in the Amazon.

It is a scary to know that the largest rainforest and one of the most important ecosystems in the world, which is also home to 30 million people, is still being destroyed to feed farm animals for people in the West. There are steps everyone can take to help. In 2017, some of the largest global brands, like McDonald's, Kellogg's, and Walmart, signed the Cerrado Manifesto to stop any more deforestation. Checking where your meat and dairy is sourced and how the animals are fed is important, or better yet, eating more sustainably-sourced plant-based options will mean consuming soybeans from deforestation is even less likely.