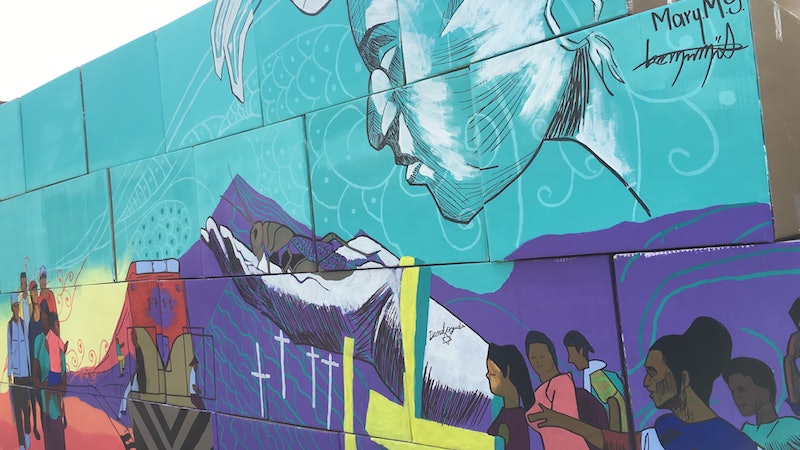 TIJUANA, MEXICO — Genesis, a small girl with long, black braided hair and beaming brown eyes, runs across a patio carrying a notebook filled with sketches and stickers. The 8-year-old shows her mother, Jacqueline, a page where she practices spelling. She spells all but one word right, having omitted the double consonant in the spelling of llaves, the Spanish word for keys. Genesis has been attending classes at a migrant shelter for women and children in Tijuana, Mexico, where she and her mother have been staying since mid-February.

Jacqueline, 28, says she fled Guatemala with Genesis after a gang member threatened them, claiming to know her daughter’s school location and schedule. (Bustle is withholding the last names of the women and children seeking asylum who were interviewed for this article for safety reasons.) Jacqueline says the pair successfully petitioned for asylum in the United States, but were sent back to Mexico to await their court date after being detained in a so-called hielera, or “ice box,” for three days.

“I was relieved that we were together while in detention and that she wasn’t taken from me,” Jacqueline tells Bustle in Spanish. But she adds that waiting out the asylum process in Mexico has set back her hopes of bringing a sense of normalcy back into Genesis’ life.

There are efforts in shelters housing migrant families to provide some structure for children like Genesis who are coping with the disruptive nature of forced migration. In January, the Trump administration rolled out a policy requiring asylum seekers who present themselves at the San Ysidro port of entry near San Diego to wait on the Mexico side of the border while their claims are processed. So for the first time, families are spending weeks at shelters while they wait for the appointments that will determine whether they can legally enter the United States. And the Trump administration plans to expand its policy to more ports of entry beyond San Ysidro in the coming weeks.

Genesis and her mother are staying at Instituto Madre Asunta, a shelter run by Catholic nuns for women and children. It offers bunk beds, three meals a day, clothes, shoes, access to phones, and medical assistance to families. Madre Asunta and shelters like it, which are often run by nonprofits, also work to provide educational and other services for children who’ll leave as soon as they’re granted asylum — or else return home.

Rosario Castro teaches children as young as 3 years old in basic subjects such as math, spelling, and Spanish. With a background in pediatrics and child care, Castro first taught at Madre Asunta 15 years ago, before taking a break to work for the Coalición Pro Defensa del Migrante, a nonprofit that helps migrants access shelters in Tijuana. Her latest teaching stint began five months ago, and she estimates that families stay at Madre Asunta anywhere from eight days to four weeks.

Castro says it’s common for children to discuss how long they expect to wait until their turn for an asylum interview or court hearing. At the same time, she sees how hard it is for some of them to abandon the routine they’ve built at the shelter once they get the green light to move on.

“The difficult part is when it’s their turn to leave the shelter,” Castro tells Bustle. “Sometimes they want to leave, sometimes it’s difficult for them.”

One of the children staying at Madre Asunta is Lisseth, an 11-year-old girl who migrated from Guatemala. For two hours each day, Lisseth joins Genesis and the rest of the older children to practice reading and writing. Castro organizes the children’s activities by age group: For the past few mornings, Genesis and Lisseth have practiced their spelling while younger kids practice coloring and making shapes with clay. What Lisseth says she enjoys most, though, are the soccer games a UNICEF worker organizes on the shelter’s patio.

Lisseth’s mother, Isabel, tells Bustle she likes that the classes at Madre Asunta keep her kids busy. “As children they can perhaps forget about the entire [asylum] process here in the shelter,” she says. “But as moms it is so frustrating.”

Like Jacqueline and Genesis, Isabel, 31, says she and her three children were held in U.S. immigration detention for five days before they were sent back to Tijuana. Isabel says she and her 5-year-old son first traveled to the border in November with a migrant caravan, after the father of her children threatened to kill her. Once she secured their place on an informal waiting list to apply for asylum, Isabel briefly returned to Guatemala to retrieve Lisseth and her other son, who is 6 years old.

Bustle reached out to the Department of Homeland Security and Mexico’s National Immigration Institute (INM), a federal agency, to confirm that Isabel’s and Jacqueline’s families were sent back under the Trump administration’s so-called “Remain in Mexico” policy. DHS declined to comment.

Aline Juarez, an INM spokeswoman, tells Bustle that 187 asylum seekers have been sent back through the San Ysidro port of entry so far. Thirty-nine of those asylum seekers are minors, according to Juarez, who also confirmed the group includes 35 families, the first of which were sent back to Mexico on Feb. 13.

Isabel and her children have an immigration court hearing scheduled for the end of March, as do Jacqueline and Genesis. The process of seeking asylum has gone slower than Jacqueline expected, though, so she says she’s asked her daughter to be patient. It’s a sentiment shared by other mothers at Madre Asunta, who tell Bustle they’ve fled gang or intimate partner violence in their home countries, only to encounter a restrictive asylum process that forces them to bide their time in Mexico. The mothers living in this uncertainty appreciate how the shelter is trying to set up children for a safer, better future. But these efforts, which not all shelters have the funding for, are only meant to fill the void until a child’s asylum case is resolved.

Jacqueline says Genesis would tell her during their journey up to Tijuana that she wanted to reach her uncle’s house in Los Angeles so she could study again.

"I didn’t think about whether my daughter would miss school,” Jacqueline says. “I left Guatemala to save my daughter's life.”