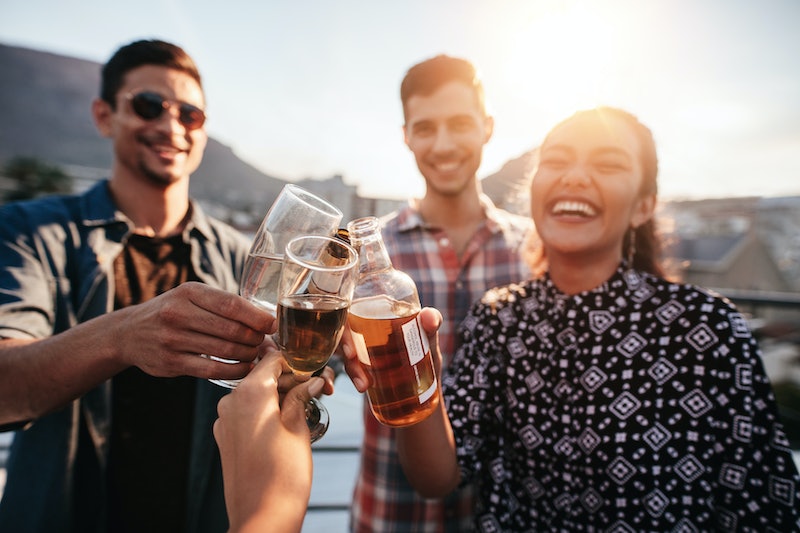 Whether dating apps are causing a "dating apocalypse" or are merely the easiest way to get a date, there's no denying these tools have been total gamechangers in the dating scene within the last few years. And even though dating apps are most popular among Millennials, according to a recent Bustle survey with dating app Happn of over 1,000 dating app users, 78 percent of women and 85 percent of men still want to meet people IRL. That's why for the second year in a row, Bustle is deeming April, "App-less April" and encouraging our staff and readers to delete their dating apps for 30 days and meet people the old-fashioned way: offline. With participants tracking their progress and tricks and tips from dating experts, we'll be helping you feel empowered to meet people IRL all month long. Today's topic: how to meet people at a party this weekend.

If you're single and looking for love, it might seem like the only option these days is to use a dating app. Although there's nothing wrong with being an online dating fanatic, you shouldn't feel like there's no way to meet people offline anymore — because that's simply not true. In fact, a 2017 survey of over 500 US adults from ReportLinker found that only eight percent of couples meet on dating apps —that's less than,sports/religious groups/hobbies (9 percent), bars (12 percent), work (15 percent), and through friends (39 percent).

If you need a break from the mania of online dating, celebrate "App-less April" by deleting your dating apps for a month, then see if you can make sparks fly offline, too. Whether it's through work, a club, or even just out at a bar, there are plenty of ways to meet someone IRL. One of the most underrated sources of potential romantic connections you can use to your advantage during App-less April? Your average house party. "Parties are great places to meet people," Camille Virginia, dating coach at Master Offline Dating, tells Bustle. "First, everyone there has been 'vetted' — someone you know knows them. That means a higher caliber selection of people, all in one place. Second, it's a casual environment. House parties make everyone feel instantly more comfortable — who doesn't enjoy being in someone's home filled with other people, good food, and drinks?"

Parties are an environment where mingling is encouraged, so there's ample opportunity to get out of your comfort zone and introduce yourself to some new faces. Even if you come with a group of friends, don't be afraid to break away from the crowd and make the rounds alone for a while, just to see if you run into someone interesting. There's no harm in making new friends — and if a conversation leads to a romantic connection, that's even better. There's one thing to be wary of, though: "The only bad part about meeting someone at a party is someone you meet will be connected to others you know, so if unfortunately you do date and then break up, they'll likely still be in your peripheral circle of friends," Virginia says.

While that's something to take into consideration, a hypothetical breakup is no reason to not approach someone. So how do you actually meet someone at a party? Follow these seven tips to make a real connection the next time you're at a party, trying to figure out how to get the attention of someone cute across the room.

It might be tempting to bring a posse of people to make sure you're not bored, but flying solo to a house party has its advantages, too. "Always go alone," Virginia says. "You definitely know someone at the party, but if you go with someone or find that person/group of people you know as soon as you step foot inside, you're going to stick by them the whole night and miss out on meeting all the new people around you. You can always find your friends later, but start off with walking in solo."

It might seem a little weird to scout out the perfect spot to meet new people, but there's nothing wrong with using a little strategy to give yourself a boost. "Head to [the] kitchen where everyone is [likely] gathering," Virginia says. "Grab some food or a drink so you have something [in] your hands and can busy yourself while figuring out which conversation you want to insert yourself into. Choose a group to join or introduce yourself to someone else grabbing grub and ask how they know the host of the party as an ice breaker to potentially longer conversation."

Speaking of the host, they can be an excellent tool if you happen to spot a stranger you're interested in right away. "You can also ask the host of the party [about a certain guest]," Virginia says. "Clearly they know who the attractive stranger in their home is since it's their party. Heck, ask the host for an introduction, maybe through a common interest they know you and the attractive person share."

If you see someone you want to talk to, don't be a wallflower. "Get close to them," Virginia advises. "Maybe that's sitting down [or] standing next to someone and starting a conversation with that person, and then after that conversation naturally comes to an end, turn to the person you're attracted to and start talking to them. So much easier and less scary to approach it that way as opposed to crossing the room and going straight up to the attractive person (though if you're comfortable doing that, go for it!)."

Thanks to all the good vibes that usually come with the party atmosphere, there's no reason not to strike up a conversation with an attractive stranger — they'll probably be more than willing to chat (and if they aren't, they might be a jerk anyway). There's so much to talk about with someone you just met, so don't feel awkward or overthink things too much. "Give the person you're attracted to a genuine compliment or ask them a question — like the obvious 'How do you know [the party host]?,'" Virginia says. "Break the ice, then let your natural curiosity flow with this new human you know nothing about and get to know them!"

When you're trying to impress someone new and attractive, it's normal to accidentally act 'weird' or unlike yourself — but the more 'you' you are, the more likely you are to make a real connection with someone. "Sometimes when people are uncomfortable in a social situation, they act like someone else or say things they wouldn't normally say," Virginia says. "Don't do that. Talk to people — even those you've never met before — like you already know them. [Use] the exact same tone, pitch, and conversation topics you would talk about with your friends. It's amazing how this instantly puts people at ease and makes them feel like they know you, and the conversation is so much more authentic and comfortable fro that point forward."

If the night is winding down and you've really hit it off with someone, don't be shy about opening up avenues for further communication. You don't need to get down on one knee and beg them to go on a formal date, but you can exchange contact info in a more subtle way — like using a shared hobby or interest as an excuse to trade numbers to chat more. But hey, if you're feeling bold and want to just straight up say, 'I'd love to get to know you more; we should hang out one-on-one sometime' then more power to you.

If you're taking the challenge and participating in App-less April, look at every day as an opportunity to make connections that you might not normally make. Parties might seem like just another occasion to have fun with your friends, but if you make the most of the upbeat, super social atmosphere, there's a good chance you'll meet someone new that might turn into a love connection someday.