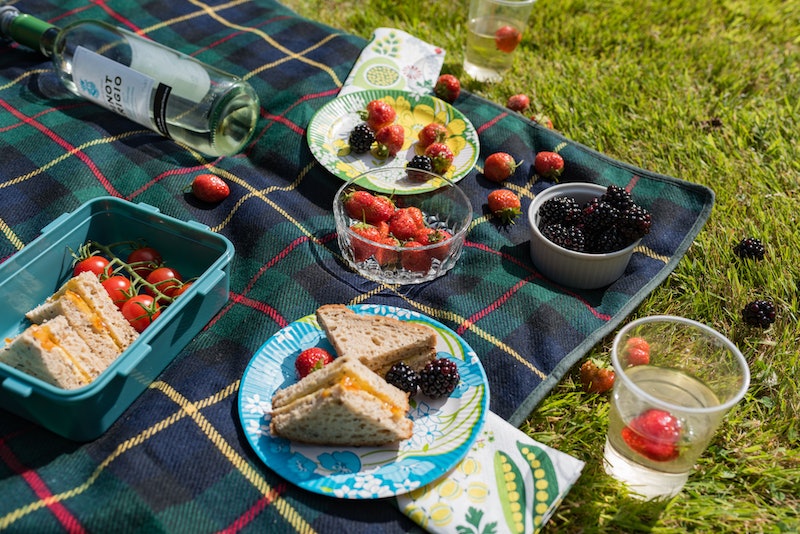 Enjoying a barbecue out in the sun is an essential part of summer, but health experts caution that you need to keep an eye on your crabcakes to prevent foodborne illnesses from ruining your fun. Keeping yourself safe from food poisoning at outdoor events requires a little more skill than protecting a spread indoors, but with some basic knowledge and a steady eye on the clock, you can keep your summer food-poisoning free.

Dr. Luther A. Bartelt, M.D., a professor at the UNC School of Medicine, tells Bustle that food is inherently at risk if it's outside of a storage environment, which of course means foodborne illnesses can occur year-round, anywhere and anytime food is not kept at a safe temperature. But because picnics and barbecues are generally held in hot weather, often in direct sunlight, your platter of fruit salad is very at-risk to grow bacteria that can lead to food poisoning.

How To Keep Food From Growing Risky Bacteria

Bartelt tells Bustle you should follow a two-hour/one-hour rule: "You should refrigerate perishable food after two hours, or one hour if it is above 90 degrees where it is sitting out." So, if that mayonnaise-laden potato salad has been out for a while, put that baby in the fridge ASAP.

If the idea of clock-watching while you're trying to enjoy yourself at an outdoor event stresses you out, set an alarm on your phone or an old-school oven timer to go off when it's time to put food away. Make sure you know what the temperature is going to be outside, and when it's possible, keep your food out of the sun. And for events where you're not close to a fridge, a cooler full of ice is going to be your BFF.

How To Safely Prepare Food For A Summer Barbecue

Though proper storage is key, there are other, less summer-specific food safety tips you should follow to make sure your event is as food poisoning-free as possible. Dr. Arlene C. Seña-Soberano M.D., medical director at the Durham, North Carolina, County Health Department, tells Bustle that folks should be familiar with the Centers for Disease Control and Prevention's (CDC) rules for preventing foodborne illnesses, which include a four-step process: "Clean, separate, cook, and chill."

"Wash your hands and surfaces where food is handled often. Don’t cross-contaminate raw meat, poultry, eggs or seafood with other ready to eat food items. Make sure your meat, poultry and seafood is cooked to the correct internal temperature. Refrigerate perishable food within two hours, or one hour if it’s above 90 degrees where the food is sitting out," Seña-Soberano says.

How To Safely Cook Meat At A Summer Barbecue

The CDC has a list of safe internal temperatures for meats, which includes 145 degrees Fahrenheit for whole cuts of beef, pork, veal and lamb, 165 degrees for all poultry, and 145 degrees for fish.

What To Do If You Get Food Poisoning From Eating Outside

Even if you take all these precautions, weird stuff can still happen. Or maybe you go to an event where you're not in charge of the food and someone slips up. Chances are, you're going to end up with food poisoning at some point in your life. "Most of the time people who experience symptoms of a foodborne illness get better without medical treatment," he tells Bustle. There's no doubt you're going to be miserable — symptoms include "nausea, vomiting, stomach cramps, and diarrhea," Bartelt says — but you're probably going to be A-OK. (However, if you're really feeling terribly, or if you/a family member who's sick is pregnant, a young child, elderly, or has a weakened immune system, a health care professional should be consulted, Bartelt adds.)

Food poisoning is the exact opposite of summer fun, but with these tips in mind, you'll be able to keep on keepin' on during those long, hot days while keeping the germs at bay.

This article was originally published on July 6, 2018