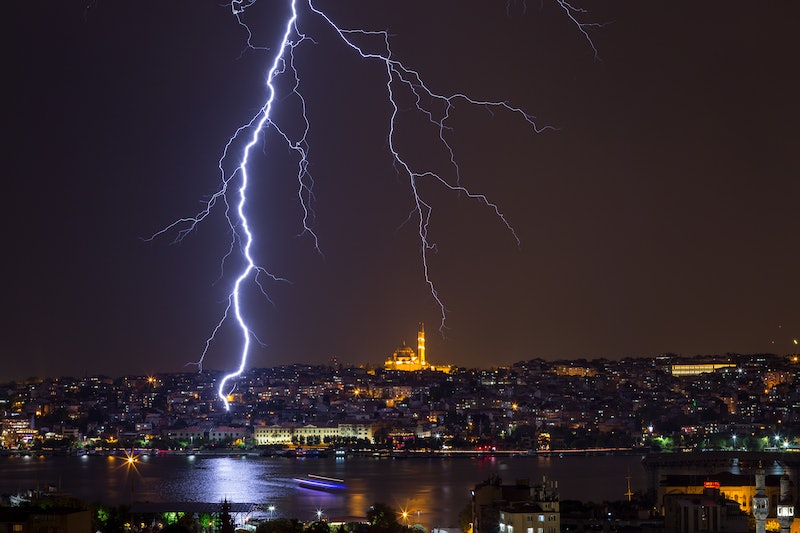 Though static season is generally confined to the dry, cold winter months, it's possible to get static shocks year-round — especially in an air conditioned room. If the mere thought of getting a static shock sends an uneasy wave of non-literal static electricity through your veins, you should have some tips and tricks to avoid getting a static shock up your sleeve — because yes, it can be avoided.

To put the very complex subject of static electricity simply: it's caused when two different surfaces are rubbed together, their charge can change. According to Sciencing.com, certain materials like glass, hair and fabrics (like polyester and satin) "give up electrons easily." What this means is that when they experience friction, aka, are rubbed together, electrons move from one atom to another. When this happens, some atoms get extra electrons which gives them a negative charge. Other atoms lose electrons which gives them a positive charge. The act of separating and moving "charges" like this is what we know as static electricity.

When two things have the same charge, they become repellant. A good example of this is when you rub a balloon in your hair, and your individual strands of hair stand up, and move away from each other. That's because they have the same charge and are repelling each other. They stand up to literally get as far away from your other hairs as possible.

If you're walking around with an excess of electrons, when you touch a metal (like a door knob) that has a lack of electrons, you'll get a shock. This happens because the extra electrons move from you to the knob, like a wire. That little shock you feel is actually the static electricity leaving you and landing on the door knob. This process can also happen when you have a lack of electrons and the surface you touch has an excess of electrons. Though a static shock can be intense enough to burn you or gentle enough to barely tickle your skin, most people hate the sensation. If that's you, here's a few easy tips and tricks to keeping yourself safe from static electricity:

By keeping the humidity in your home between 40 and 50 percent, you can seriously reduce the chance of being exposed to static electricity.

Rubber soled shoes work as insulators, which means that they end up keeping a lot of built up electricity in the body. Leather is a much more porous surface, so as you walk around you'll be not only collecting electrons, but releasing them as well, keeping your charge more balanced.

Though wool might feel dry, it's actually made up of a lot of water, which can act as a conductor and becomes a serious hotspot for static electricity. If you can't stand getting a shock, avoid it at all costs in the winter and opt for cotton.

If you've ever noticed that after you've walked around the grocery store for a while, your shopping cart seems to be possessed with electricity, it's a real thing. Metal shopping carts collect electricity as you push them around, so when you touch them with your bare skin, they give you a pretty noticeable shock. Using a plastic basket or trolly is the most efficient way to avoid grocery store trauma. .

More like this
The 8 Best Speakers For Record Players
By Megan Gray
The 5 Best Blankets For Puppies
By Jenny White
Amazon's Selling A Ton Of These Cheap Things That Make Your Home 10x Cozier
By BDG Commerce
The 5 Best Cordless Electric Snow Blowers
By Jenny White
Get Even More From Bustle — Sign Up For The Newsletter
From hair trends to relationship advice, our daily newsletter has everything you need to sound like a person who’s on TikTok, even if you aren’t.