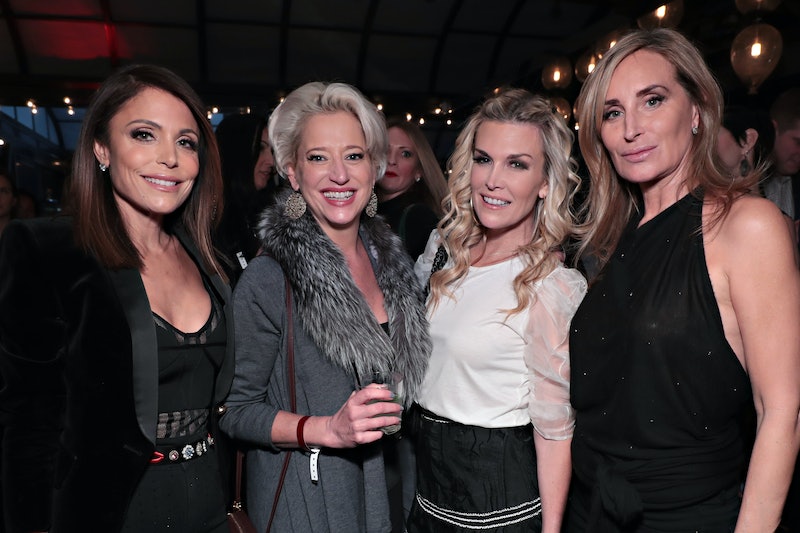 Everyone who watches The Real Housewives has the same few questions that cross their minds at certain times. "Did these people know the cameras were running?" is one, and another is "Did that woman just call her vagina a pistachio?" Probably the most pressing question people have is, "How do you become a Real Housewife?" That question of course, is one you're asking, because being a Housewife seems to be so awesome — just look at Erika Jayne.

Seriously, the women of the Real Housewives never fail to entertain fans of the franchise, and despite all of the fights and shade-throwing, people like Lisa Vanderpump and Bethenny Frankel would probably make even the most staunchly anti-reality TV people want to get on the show. They don't just let anyone walk onto the show though, sadly. In fact, the power in choosing which housewives largely lies in Andy Cohen's hands. Aside from hosting Bravo's late-night talkshow, Watch What Happens Live and each Housewives season's reunion shows, Cohen acts as the executive producer of the Real Housewives shows.

"I am involved in all of it," Cohen said on Bravo's web series, @sk Andy. Even though he has a big role in the casting process, an interview with a Bravo executive on the network's site revealed that a group of people make the casting decision together, and it even involves an audition process that everyone must go through — even Vanderpump, who was a total shoo-in.

First the contenders for joining the Housewives cast must audition with on-camera interviews. As the network's executive, Ryan Flynn, told the Bravo blog, they then narrow the list down based on the on-camera interview. Then they try out an at-home shoot to get a better sense of the potential cast member's life. As Flynn says, they ask "What does a day in the life look like for our top choices? You know [we] meet husbands, meet kids, meet friends ... You know what does that life look like?"

Flynn also told Bravo's blog that the executives prefer to cast people who have a tie into the preexisting cast members. The perfect example of this? Dorinda Medley, according to the TV executive. "It's always best to have a real-life connection and to have that history. And I think we definitely see that on The Real Housewives of New York City. Like it always felt like Dorinda was there, because in a way she always was," he said. He continued, "It always felt like if you just turned the camera a couple of feet one way or the other, Dorinda has always been there. And so that's why I think her inclusion has been so successful." It's true that the fan-favorite Housewife even made few cameos on the show before she became an official cast member.

No matter who you are, though, every prospective Housewives cast member has to go through an audition to get on the show. Even Lisa Vanderpump, whose Housewives fame led her to star in another Bravo show, Vanderpump Rules, had to audition. "They asked me twice to audition, and I said, 'Not for me, thanks,'" Vanderpump told Glamour in Jan. According to the restaurateur-turned-reality star, Jennifer Stallone, who Vanderpump called "Sly Stallone's wife" when speaking to Glamour, eventually helped convince the RHOBH star to audition. Good thing she did, too, because Vanderpump has become one of the biggest households names from Bravo's franchise.

Vanderpump's popularity from the show probably has to do with the fact that she fills all of Cohen's criteria for the perfect cast member. In a 2014 interview with Cohen, the TV executive explained to Nene Leakes from Real Housewives of Atlanta what he looks for in a potential Housewife: "Someone who is willing to be open, live their life fully in front of the camera, someone with a point of view, someone hopefully who's got a sense of humor or at least is funny or humorous, or different in some way," Cohen said on Watch What Happens Live with Leakes.

Cohen also added that it's important that a cast member is someone who "You know will have something to say. [They] won't be run over and will open their lives up to the camera and share something we haven't seen." If you're gunning for a spot on the Real Housewives, now you know what makes for a prime cast member.

As for whether or not the term "housewife" need apply to any of the cast members of the show, Cohen told Leakes that you don't even need to be married to become a part of the cast. "I think [the Real Housewives is] a little bit of a wink because 'housewife' is an old fashioned term and I think that we're turning it over on its head," Cohen said while speaking to Leakes.

The cast members on The Real Housewives are turning more than just the term "housewife" on its head. With all of the show's exciting twists and informal alliances, its stars have viewers' heads spinning. After the women get through Cohen and co's grueling casting process, they almost always deliver highly entertaining TV.