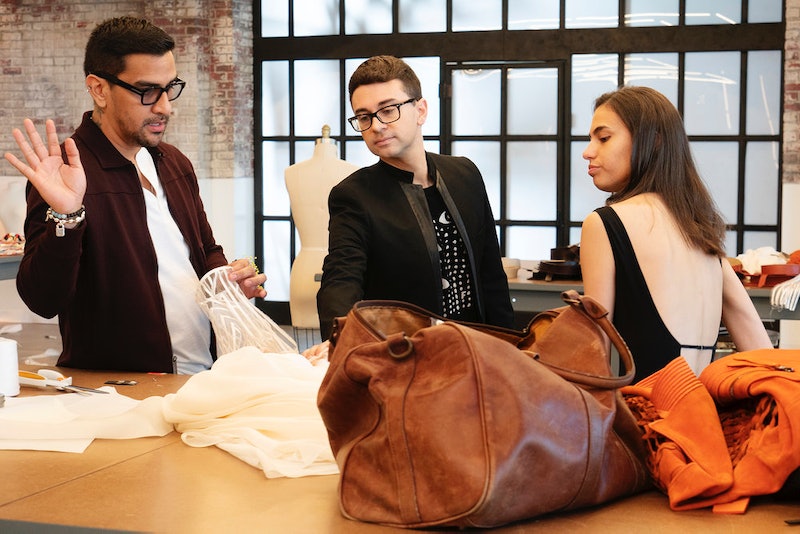 We might not have Tim Gunn's signature "make it work" catchphrase featured in this season of Project Runway, but some things haven't changed. Namely? The level of talent. The designers this season are as fierce as ever, and now that we're down to the finalists, the quality of clothes is impeccable. All the designers have their strengths, but let's focus on Sebastian for a second — we all want to wear his clothes, but can we? As it turns out, you can buy one of Sebastian's Project Runway looks, but right now, there's not exactly a huge selection.

The brand Nineteenth Amendment features some of the most successful Project Runway looks, one of which is a T-shirt designed by Sebastian that comes in a men's and women's version. At $45 for a pre-order, it's going to be a splurge for those of us not regularly donning luxury t-shirts, but if you're a big fan of the show and want a memento, it's probably worth the price. Plus, during pre-sale, $10 of every purchase goes to the Non-Profit Anti-Racism Coalition (NPARC), which is a wonderful cause to support.

Other than that, sadly, Sebastian's clothes aren't on display on Nineteenth Amendment's site — they only feature a select few looks hand-picked by the judges to receive such an honor. Sebastian also doesn't have a ready-to-wear line anywhere just yet, at least not that he's selling anywhere online. His website has a gallery section that he features some amazing looks on, and his Instagram feed flaunts his talent as well, but it doesn't appear that any of the garments are available for purchase just yet.

That doesn't mean you're out of luck if you're dying to walk down the street in more of your own Project Runway garb. Here are some of the other items from this season that Nineteenth Amendment offers in the same collection:

Jamall's gorgeous look won the entire shebang this week, and now you can pre-order your own version of it. It's not exactly what Jamall made — Nineteenth Amendment's site says the custom fabric pattern is "inspired by Jamall's fabric choice on Episode 7." But it still look basically the same, and can be shipped to you in 6 weeks. It's $198 before shipping.

If you were OBSESSED with the bomber jacket Bishme used in Episode 5 to pay homage to his roots, you're not alone. Nineteenth Amendment has a customizable version of it on their site, and you can customize it with your initials on the front and your hometown name on the back. It runs $400 per jacket, and customized ones are non-refundable, so make sure there are no typos. You can also snag the matching pants for another $175.

Tessa took home the very first prize of the season with this strappy apron top and wide-leg trousers. The top runs $125 while the bottoms ring in at $135. This is a style no one will be forgetting anytime soon.

If you're bummed about the lack of Sebastian looks for sale, you're not alone. But you likely won't have to wait long to get some of his styles in your closet — he's shined this season in a big way, and even if he doesn't take home the grand prize, there's no doubt in my mind that you'll see his name again.