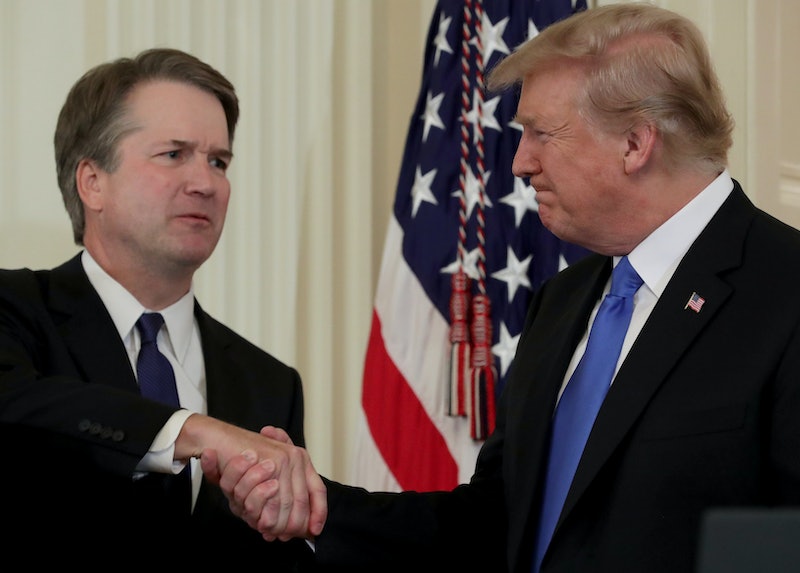 On Monday President Trump announced his newest nominee for the Supreme Court, which was immediately met with widespread disapproval from Democrats. If you're among those concerned about his nomination to the Supreme Court, calling Congress about Brett Kavanaugh is one of the most vital actions that you can take to make your voice heard in the confirmation process.

Realistically, Kavanaugh will ultimately make his way to the Supreme Court bench for several reasons. Among them is the fact that Republicans enjoy a slim, but solid, majority in the Senate right now. There are 51 Republicans in the chamber in total, and only 49 Democrats. Trump continued the tradition of presidents nominating a Supreme Court justice ideologically similar to themselves when he added Neil Gorsuch to the bench last year, so Republicans are widely expected to support Kavanaugh's appointment as well.

This isn't to say all hope is lost for those concerned about Kavanaugh's nomination. Republican Sens. Susan Collins and Lisa Murkowski are widely considered to be wildcards. Both of them are known to buck the Republican Party platform and follow their gut on key issues, as they did last summer when Republicans tried to do away with Obamacare. It's possible other Republican senators may not want to be totally aligned with the president right now, either.

All of this is to say that if you have concerns about Kavanaugh's appointment to the Supreme Court, you're going to have to contact Congress, because it's in their hands now. There are several ways to get your representatives to hear you out.

If You're Phone-Shy, Put Those Texting Fingers To Work

It's no secret that many young people shy away from making direct calls, and that's okay. The service ResistBot exists for just that reason. To use the bot, simply text the word "RESIST" to 50409. From there, ResistBot will help you find your senator and put together a message to send them. It's truly a solution designed for 2018.

Be Bold And Call Your Representative Directly

Save the number (202)-224-3121 in your phone right now. That's the direct line to the Congressional switchboard, and it's open all day, every day. The operator on the other end of the line will connect you to your senator's office, where you'll be able to speak to a staffer or leave a message.

You may consider letting your senator know, for example, that because of Kavanaugh's stance on abortion rights, you don't feel comfortable seeing them confirmed to the Supreme Court. It may not hurt to gently remind your senator that their job is to represent constituents' views and ask that they act accordingly.

If the switchboard idea doesn't appeal to you, there are several websites designed to do the work for you, such as www.callmycongress.com. All you need to do is navigate to the website, enter your zip code, and the website finds your congressional contact information for you. From there, all you have to do is call.

Opt For Snail Mail If That's More Your Style

While it's not a guarantee, it's totally possible that writing a good old-fashioned letter and popping it in the mail box could be just the thing that grabs an elected official's attention. If you need to find out where to send a letter, check the Senate's website.

If your senator doesn't run their Twitter account by themselves, it's definitely someone else's job to oversee its activity. Either way, those mentions are pretty much guaranteed to be monitored, possibly in real time. A light lift on your part is to look up your senators on Twitter and tell them publicly how you feel about Kavanaugh's nomination. Chances are that someone will get the message, and a little public pressure couldn't hurt.

The idea of reaching out to national politicians can sometimes feel a little awkward or overwhelming. The thing to keep in mind is that these people only hold elected office because of voters like you. Their job is literally to represent you in Washington. And while Kavanaugh's nomination to the Supreme Court will be difficult to block if Democrats choose to go that route, it's not altogether impossible. Crazier things have happened, and it's important to have your say in the political process, no matter what.