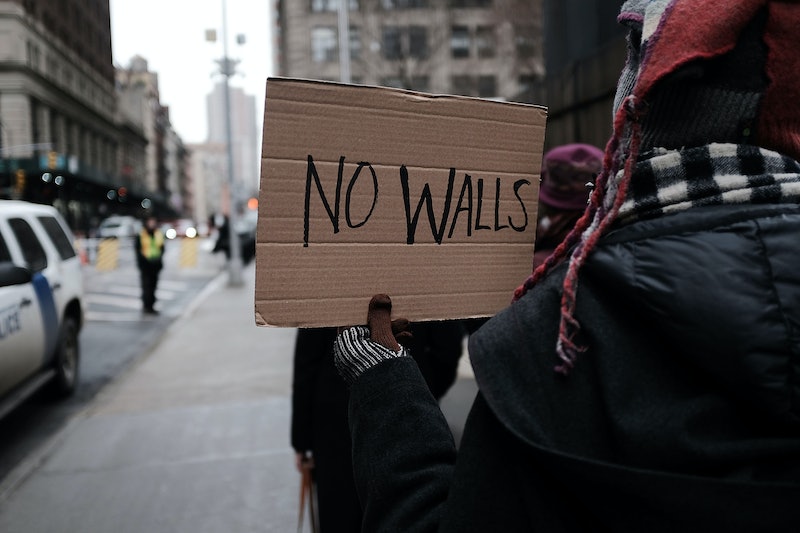 On Tuesday, POTUS threatened to shut down the government at the end of December if Democrats don't approve his funding request for the wall. As a result, it'll become increasingly important in the coming weeks to know how to call Congress about Trump's border wall if you oppose it. Since Republicans will lose control of the House in the new year, it's possible they'll try to push a bill through in the last minutes of 2018.

On Tuesday, Trump met Nancy Pelosi and Chuck Schumer in a televised conversation in the Oval Office with the goal of coming to terms on a budget agreement. It didn't exactly go as planned.

Instead, an on-camera shouting match between the parties unfolded, The Washington Post reports, during which Pelosi and Schumer repeatedly asked POTUS to take the conversation behind closed doors. In response, he insisted that he would force a government shutdown if Democrats didn't acquiesce to his request of funding for the wall.

Trump declared at one point (via The Washington Post), "I am proud to shut down the government for border security, Chuck. ... I will take the mantel, I will be the one to shut it down. I won’t blame you for it."

On Dec. 21, the government will shut down if a budget is not agreed upon. It's possible that Trump will work aggressively to force the hand of Democrats leading up to the shutdown in an attempt to secure his border wall funding. If this concerns you, the first thing you should do is find out who your representatives are in the House; the bill would have to go through the House before it reaches the Senate.

You can also reach out to your congressional representative via their social media accounts, if they're active on them. What's important is that you make your voice heard in the final days of 2018 so that your representative knows that their constituent is against the funding of several billion dollars to erect a wall on the U.S.-Mexico border.

If you're not sure how to talk to a congressional representative, YouLobby has a long list of talking points available for those who want to contest the border wall. These talking points include: that no congressperson who represents a district on the southwest border supports building a border wall, that the Mexican government has already confirmed it won't pay for the wall, and that building the wall could ultimately end up costing as much as $70 billion, as well as $150 million annually to maintain.

The site also has a series of suggestions for how to approach your call. For example, you can include a personal anecdote about how this issue affects your life. But YouLobby also reminds you that this should talk far less than five minutes in total, so don't worry about being on the phone for a long time.

If you check out YouLobby's sample script and talking points on the border wall, you should have more than enough inspiration to feel confident about speaking to your representative on the topic. And don't be afraid to call more than once, or to leave a message.