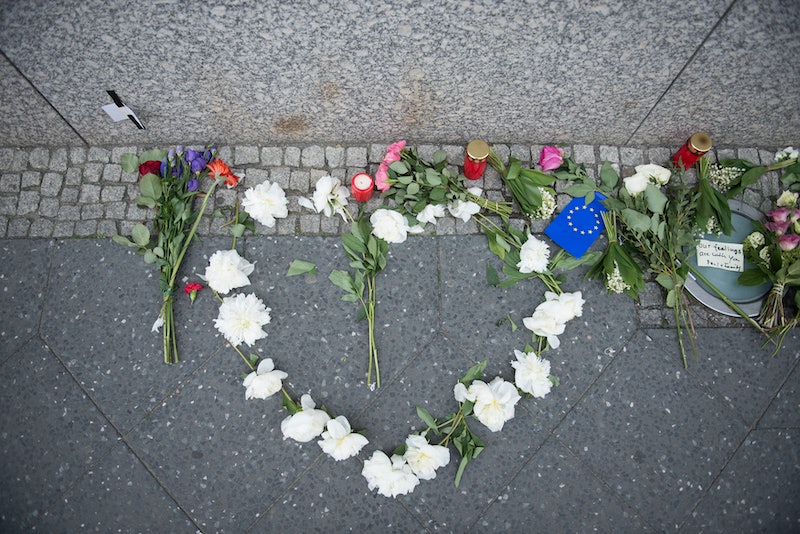 People from around the world have been following news on the terror attack at the Manchester Arena Ariana Grande concert, and they want to help. At least 22 concertgoers were killed and nearly 60 more were injured as the concert ended. Much remains unknown, but what is clear is that the world would like to help, including both those near Manchester and those far away. There are already several ways to donate to the Manchester Ariana Grande concert victims, and more will certainly spring up.

One of the first ways that people stepped up to the cause was by sharing memes and tweets with messages of solidarity. Some of the most moving included clips of Grande's performance, the skyline of Manchester at dawn, and a bee, the city's symbol, with the message, "Stay strong, our kid." Others shared images of the missing to try and help teens and kids reconnect with their families. Many of the survivors were stuck behind a police cordon and had to spend the night in hotels near the concert venue.

Here's how you can make a difference:

This was one of the first ways that people in the Manchester community responded to the attacks. Lines formed quickly at blood donation centers around Manchester Tuesday morning. That led the local blood donation group, Give Blood NHS, to declare that they had all the blood they needed for the time being.

But that doesn't mean you should give up an attempt to give, especially if you're O negative, one of the universal donors. Local authorities are encouraging people to make an appointment to donate later. "We are always keen to encourage new donors to register and existing donors to book an appointment. To do so, visit Blood.co.uk. If their site is down, try back later.

Give Your Concert Photos & Videos

If you were at the Ariana Grande concert, consider uploading your images and videos taken at the scene to the UK Police Image Appeal website. Basically this is a way for police to add to the video and images they already have through closed captioning and other means.

If you're not near enough to donate blood, one of the best ways to help would be to donate money to help the victims of the blast and their families. The funds are just now being started on crowdfunding sites like JustGiving. One such fund, organized by the Manchester Evening News has already raised its goal of 250,000 British pounds to 300,000 after the first one was met within a day. It will go to "support the families in the aftermath of the attack."

There are several GoFundMe campaigns for victims, as well as a general GoFundMe that will go to support all victims of the attack.

Another option to come will be to help specific victims of the attack. The first victim named, Georgina Callander, who was just 18 years old, was a huge Ariana Grande fan and was at college studying health and social care. In her honor, someone, started a fund that will help her family with burial costs, and to "allow them time off work to grieve." You can give now to Callander's family or choose to wait for another victim, or for an established charity to step in to help fundraise.

As time passes by, more funds will certainly be established, and existing charities may step into the space to help those affected. In the mean time, these are several great ways to donate more than just your thoughts or comments online. The victims and their families need your help, so consider giving what you can.