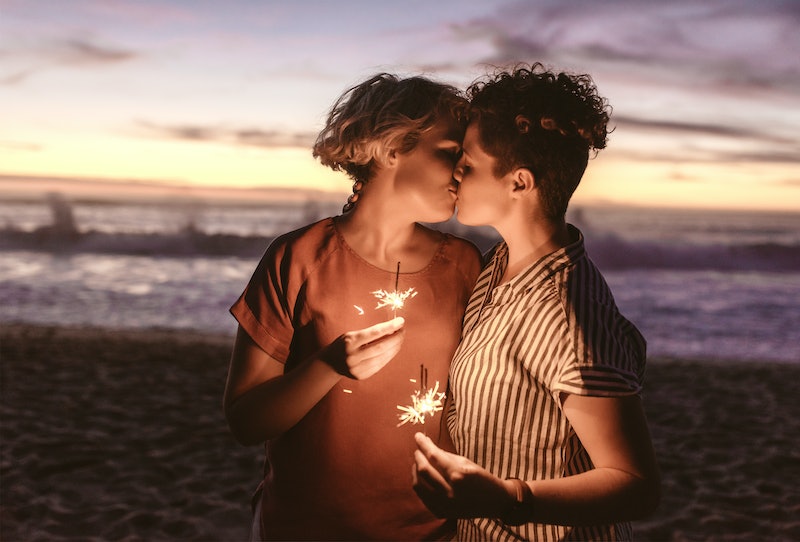 Figuring out what you want in romantic partnerships can be difficult, let alone actually finding it once you know. Even more challenging, at times, can be finding someone who meshes with your views on sex and sexuality. But if figuring out how to find a sex-positive partner is important to you, you can take a few extra steps when vetting potentials to better ensure what you get what you want and need from the get-go.

First of all, it's important to note, as Jamie J. LeClaire, a sex educator and writer whose work centers around the intersections of sexual health, body politics, queer, transgender, and gender non-conforming identity, tells Bustle, being sex-positive is not synonymous with being "up for anything" or "down for whatever." In fact, LeClaire says, you can be sex-positive and not even be interested in sex.

"Sex-positivity isn't about your own personal conceptualization of sexuality, but rather a perspective that acknowledges the range of sexual diversity among humans," LeClaire says.

Because this definition of sex positivity is often misconstrued or misunderstood, LeClaire says that even in their own experience there are a lot of people (particularly cis men) out there on dating apps with "sex-positive" on their profile, but they are actually not clear on what that term indicates.

"[When I see this on a profile, I get excited that] it's someone who is good at communicating about sex and establishing boundaries, only to be super disappointed when I find out it's just a term they recently heard on a podcast that makes them sound cool and into 'that stuff from 50 Shades of Grey,'" LeClaire says.

So, how can you be sure that someone is actually sex positive, and how can you communicate that yourself? Well, there are a few things you can do to be a little more confident that you and another person are on the same page.

"It's important to communicate more than just that you're 'sex-positive', since the term is vague," LeClaire says. "There are some things you can do to signal that you are a sex-positive potential partner or to look for in a profile." If you meet and are talking about it in person, these would be the topics you could bring up as well.

First of all, LeClaire says, mentioning that you value things like communication and boundaries is really important. And if you are looking for a certain type of dynamic — like dom and sub or you identify as a top or bottom — and you feel safe to communicate that on a dating profile or when you're talking, go for it! Indicating those things not only tells someone what you're into, but also that you're respectful, LeClaire says.

"Something else you can look out for in a profile is the term GGG," LeClaire says. "Coined by sex columnist and writer, Dan Savage, GGG —which stands for Good, Giving, & Game — is a term he uses to describe what to look for in an ideal sexual partner. He elaborates... 'think good in bed — which really means listen to your partner — giving of equal time, and game for anything, within reason.'"

Signaling your politics can also help signify you are sex-positive, LeClaire says. Mentioning the kinds of issues that are important to you can be a way to open a conversation about where you're coming from and it can lay the foundation for more in depth in future conversations.

"Folks will be a lot more inclined to read someone as [sex positive] if they express other views that align with sex-positivity, such as the decriminalization of sex work, gay and trans liberation, and body positivity," LeClaire says.

LeClaire says that there is also a new dating app called #Open, endorsed by many sex influencers and educators, which claims to be the inclusive, sex-positive, safer alternative to other apps. It might be a good place to start if online dating is your preferred method for meeting people.

"They make it easy for users to express their preferences, boundaries, and intentions so that they can find genuine and fulfilling relationships, however, that looks for them! They also have a zero-tolerance policy for hateful activities and harassment," LeClaire says.

But if connecting people in person is the way you want to approach things, that is totally cool, too. LeClaire says going to local sex shops for classes is one particular way to be in an environment where people are already involved in a sexual conversation. It can be a good place to connect with like-minded individuals.

Ultimately, communication is key! The more open you are with your needs and boundaries, the more possible it is to find what you are looking for. And remember, honoring your own pace is always the way to start.