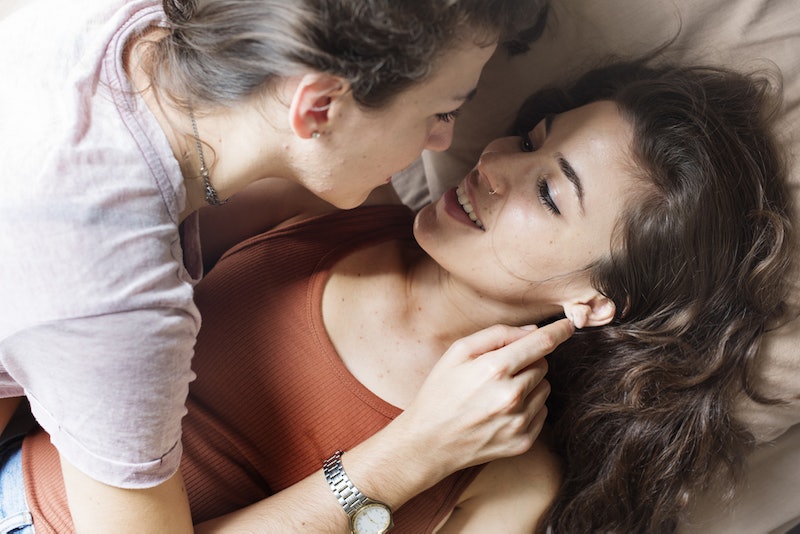 When it comes to being sex-positive, unlike the color of your eyes or hair, it's not an inherent trait. People do not fall from the womb being sex-positive; people become sex-positive. In a culture so hell-bent on turning a blind eye to open models of sexuality, to push your way through it all, find your voice, and embrace your sexuality without fear or shame isn't exactly easy. It takes a lot of guts to be a sex-positive person. But what does "sex-positive" really mean?

The term "sex-positive" is relatively new. According to a 2017 study published in The Canadian Journal of Human Sexuality, before 2008 the term “sex-positive” was barely searched online. Since then, as more people have used the word and it's made its way into the media, there’s been a big jump in how often it’s Googled. Still, the understanding of what it means to be sex-positive is a little bit more fluid than an express definition. What is known is that the concept came out of the sexual politics of the 1980s and ‘90s as feminists looked for a way to express their sexuality and have it been seen in a positive light. While being sex-positive isn’t as simple as just being pro-sex, it is a step in the right direction of understanding what it means.

"It's really important to clarify that sex-positive doesn't mean 'likes sex and feels good about it' — that is GREAT, of course," Dr. Carol Queen, Good Vibrations staff sexologist, curator of the Antique Vibrator Museum, and author (with Shar Rednour) of The Sex & Pleasure Book: Good Vibrations Guide to Great Sex for Everyone, tells Bustle. "But to understand what it means, think of the opposite term: sex-negative. This clarifies why the original definition is focused on making space for consensual diversity, including access to education, support, health care, and anything else a person would need for their sexuality not to be a source of systematic problems born of shame and other peoples' negative attitudes."

As Dr. Queen explains, at the core of sex-negative thinking is the idea that the only "right" or "normal" view of sex is one that is extremely narrow, one that dismisses anything outside of that view as negative. There is no "right" way to have sex, be sexual, or define yourself in sexual terms. But since one has to become sex-positive — or rather, realize that they perhaps always were — each person's process for understanding that will be very different.

But it wasn't until college when Vitale truly embraced and understood not just what it means to be sex-positive, but her own sex-positivity.

"My sorority, Kappa Zeta Psi, was full of empowered, sex-positive women," Vitale says. "It wasn't long before I was invited to my first Pure Romance party, where the brand of female empowerment, education, and sex positivity awoke something in me. From there, I was buying whips, sex toys, lubes, and enhancement creams to find the highest levels of pleasure."

"To be sex-positive means to recognize that sex and sexuality are normal and healthy, and to understand just how vital education around these topics is in order for them to actually be seen that way," Ash Spivak, co-founder of Allbodies, tells Bustle. "It means not expecting sex or sexuality to look one specific way and remaining open, without shaming, to others when their way looks different than yours."

“Sex-positive can mean a wide variety of things to different people,” Alexandra Fine, CEO of Dame Products, tells Bustle. “To me, it means believing that sex has intrinsic value in the world. I don't think you can be more sex-positive, just like you can't be more of a feminist than someone else. It's not a hierarchy. I think individuals who honor their physical desire to be intimate have a clearer mind-body connection and live more joyful lives. Then we will all be happier.”

While Vitale may have realized earlier than some that she was sex-positive, even if she didn't know the terminology for it, others came to it later in life. "I started following sex-positive writers and Wildflower Sex," Kiley, 30, tells Bustle. "Reading articles made me realize that what I love about sex, what I crave, and how I communicate my wants, needs, and pleasures is acceptable! I shouldn't suppress my sexual urges and desires regardless of societal expectations or suppression."

Ultimately, becoming sex-positive means letting go of what society says sex is or even "should" be.

Anyone, if given the proper resources, can become sex-positive. Or, even if they're not given the resources, if they look at themselves and evaluate their belief system and convictions, realizing what the term means to them in regards to expression, then that's moving toward it.

"Someone can be more sex positive by examining their beliefs," Lauren Billie, co-founder of Allbodies, tells Bustle. "Go deep. Ask why they have those beliefs, where they came from, if those beliefs are good for their life... then reframe what you want to believe. Write it down. Make it a positive sexual ideal of how you want to show up with your body, a partner's body, and in culture. Use that as a filter for how to redesign your relationship to sex."

Ultimately, becoming sex-positive means letting go of what society says sex is or even "should" be. It's about unpacking the confounds that our culture throws our way in regards to sex and sexuality, accepting it on a more profound level that is all-inclusive and completely void of judgment. "Sex-positive isn't just a personal philosophy or personal view — it's sociocultural," Dr. Queen says.

Human sexuality isn't black or white; even when we choose to label ourselves, very few people can only check off only one box in a long list of options. This is a beautiful thing. Becoming sex-positive can get us there.

More like this
The 19 Best Tweets & Memes About Bisexual Awareness Week
By Lexi Inks
These 4 Signs Are The Seductive Sirens Of The Zodiac
By Brittany Beringer
Are Quality Time & Gift-Receiving Love Languages Compatible?
By Lexi Inks
Breeding Kinks Have Been On The Rise Since Roe V. Wade Got Overturned
By Lexi Inks
Get Even More From Bustle — Sign Up For The Newsletter