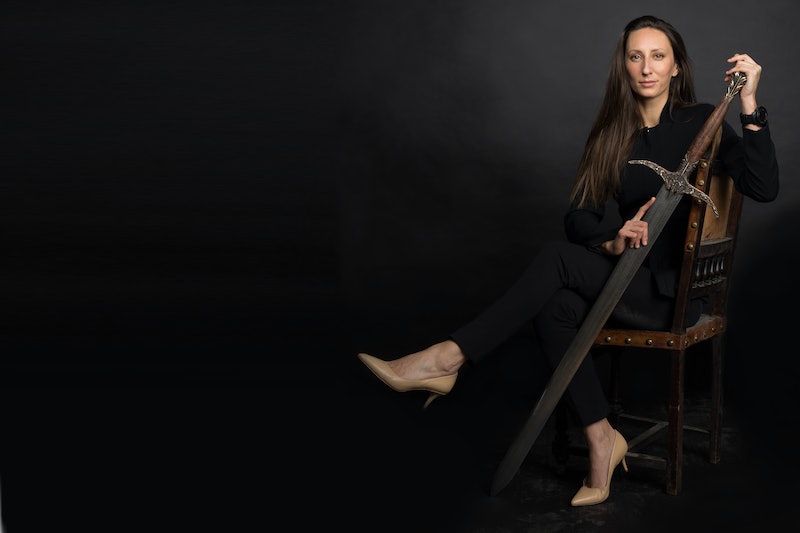 Game of Thrones fans are still in the middle of a waiting period as unpredictable as the weather in Westeros, and are gathering as many clues as possible before the show returns for its eighth and final season. As the biggest wars ever loom, the weapons themselves deserve a closer look. Game of Thrones weapons specialist Natalia Lee is the world's only female film armorist, and she's spent eight years working on the HBO series. She spoke to Bustle about how she forges some of GoT's most deadly and iconic weapons, and whether she knows the secrets to how her creations will be used in Season 8.

Of course, Lee is pretty coy about how her weapons will factor into the show's future. Even telling fans which weapon to keep an eye on in their umpteenth rewatch would be revealing too much. Lee would know — through her time on the show, she's watched as the most minor characters and weapons became majorly important in later seasons. One of the weapons she designed is Heartsbane, a Valerian steel blade that became a key plot point in Season 6, and is the subject of many of theories about who will wield it in Season 8.

But I'm determined to find out some secrets about Game of Thrones' weapons. Can fans go back and look for weapon-related clues? "I just feel we know the characters that are still around and we know that a few things have exchanged hands and been honored to other people," Lee tells Bustle.

Season 7 proved the importance of a weapon's exchange of hands with the dagger that finally ended Littlefinger. An exchange of hands can foreshadow a change in loyalty, and that's especially important when discussing weapons made of Valerian steel, as it's one of only two materials in existence that can kill White Walkers and is thus key to survival. But who will defeat the army of White Walkers, if anyone, depends on who has the weapons capable of doing so, and many of them have a complicated history. For example, Jeor Mormont's sword Longclaw was gifted to Jon Snow — though it could be rightfully wielded by Jorah or Lyanna Mormont, so there's potential for conflict in the final season there. Ned Stark's Ice was split in two; one half is now in the hands of Jaime Lannister, and the other is with Brienne of Tarth. The two of them are currently on opposing sides, but are metaphorically bonded together by their weapons.

So, if you're the kind of fan that's super into list-making, this is the list to make. Which weapons are left, where are they now, and who has them?

Lee's department doesn't always know when they first start designing a weapon what its importance will be down the road. "It always starts with the script and a summary of what's going to happen," Lee says. "We get a fair idea. The script will sometimes change. We have influence from the writers. They may be very specific in what they want. We may reference back to the novels." Oftentimes, they're looking to reflect the story in the details of the weapons themselves. "Especially in the sense of Heartsbane," Lee says, "[we're] always trying to bring it back to the script. The actual sigils used, and design elements, and trying to tell a story. The House of Tarly is an arching family, hunting family, so we wanted to incorporate that into the hilt."

The amount of specificity versus freedom for creativity in her department varies from weapon to weapon, she says, and "there's definitely a few swords and a few principal weapons that we make every year that we hope will become legendary or plotlines themselves, and they kind of do. They take on a life of their own."

Lee has been with Game of Thrones since its first season, and she's had the chance to do even more than design weapons. "In the first [season] they asked me to play a character who chopped ears off called Chella. Sort of a grizzly tribal leader," she says. "In Season 5, they asked me to stunt double for an actress in the Sand Snakes, one who had a bronze handle cast snake whip," Lee says. It helps that as the designer of the weapons, she's an expert in how to properly wield them. "Sometimes the stunt actors might need help from us to learn — they might not know how to use a catapult."

It's an undeniably fascinating and exciting job, and one that you might not have known even existed. So many women don't realize that being a weapons specialist is "a job chicks can do," Lee says. "If a guy can do it," she adds, "a girl can do it much better." While Lee is the only female weapons specialist around, she's not the only woman on set behind the scenes. There are a lot more ladies running things behind the scenes on GoT than you may realize, which is totally fitting for a fictional world that is slowly but surely being dominated by the badass women of Westeros.

"On a film set we might have a [director of photography] that's a female," she says. "We might have a director. My stunt friends are females. The head of horse wrangling doing the major horse stunts is female. Yeah, there's like so many chicks doing their thing on film sets. Sometimes we rule the set. It's kinda nice."

That doesn't mean Lee doesn't surprise people when she shows up to work, unfortunately. There are still some assumptions in this male-dominated industry. One time, while traveling to set with an older man, she says, a production manager introduced himself, saying that the man next to her "must be the armorer" and that she "must be the drapery person."

"I was like, 'Negative," Lee laughs. "I've never made drapes in my life! He was so apologetic, but yeah, there are misconceptions." It helps that when she does show up to work, she's literally armed. "Sometimes you're like a big novelty [on set]," she says, "but they get used to you quite quickly. You're the one with the weapons and they kind of have to toe the line and [listen] because there's no one else, is there?"

As for what the mood has been like working on Season 8, "I think at this point we're all super exhausted," she says. "It feels like we've been through everything. I think we've killed like nearly everybody." Which — don't be alarmed — is basically what all the cast and showrunners have been saying. Better to just assume everyone dies than risk giving anything away, right? Read into that what you will.

Game of Thrones' weapons are sometimes as important as the characters they are harming and protecting. In the final season, with so much to pay off, Lee's incredible work will surely continue to shine through.