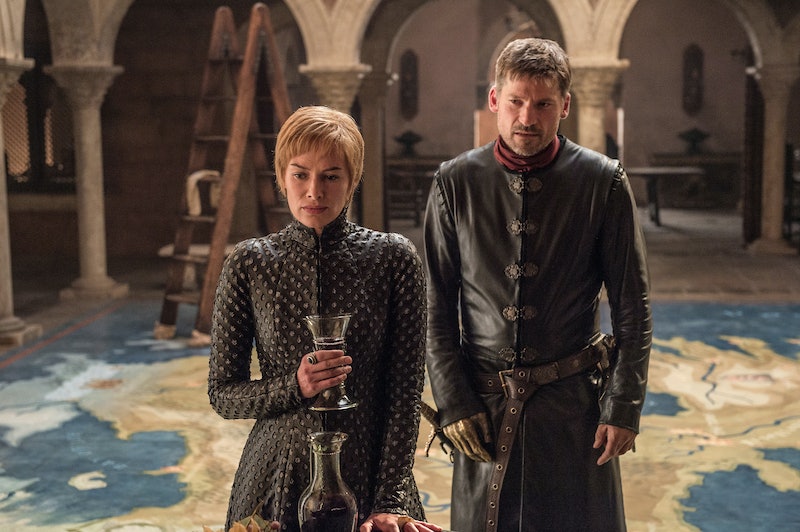 You better get ready because the final season of Game Of Thrones is going to be a bloody mess. As if there was any doubt that Season 8 was going to be deadly, an HBO exec just seemed to confirm everyone's worst fears. Basically, everyone is going to die in Game of Thrones' final season.Variety reported that, while at a panel called “The Best of HBO” at the Innovative TV or INTV Conference in Israel, Francesca Orsi, HBO's SVP of drama, teased that fans would need a whole lot of tissues to get through the final run. After all, the cast needed them when they got together for the upcoming season's table-read.

“None of the cast had received the scripts prior," Orsi explained, "and one by one they started falling down to their deaths." She said “it was amazing" to have the entire cast find out how Game Of Thrones ends while sitting together in one room. "By the very end," she said, "everyone looked down and looked up and tears were in their eyes.”

While the cast may have been sad, they also seemed impressed by the season. Orsi said that, when it was all said and done, everyone stood up and applauded for close to 20 minutes.

While it might be hard to hear that many, if not most, of your favorite Game Of Thrones characters aren't making it out of this winter alive, it's probably not that surprising. The HBO series has never been afraid to kill off a beloved character, which became clear when they decapitated presumed protagonist Ned Stark in the first season.

The question of who will survive Game Of Thrones has been on everyone's mind since the Season 7 finale, in which the Night King stormed The Wall. Already, some are searching for clues that Tormund survived Viserion's attack, and it's hard to believe all three of Daenerys' dragons aren't going to lose their lives in the battle for the Seven Kingdoms.

If you believe the rumors, Dany and Jon Snow might become Azor Ahai, meaning they'll have to die so they can be resurrected. And, if you trust Maggy the Frog's prophecy, Cersei won't be making it through the finale — if she even manages to get that far.

The fact that The Wall has fallen also means your favorite characters will be tested in Season 8. John Bradley, who plays Samwell Tarley, told TV Guide, "Each of the characters this year is placed in a completely alien environment at some point in the season that they've never been placed in before." That sounds like a recipe for disaster.

While, in the past, most Game Of Thrones theories were about guessing who was going to die, this time around, fans might want to start guessing who will make it out alive. Especially since HBO has already signed up for potential GOT spin-offs, a sign that not everyone could possibly be dead at the end of Season 8.

It's not just one spin-off that HBO wants, even; it's up to five. “It feels like corporate malfeasance to not continue it,” Orsi said at the INTV conference. “That’s why it spawned three, four, five spin-offs." As she said, HBO's "going big" and hoping it'll pay off with fans.

Not much is known about the spin-offs as of yet, which is probably a good thing since knowing who's starring in these shows might give away too much about the final season. At least, though, it gives fans a chance to look on the bright side of things. A lot of characters might lose their lives in the upcoming White Walker battle, but fans will ultimately win the war when others return for these spin-offs.