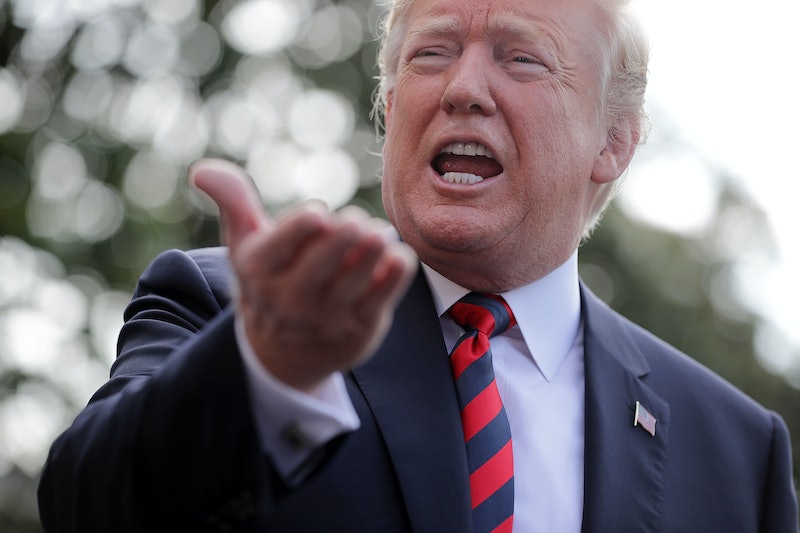 If you've ever wondered how to get a job in Trump's White House, wonder no more. After reportedly suffering a mass exodus of staffers, the White House is trying to recruit new employees for the federal government by distributing flyers at an upcoming job fair, Politico reported Thursday, to will be hosted by the Conservative Partnership Institute (CPI). Bustle has reached out to the White House for comment on the reports.

"Interested in a job at the White House, Defense, Interior, Commerce, Homeland Security, Health & Human Services, NASA, Energy, Treasury or other executive agencies?," a copy of the flier obtained by Politico reads. "CPI seeks to get the best, most qualified conservatives up in front of the administration and we need your help to do so. There are positions currently open and we are looking for the most competent conservatives to recommend."

The CPI was founded by former Republican senator Jim DeMint, and is dedicated to "providing a platform for citizen leaders, the conservative movement, Members of Congress, congressional staff and scholars to be connected," according to its website. The Executive Branch Job Fair, where the fliers will be distributed, takes place Friday in the Dirksen Senate Office Building, according to the flier.

As of February, Trump's White House had a 34 percent turnover rate, according to the New York Times. The Times reported in June that there's expected to be a mass exodus of staffers after the midterm elections, as a mood of "numbness and resignation" has reportedly set in among White House employees.

The latest officials rumored to be eyeing the exits are Press Secretary Sarah Huckabee Sanders andt Chief of Staff John Kelly. CBS reported Wednesday that Sanders, who replaced Spicer in July, is planning to leave the White House by the end of the year; on Twitter, Sanders criticized CBS for publishing the report but did not deny its contents. The Times reported in June that Kelly told senators that the White House is "a miserable place to work," although it's worth noting that reports of Kelly's supposedly-imminent departure have been relatively common since he took the job.

Even with all of the staff exits, it's unusual for a White House to recruit employees at a jobs fair. A former Obama administration official told Politico that this would have been unthinkable during Barack Obama's presidency, in which West Wing Jobs were often not even listed at USAJobs.gov, the official hub for those looking to work in the federal government. But Politico also reports that recent departures and firings from the White House have "hollowed out the ranks of lower-level staffers," and that it has had a difficult time filling those positions.

In addition to staffing problems in the White House, President Trump has reportedly been having a hard time finding lawyers who are willing to represent him, with various news agencies reporting in March that at least seven lawyers or law firms had rejected Trump's requests to hire them. Two of the president's top attorneys, John Dowd and Ty Cobb, have already quit, while his personal lawyer Michael Cohen had his office raided by the FBI in April and is reportedly about to be arrested.