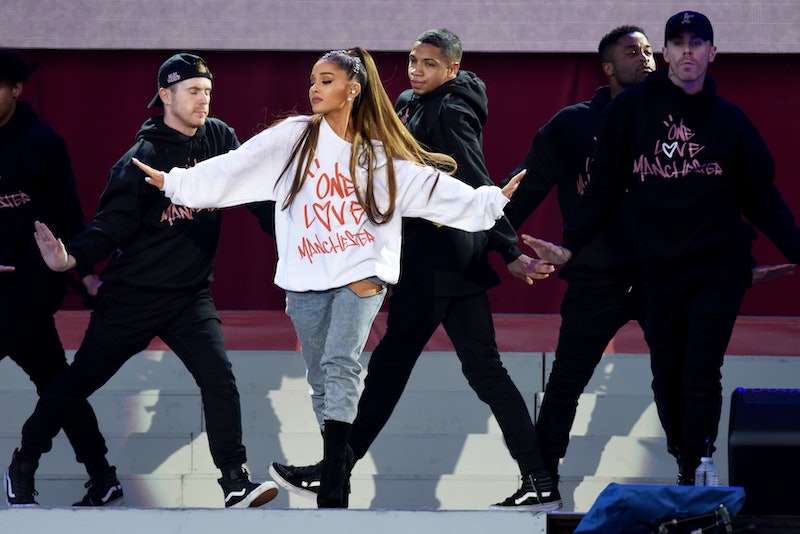 It's just been announced that Ariana Grande will be headlining Manchester Pride in 2019, and that's symbolic for so many reasons. The will be Grande's first gig in Manchester after her One Love Manchester concert, which was organised in remembrance of the terrorist attack of May 2017. It shows her commitment to the city, and the hurt they jointly share. Her music is a force of resilience, which has been so needed in recent times, and if you need a bit of that strength too, here's how to get tickets to Ariana Grande's Manchester Pride gig.

It's been a very emotional 24 hours for the UK. Yesterday, the country woke up to the news that their national treasure, Olivia Colman had won an Oscar, and later came the news that one of the UK's favourite international treasures would be coming back to party. Capital FM reported that the thank u, next singer was in talks to headline Manchester Pride on Dec. 28, 2018.

Grande also hinted at her headlining slot 10 days prior to that report when she tweeted: "#sweetenerworldtour excited to spend march to october w y'all next year. tickets available now minus one last special uk date… when am i seeing u ?" So, now you know.

Manchester Evening News let the cat out of the bag on Monday, Feb. 25, as they reported: "She had said she'd be back for a special show and now it's confirmed Ariana Grande will headline the Sunday of Manchester Pride 2019." Alongside Grande, Manchester Pride will see the likes of Years and Years, Bananarama, and Pixie Lott taking to the stage in their new location of Mayfield Depot. You can get tickets at TicketMaster, either for the whole weekend or for individual days, with full weekender prices starting at £70.95.

The organisers came under a bit of flack for that relatively high ticket price when it was first released, with one Guardian writer suggesting "charging £71 for people to celebrate their being free is just, well, rich," on Feb. 4. But Grande's appearance now makes the price seem a tad more reasonable.

As the BBC reported on Jul. 13, 2017, Grande was made an honorary citizen of Manchester after she returned to the city to host an epic night of music, which also featured performances from the likes of Coldplay and Oasis, in tribute to the victims who lost their lives at the Manchester Arena Bombing earlier that year.

Manchester City Council leader Sir Richard Leese told the BBC that it would have been understandable if she hadn't returned, "But no - instead she, as an artist, a performer, was determined that she would not perform again until she had returned to Manchester to perform." Which is exactly why she was made an honorary citizen.

The honorary Mancunian hasn't stopped spreading her love to the city, and I can't wait to see her bringing joy to Manchester now that there's no tears left to cry. In this case, it's all pride.