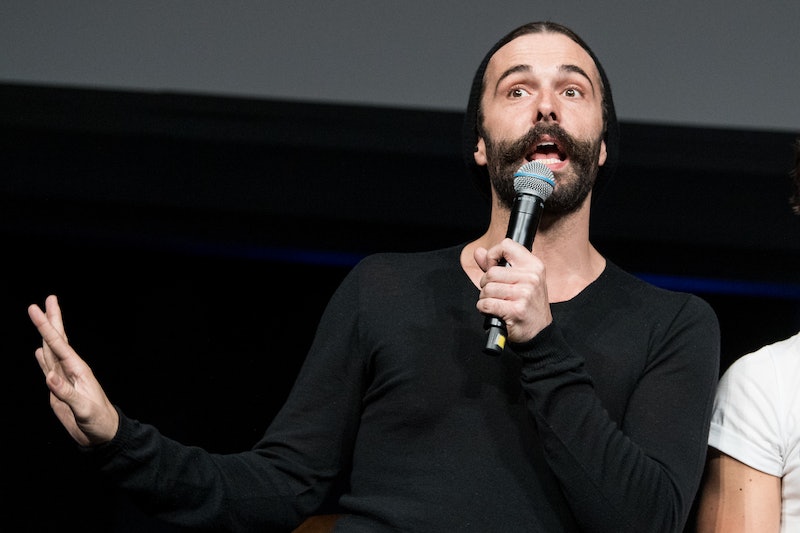 Queer Eye star Jonathan Van Ness is bringing his stand-up comedy tour to the UK, can you believe? The Road To Beijing tour will see the fabulous hairstylist and grooming expert make his comedic debut at a variety of locations across the country, and fans of Netflix's hit makeover series are no doubt scrambling to see one of the Fab Five in the flesh. So if you're one of them, here's how to get tickets for Jonathan Van Ness' tour.

Tickets to the Road To Beijing tour are available to purchase on Live Nation, and according to the website the stand-up tour's UK leg will get going at Dublin's Olympia Theatre on October 16, before moving to Manchester's 02 Apollo on Thursday, October 17. Van Ness will then bring his show to the capital, and perform in London at the Eventim Apollo the following night. And on Saturday, October 19, he'll be holding court at the King's Theatre in Glasgow.

In addition to starring in Netflix's Queer Eye, which recently announced its third season, Van Ness also hosts the Emmy-nominated series Gay of Thrones, as well as his very own podcast, Getting Curious. However, many Van Ness stans out there can't wait to see the loveable character return to his role within the infamous Fab Five — and they're in luck, because Queer Eye Series 3 is on its way.

The hit Netflix series will premiere next week on Friday March 15. The exciting announcement was made via the official Queer Eye Instagram account, and the trailer for the upcoming third series was subsequently released. And fans can breathe a sigh of relief, because each fabulous member of the Fab Five, including Karamo Brown, Van Ness, Antoni Porowski and Tan France, are returning to the makeover phenomenon. Not too much has been given away about the new season, however France did previously reveal that viewers can look forward to Queer Eye's first ever lesbian hero. As reported by the Radio Times, he said: "We have our first lesbian on the show this year and she’s formidable. What we do with her, you’re going to love it."

In an interview with E! News, Porowski also explained that this season would focus heavily on the themes of "inclusivity and diversity." He said: "Inclusivity and diversity continues to be the focus of our MO, of what we’re out there to do. I think people are going to se a lot of differences in Kansas City, but they’re going to see maybe more and understand a little more clearly that we are all the same, our struggles are the same, to show up for our families, to be better lovers, friends, parents children, like these are all human experiences. It doesn’t matter which coast or which country you’re in, it’s all something you can relate to."

The show's resident chef went onto explain how he struggled with his emotions throughout filming. In the interview, he revealed "Before the season started, I actually had a conversation with myself where I was like, don’t cry as much as you did in the first season, and like, try to make things that are a little more complicated. But what I ended up telling myself was like, just continue to be vulnerable, let it happen when it happens organically, just be yourself because that’s why you’re here…so I cry a lot."

Queer Eye Series 3 is available to stream on Netflix on Friday, March 15.