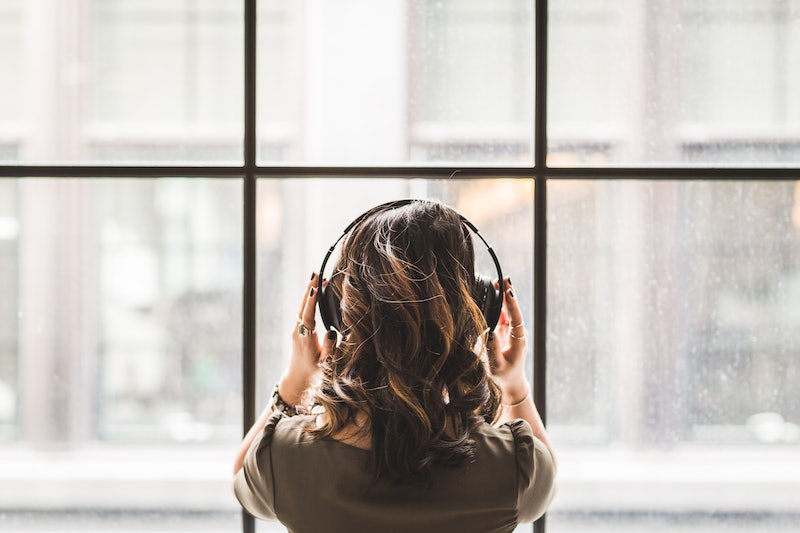 If we're being honest, a lot of crap-tastic things happened in 2017; at the same time, a lot of brilliant things happened, too — like your Spotify playlist. Want to gather together your favorite jams of the year? If you're wondering how to get your top Spotify playlist, it's easy. All you have to do is sync your Spotify with Your 2017 Wrapped by going to the page and logging into your account, and they'll show you all the tunes you experienced and fell in love with over the course of the year.

Wrapped is an annual feature offered by Spotify, and it replaced last year's Year in Music feature. It tells you what you streamed this year, the amount of time you spent streaming music, and how many songs, genres, and artists you've listened too. Next, you get to take a quiz to see if you really know your own listening habits, before ultimately learning which songs you listened to on repeat, with a list of your 100 favorites. You even have the option to share your favs via social media, if you don't mind everyone knowing you binged on Justin Bieber and Disney tunes all year long. No judgment.

As an added bonus, Spotify will also give you a list called "Ones That Got Away," where they'll reveal songs they'll think you love that you missed, giving you even more opportunity to discover something new and amazing. Hooray — something to look forward to in 2018!

The yearly appearance of Wrapped also means something else. Spotify revealed its Year in Music lists, announcing everyone's favorite redhead, Ed Sheeran, as Spotify's most streamed artist in the world for the year, with 47 million listeners, 3.1 billion plays of his latest album, Divide, and 1.4 billion streams of "Shape of You." For the ladies, Rihanna was the most popular of the year (obviously). And after Rihanna came... nobody else, because who cares?

Just kidding. Drake, Coldplay, and Taylor Swift with her many angry break-up songs were not far behind. Spotify has also added the most streamed tracks, best artists overall, top groups, and best Latin artists and songs; so you have plenty of new material to sift through and diversify your playlists moving forward.

Spotify isn't the only one looking at the best of the best of 2017. Esquire also took a stab at it, naming Kendrick Lamar's "Fear" as the best song of the year, with appearances by Selena Gomez (for "Bad Liar") and Lana Del Rey ("Love") later on down the list. Side note: remember when only little kids listened to Selena Gomez? Even I'm obsessed with her now. NO SHAME.

Rolling Stone also had its own list, including none other than Carly Rae Jepsen ("Cut to the Feeling") and the record-breaking "Despacito." In related news, Carly Rae Jepsen has new songs out since "Call Me Maybe." Who knew?

Maybe 2017 wasn't all rainbows and butterflies. We've been through a lot, and we deserve a cookie or something. But we did have a few bright moments this year, like adorable baby names, mind-blowing ketchup hacks, poop-themed everything, and gold Hershey bars. Now we can add to that the many brilliant melodies that filled our minds this year. Before 2017 comes to an end and we ring in 2018, take a look at the highlights of your Spotify list this year and jam out with your bad self — Justin Bieber and all. Rock on.