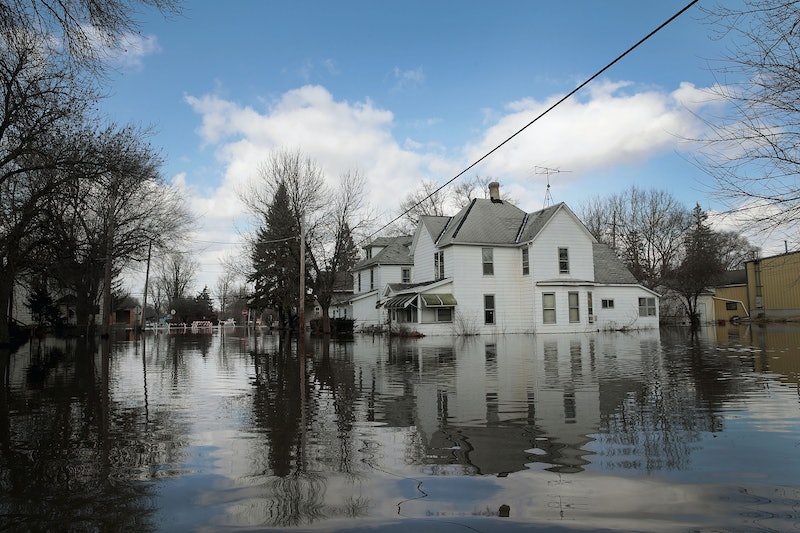 In the aftermath of a winter storm known as a "bomb cycle" that crossed the central United States, thousands of homes were damaged this week as multiple states declared a state of emergency. If you have any resources to spare, there are a few ways you can help Midwest flooding victims.

The storm began last week and was labeled a bomb cycle because it involved a massive, quick pressure drop that caused unusually high winds for this time of year. Some places experienced blizzard conditions, but the worst came later: As the weather warmed, many regions were hit with heavy rain, which melted the preexisting snow on the ground and led to disastrous flooding across multiple states.

The rushing water has already killed four people, displaced thousands from their homes, and destroyed dams and bridges, according to The Washington Post. Nebraska and Iowa have received some of the worst damage, but flooding has also harming Wisconsin, Kansas, Missouri, South Dakota, Illinois, and other places. Snowmelt is causing the banks of rivers like the Missouri, Elkhorn, and Platte to overflow. Parts of the Mississippi River are also expecting some flooding.

"Major to historic and catastrophic flooding will continue across parts of the Missouri and Mississippi River Basins due to rapid snowmelt as a result of heavy rainfall last week," the National Weather Service announced on Tuesday.

Where To Donate Money

The American Red Cross is taking donations to help fund its relief efforts in the region. The organization announced on Monday that it had deployed volunteers across seven states, and that nearly 600 victims spent the night in Red Cross shelters on Sunday after being displaced from their homes. (If you need one, you can look up a shelter here).

The group is also providing food and other relief. To donate, visit the Red Cross website (you can specifically target its Nebraska and Southwest Iowa branch) or call 1-800-RED CROSS. If you text "REDCROSS" to 90999, a bot will walk you through the steps of making a $10 donation.

Other organizations are also taking donations, including United Way of the Midlands (which offers you the option of choosing which community to send money to), The Salvation Army, Convoy of Hope, and The Nebraska Farm Bureau Disaster Relief Fund. The latter prioritizes rural and agricultural communities; according to The Washington Post, the storm is expected to destroy at least $800 million worth of crops and livestock in Nebraska.

Where To Donate Goods

If you live in Omaha, the Salvation Army needs clean-up supplies such as disinfectant, shovels, masks, and tarps, according to the Omaha World-Herald. It's also accepting donations of bottled water. You can donate nonperishable food to the Family Fare grocery store in Blair, which has taken up collections for victims.

First responders could also use assistance: Both Joseph's Coat Ministries and the Community of Christ Church are taking donations of towels, blankets, bottled water, adult socks, and packaged snacks for them, according to the Herald.

If you have hay, fencing, or feed stuffs to donate, you can do so through the Nebraska Department of Agriculture, per PBS.

People in northwestern Iowa can donate food to the The Food Bank of Siouxland, which PBS reports is making deliveries to victims.

The Nebraska Department of Agriculture is looking for volunteers, according to PBS, and you can call 1-800-831-0550 to sign up. The Salvation Army also needs help: Go to registertoring.com, enter the name of a nearby community affected by the flooding, and choose the option "Flood Relief 2019 Volunteering" under the "location" category.

Nebraska Volunteer Organizations Active in Disaster and United Way are partnering to help with cleanup efforts, a liaison for the former group tells Bustle. To volunteer, call 211. To request help, call 833-556-2476.

Many people across the Midwest have experienced the worst flooding they've seen in their lifetimes. Nebraska Gov. Pete Ricketts said Monday that the area had been hit by "the most extensive damage our state has ever experienced."