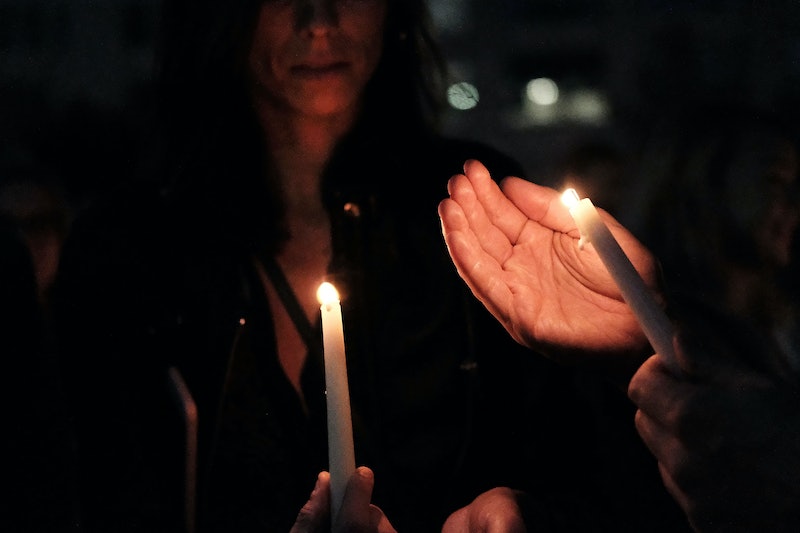 What should have been an afternoon of light-hearted celebration for a group of friends in upstate New York turned deadly when a stretch limousine sped through an intersection and lost control on Saturday, The New York Times reported. The limo plowed by a store with customers outside and into an empty car, killing all 18 of its occupants, the driver, and two pedestrians. For those who want to know how to help the New York limo crash victims and their families, there are a few ways you can lend a hand.

The group had been on their way to an upstate New York brewery, according to The New York Times. The driver of the SUV limo had been speeding downhill toward an intersection of two highways that was notoriously dangerous in the town of Schoharie. According to CBS 6 in Albany, the driver blew past the stop sign. Everyone killed in the crash was an adult, The Times reported, and among the victims were four sisters, two brothers, and at least two pairs of newlyweds. Some were parents of young children. The National Transportation Safety Board on Sunday said the crash was the "deadliest transportation-related accident" in the nation since 2009, The Hill noted.

“That limo was coming down that hill probably over 60 miles per hour,” said Jessica Kirby, 36, the manager of the Apple Barrel Country Store, where she said people were hit near the parking lot. “I don’t want to describe the scene,” she added. “It’s not something I want to think about.”

The store is now asking for donations for the town's local volunteer emergency services. The post called the first responders "the heroes of our small community."

On Sunday, a GoFundMe page was made for the daughters of two of the victims, Adam and Abby. According to the page, written by the organizer Sarah Maltzman, who has identified herself as a friend of Adam’s mother, the young daughters are 4 years and 16 months old, respectively. "Adam and Abby were amazing parents to these girls and taken much too soon," the page reads. "While families will step in and provide loving care for these girls, there will be expenses that we can help with during this time when we otherwise feel so helpless."

Another GoFundMe page was set up for two brothers who were killed in the crash. As The New York Times reported, the brothers were Rich Steenburg, 34 and Axel Steenburg, 29. Axel's wife, Amy, was also in the limo and died in the crash. She had been celebrating her 30th birthday. The pair had married over the summer and were the ones who had rented the limo for the birthday celebration. Rich's wife had not been feeling well on the day of the accident and stayed behind. Rich leaves behind two kids, a 10-year-old daughter and a 14-year-old stepson, The Times wrote.

On the brothers' GoFundMe page, the organizer Andrea Hojohn Orokos, who did not identify her relationship to the brothers, wrote, "Rich, Axel and other friends and family passed in an unfortunate party bus accident. It is beyond devastating for everyone who knew them all. Please help ease the burden during this time and help donate to funeral expenses."

If you're in the Schoharie area and would like to show your support, a local anchorwoman has noted that a vigil is scheduled to honor the victims on Tuesday at 6 p.m. ET.