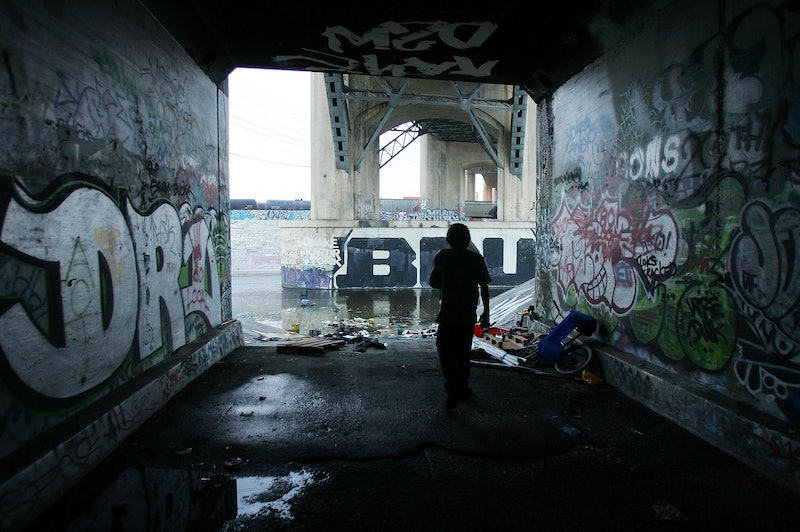 Tropical depression Harvey first formed in the Caribbean, but slowly dissipated due to less-than-ideal environmental conditions. It redeveloped in the Gulf of Mexico, however, and is expected to make landfall along the Texas coast as a hurricane by the weekend. Regions impacted by Harvey — including Texas and Louisiana — are preparing for severe rainfall and flash flooding. The most heavily impacted areas could see up to 20 inches of rain, though the projected average is currently 10 to 15 inches. There are also efforts in some cities to help the homeless during tropical storm Harvey, and there are lots of ways you can help.

The most immediate step you can take is to look up local homeless shelters in cities that will be affected by the storm, such as Houston, San Antonio, Corpus Christi, and New Orleans. If they accept donations or care packages, you should be able to get in contact with them to send necessary supplies.

There are also broader efforts to help the homeless in affected regions. In Corpus Christi, for example, the Salvation Army is currently taking donations and receiving much-needed supplies to assist the homeless and other people in need. Yamid Duarte, a spokeswoman for the local Salvation Army told the Caller-Times that other Salvation Army branches were on standby across Texas, ready to help if needed.

I Am Waters is a nonprofit organization based in Houston, Texas, that aims to provide fresh, clean water to homeless populations. IAW reminded Twitter users that the organization will need extra help getting water to the homeless in Harvey's wake, and is currently asking for donations.

It's difficult to assess people's needs if you don't live in the same region, so the best way to help is to get in contact with local shelters. They will be on the ground to assess the situation, and will be the best equipped to let you know what the homeless' needs are, or what resources they are lacking.

For the first time in its history, the National Weather Service has issued a storm surge watch, which indicates a "possibility of life threatening inundation, from rising water moving inland from the coastline" moving into the weekend. Conditions on the ground will be aggravated for the region's most vulnerable populations, including the homeless, and they will be contending with the consequences of the storm long after it passes. Consequently, it is important to not only reach out and help now, but also to check in well after the storm to see if you can provide deeper support.