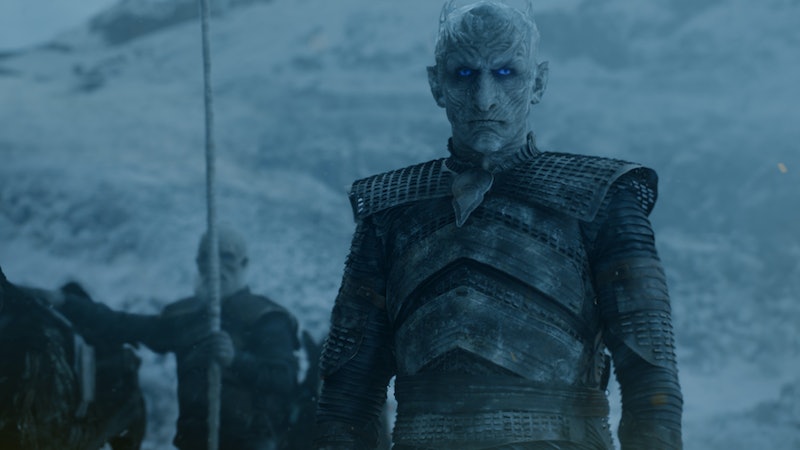 Before Jon Snow embarks on the biggest battle of his life, he'll need to know how to kill White Walkers. That's no easy task, considering that we're still learning about the Night King and his army and what the White Walkers actually want. Your guess is as good as any Redditors' at this point, but in Season 7 Episode 6 "Beyond The Wall," we learned a few new things that may come in handy when taking on the Night King.

First, let's talk about the difference between White Walkers and wights, because, yes, there is a difference. As Vulture explained, the White Walkers are "supernatural beings" that are usually seen riding dead animals, with "white hands" and who communicate mostly in screams. Wights are actually just humans that the White Walkers have killed and resurrected as their zombie henchman.

While both need to go, here, we're going to specifically talk about the White Walkers, who are the real baddies. Especially since we learned in "Beyond The Wall" that it wights can be eradicated if you kill the White Walker that created it. Easier said than done, of course, since those guys are quick and carry their own crystal daggers that could turn you into a wight.

What we've always been told is that dragonglass will kill the White Walkers, which is why Jon Snow wanted to get Daenerys Targaryen on his side. After all, her castle Dragonstone is sitting on a whole lot of the obsidian/volcanic glass. We've also been told that Valyrian steel, forged with dragon fire, will take down the White Walkers. Unfortunately, there are only a few of those swords left in existence and the knowledge of how to construct them was lost with the Valyrians... or has it?

The newly returned Gendry is a blacksmith who apprenticed for Tobho Mott, one of only a few people who knows how to rework Valyrian steel. This means that Gendry may hold the key to taking down the Night King if someone would just tell him about the whole Valyrian steel killing White Walkers thing. Like, now.

The question of whether dragon fire can kill White Walkers is still out there considering that the Night King walked right through it. Do they have to be hit directly to be killed by dragon fire? It seems like that would be good to know for the future.

"...ancient spells were carved into its foundation. Strong magic. To protect men from what lies beyond. And while it stands, the dead cannot pass. I cannot pass.”

Of course, there are always loopholes, since, back in Season 1, wights got past the door of Castle Black and the Hound was able to drag one in after being flown to the castle on Dany's dragon. Game Of Thrones The Podcast by Bald Move has a theory on how the White Walkers will get past the wall. "A wight cannot choose to cross the barrier themselves," the podcast explained. "But if someone is foolish enough to take it south, it's not like it's going to get vaporized by someone else bringing it."

What is clear is that what we know about the White Walkers right now is bound to change. Let's just hope Jon Snow will have all the up to date information he needs before taking on the Night King.