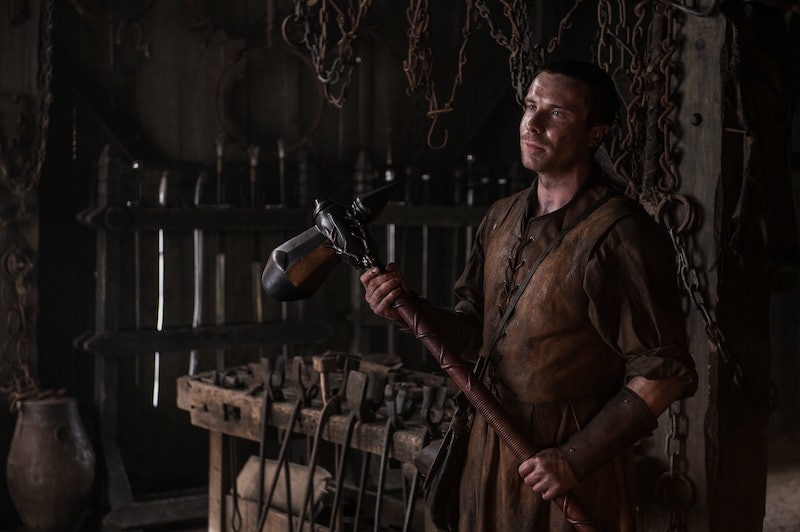 You probably weren't so surprised to see Gendry finally return to Game of Thrones. It had been rumored long before Season 7 that Gendry, who was last seen row, row, rowing his boat away from Melisandre in the third season finale, would make a comeback. Who knew that the bastard son of Robert Baratheon was actually right under our nose the whole time in King's Landing? But what may be even more surprising than learning this character was hiding in plain sight is that many believe Gendry returned because he's Azor Ahai.

Now, for years there have been many theories about who Azor Ahai really is, including that Jaime Lannister or even Daenerys Targaryen is the Prince That Was Promised, the one who will lead the Seven Kingdoms to victory in the war against the White Walkers. (As Missandei explained in Season 7 Episode 2 "Stormborn," "prince" in High Valyrian is actually gender neutral meaning it could also be the Princess That Was Promised.)

Sure, Gendry has been a non-factor most of the show and seems like an unlikely choice, but the fact that he is all of a sudden back can't be ignored. YouTube user youzz33 laid out a theory that looks to the past to explain why Gendry is the future of the Seven Kingdoms.

Gendry is a bastard, which means he's not pure Baratheon. He also has a bit of Targaryen blood in him; Aegon V Targaryen is his great, great grandfather. But this theory points out that the first Baratheon ruler of Westeros was also a bastard. George R.R. Martin often shows how history repeats itself, meaning we shouldn't be surprised to find out that Gendry is more than just a bastard, something we have already seen with Jon Snow.

But how does this connect to the idea that Gendry is Azor Ahai? Well, being that Cersei ordered all Robert Baratheon's bastard children killed and all were except Gendry it shows there is something special about this son. Perhaps, you would even say that he's been reborn or chosen, since he survives and is forced to leave King's Landing.

Another sign Gendry could be the chosen one is the myth of Azor Ahai and how he made his weapon, Lightbringer, a flaming sword used to defeat the White Walkers. Legend has it that Azor Ahai labored over the making of this sword, first shattering the blade in water and then plunging it into the heart of the lion only to see it shatter.

Third time was the charm when Azor Ahai stabbed his beloved wife Nissa Nissa in the heart and her scream caused the sword to burst into flame. Her soul then combined with the steel to make it powerful enough to take down the Night King's army.

It's said that the new Azor Ahai will relive all three of these points. Gendry's boat expedition could satisfy the water element and being that he's been making weapons for the Lannisters, whose sigil is a lion, that could check that box. As for who his Nissa Nissa is, Gendry always had a close relationship with Arya Stark.

But it may be much simpler than that. As Esquire pointed out, Gendry has the capability to make his own Lightbringer being that he was the apprentice to blacksmith Tobho Mott, who is one of only a few people who knows how to rework Valyrian steel. It's that steel forged by dragons, along with dragonglass, which could kill White Walkers. Perhaps a simple and rather obvious clue that shouldn't be overlooked when it comes to the prophecy of Azor Ahai. After all, Gendry is full of surprises.

More like this
Emilia Clarke Shares More Details About The New 'Game Of Thrones' Series
By Maxine Harrison
Twitter’s Reaction To HBO’s ‘Game Of Thrones’ Jon Snow Spinoff Idea Is Chaotic
By Stephanie Topacio Long
Did *That* Character Really Die In The 'Stranger Things' Season 4 Finale?
By Grace Wehniainen
'Stranger Things' Cast Thinks It's "OK Not To Label" Will Byers' Sexuality
By Alyssa Lapid
Get Even More From Bustle — Sign Up For The Newsletter