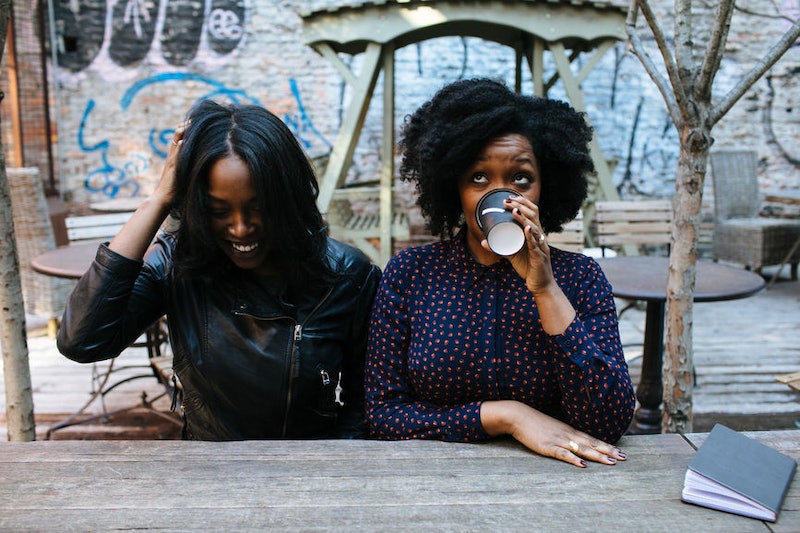 In school, you're taught that popularity is the be all and end all. The more friends you have, the more worthy you are. But when you leave that world behind, you soon realise that having more friends than you can handle is nothing but a mental drain. You may wonder how to let go of a friendship but have no idea how to do it without upsetting the other person. So you carry on as normal, wishing with each and every day that you could just bite the bullet and tell certain people how you really feel.

Over the past few years, I have ended more than one friendship. So many in fact that I now count only two people as good friends; people I can rely on and who can hopefully rely on me. I like to think of myself as Mamma Mia!'s Donna Sheridan with a Rosie and Tanya by my side rather than someone people would class as lonely.

A recent study carried out by researchers at Oxford University found that women in particular have extremely intense friendships. The conclusion? That women need five best friends in order to deal with the many problems life throws at them. In the '90s, a psychologist called Robin Dunbar proposed a theory stating that our brains can only cope with so many people. He reckoned the average person had a social group consisting of 150 people (pardon?) with only five individuals making up a person's close support group. I would argue that we can get along fine with a few less.

The two best friends I have really get me. Rather than finding it hard to relate to each other's highs and lows, we are all in similar positions and are just as happy talking about the good things as we are spending three hours moaning about work, relationships, and the state of the world.

I won't lie. It took me a while to come to terms with the fact that my friendship group was slowly dwindling through no one else's fault but my own. It wasn't like they had done anything wrong but the spark was no longer there.

I took longer and longer to reply to some people's messages, always prefacing them with a "Sorry, I've just been so busy." They (and I) knew that it takes 30 seconds to send a text and was a poor untrue excuse. But lying felt a million times easier than admitting that I just didn't have the energy or desire to keep the friendship going.

It's a total cop out, I know, but even experts aren't sure what the best method of rejection is for someone you used to call a friend. Is it dragging the situation out for as long as possible? Or sitting down with them and go through the whole break-up rigmarole?

I honestly think the answer depends on what kind of person you are and what kind of person they are. If you're both honest, upfront, and what one might call brutally direct, the face-to-face (or phone-to-phone) option might be less painful for all involved. Just one conversation and it's all over.

But if you're a person who struggles with confrontation and awkward scenarios, slowly drifting away from your so-called friend is clearly preferable. It does actually take more time and effort on both your parts but may stop the other party from feeling like they've done something wrong.

Whatever you do, take responsibility for your decision, says psychologist Irene Levine. Don't try and pass the buck onto your friend and blame them for the break-up — even if you have had a massive argument. Own it and be happy with it. That way, you won't cause unnecessary upset and will soon see the benefits of having a tight-knit friendship group. Less drama to deal with, for one, and more time to focus on yourself.

Too often we are told to stick to our friends like glue. That every friend we make is a friend for life. It's really not the case. People change, lives change, and it's perfectly fine to pull back from a friendship that just isn't doing it for you anymore. It doesn't make you a bad person. It doesn't make them a bad person. It simply means you're in control of your own happiness.

Don't get me wrong, letting go of a friendship isn't the nicest thing you'll ever have to do. Thanks to the 24/7 presence of social media, you may still receive messages from people two years later asking how you are. And yes, it is awful to have to ignore them. But remember why you made the decision in the first place and stick to your guns.

There's nothing worse than stringing someone along and making them feel like you're there for them when inside you wish you couldn't be further away. In a really weird way, rejection can be a form of kindness. At first, it definitely doesn't feel like that. But, as with everything, time is always a healer.