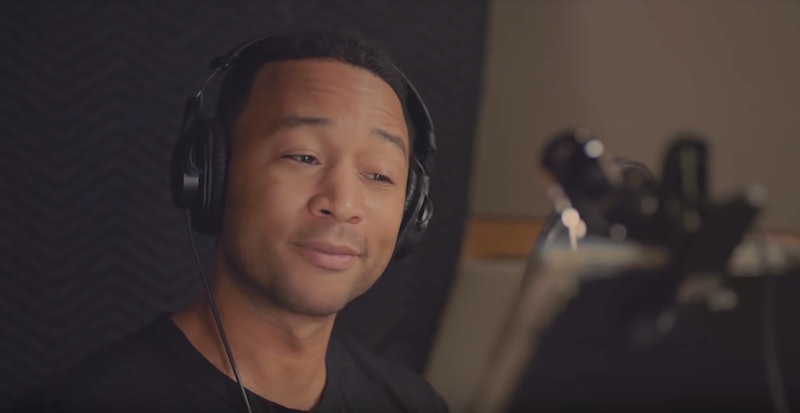 Have you ever wanted to wake up to John Legend’s soothing voice, even for just one morning? Of course you have. You’ve likely dreamed about him guiding you through the rest of your day, too. Now, thanks to Google Assistant, your dreams can become a reality. The singer is the first celebrity voice on Google Assistant, and you can make John Legend the voice of your Google Home, so you can ask him questions, hear him tell jokes, and of course, listen to his silky smooth ballads on command. And it looks like his wife Chrissy Teigen is taking the credit — kind of.

Teigen posted a new clip on Instagram advertising her husband’s voice on Google Assistant, captioning the post, “I gift to you all - the voice of my husband, on loan.” In the commercial, she wakes up in the middle of the night and asks Google to sing her a song. Legend’s voice comes through the speaker with a unique tune as Teigen relaxes once again, saying, “Just like the real John, except I get the whole bed.” That’s one of the perks of being single, am I right?

Starting Wednesday, April 3, users can activate the singer’s voice by simply saying, “Hey Google, talk like a Legend,” though the Google Home speaker, Android phone, or any Google Assistant-powered device. If you’re an Apple devotee, you can still get the Google Assistant app, so you don't have to miss out on one of Legend’s serenades.

While being the Google Assistant’s first celebrity voice may be exciting for Legend, he explained to People that he likely wouldn’t take advantage of it at home. “It might be a little weird to use it in my own voice,” Legend said. “We already use the Google Assistant all the time, and we’ll probably stick with the static voice. Using mine might be a little freaky at home.” Perhaps Teigen would disagree, though if we heard our own parents or spouse coming through the speakers, we’d be very annoyed.

Legend also talked about the work it took to become Google Assistant. “We went to the studio, I think, 10 days in a row where I was saying all types of phrases and sentences and words with different inflections and all kinds of things,” he told People. “Google has some kind of amazing algorithm, but it takes a lot of recording to do that. I thought it’d be cool to be one of the voices so here we are.”

However, nothing in this world is perfect. Legend’s voice is only available for select content, as noted by TechCrunch, meaning that he likely won’t be able to tell you more specific information, like Oprah’s birthday or who Beyoncé is (if you even dare to ask that question). He did, however, record answers to prompts like “Are you John Legend?”, “What’s your favorite type of music?”, “Who is Chrissy Teigen?”, and “Tell me a joke.”

The answers might be limited, but a world without Legend's voice waking us is one we don't want to live in, so we'll take what we can get.

More like this
Everything To Know About Taylor Swift’s 10th Studio Album, 'Midnights'
By Grace Wehniainen and Jake Viswanath
Everything You Need To Know About ‘Black Panther: Wakanda Forever’
By Bustle Editors
Beyoncé’s Special Tribute To Sister Solange Was Both Touching & Hilarious
By Stephanie Topacio Long
How Ghosts Inspired Kesha’s New Music
By Jake Viswanath
Get Even More From Bustle — Sign Up For The Newsletter