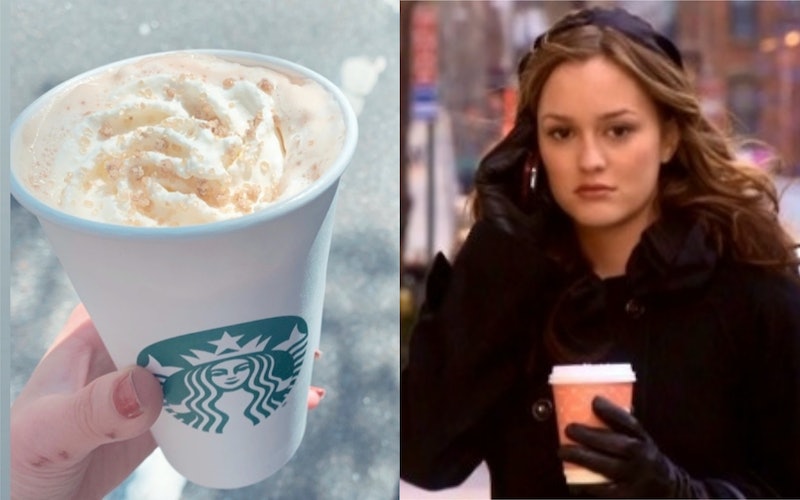 Good morning, Starbucks lovers. Gossip Girl here, and do I have some (coffee) beans to spill. Spotted at a local Starbucks near you: a latte at so delicious it may be worthy of Queen B herself. Tell your usual Starbucks order to scoot down on the Met steps, because once you learn how to order the Gossip Girl latte at Starbucks, your usual fare will be yesterday's news.

Like all juicy scoops from the Upper East Side and beyond, the Gossip Girl latte was born in secret — that is, because it isn't on the official menu, so only the savviest coffee drinkers are in the know. Coming in hot from the secret menu is a latte so delicious that it might get Rufus Humphrey to abandon his infamous obsession with waffles. And as you're well aware, there's nothing GG loves more than spilling piping hot secrets.

To create this sophisticated blend, start with a base of a Grande Cinnamon Dolce latte in the Starbucks app. Then, swap out two pumps of the Cinnamon Dolce Syrup for two pumps of Vanilla Syrup. Replace the sprinkles Cinnamon Dolce Sprinkles with Cinnamon Powder — in the words of Blair Waldorf herself, “You can’t wear such a beautiful shoe if there’s even a hint of a sprinkle outside.” Then, for a decadent twist, add Smoked Sea Salt Topping — because there's nobody saltier than a member of the Upper East Side elite who's been wronged.

Essentially: Four pumps. Two toppings. Say it and it's yours.

Alternatively, you can tell a Starbucks barista — or send one of your underclassmen minions to tell a Starbucks barista — the swap-outs you want for your drink in order to recreate it. Bearing in mind, of course, that the Gossip Girl latte is not an official menu item that you can ask for by name, like some kind of common coffee consumer — so make certain to ask your barista for the swaps extra politely, lest your behavior end up in a Gossip Girl blast.

The end result, you will find, is well worth it — as salty as Georgina Sparks, as rich as Chuck Bass, and as memorable as Blair Waldorf's rotating cast of headbands, and, of course, as Instagrammable as Serena van der Woodsen's shenanigans. She is beauty, she is grace — she is the Gossip Girl Latte.

Still thirsty for another Starbucks scoop? There are plenty more secrets where that came from. The "Cinderella Latte" was spotted making the rounds last month, as was the "Great Pumpkin Latte" a few weeks ago, two creations that riff off of the Pumpkin Spice Latte with White Chocolate Mocha sauce and Toffee Nut syrup, respectively. But if you're in a less-than-autumnal mood, the Gossip Girl Latte will best suit your coffee needs. Timeless, sophisticated, and just the right amount of salt — just like Gossip Girl herself.

And who am I? That's one secret (menu item) I'll never tell. You know you drank me. XOXO, Gossip Girl Latte.