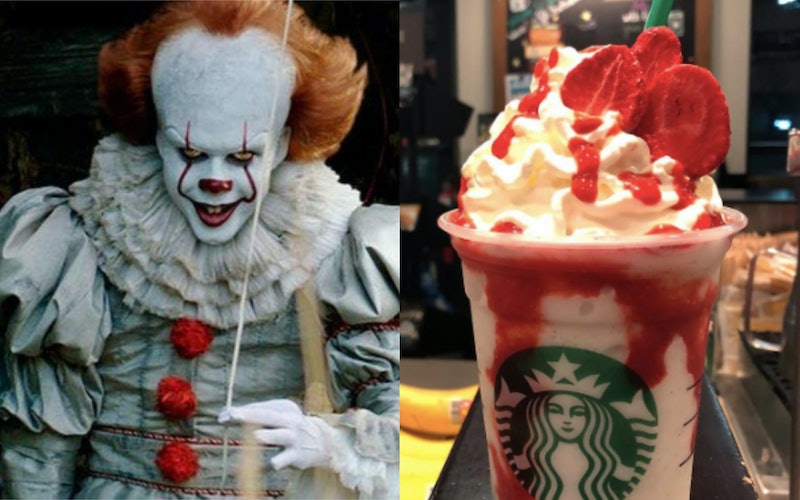 Another day, another Starbucks “secret menu” item — but this time, the item in question is deliciously spooky. Want to know how to order an IT Frappuccino at Starbucks in honor of Pennywise the Dancing Clown, the recent release of IT Chapter 2, and the looming Halloween season? Good news: It’s actually super easy to get. You can’t just order it by name, of course, but if you make the right customizations to a certain Frappuccino order, you, too, can float with the best of them.

As Best Products points out, this isn’t the IT Frappuccino’s first rodeo; it originally emerged in 2017, when the first chapter of the two-movie series was released in cinemas. It’s not clear exactly who invented the Frappuccino or at which store it originated, but the earliest Instagram posts from 2017 featuring the hashtag #ITFrappuccino center around stores in California: One, for example, comes from the Starbucks store located at Imperial and La Mirada in La Mirada (which, by the way, seems to be closed at the moment), while another is noted as having come from a Starbucks in Strawberry Creek, near Sacramento. (Given that La Mirada is in southern California and Sacramento is way up north, it seems that the Frapp had a pretty wide reach at the time.)

Now that IT Chapter 2 is out, it’s perhaps unsurprising that the drink would make a return to the social media scene; however — and I know I say this every time we talk about a new “secret menu” item, but it bears repeating — if you want to order an IT Frappuccino, don’t just roll up to the counter and ask for it by name. Since it’s not an official menu item, baristas aren’t trained in how to make it; heck, unless a given “secret menu” item has gone super viral, it’s likely they won’t even have any idea what you’re talking about (and even if the concoction in question has gained a certain amount of notoriety, there’s still no guarantee they’ll know what goes into it). To be clear, this isn’t a failing on the part of the barista; it’s just, y’know, the way things are. It’s their job to know how to make the standardized items that are on their employer’s actual menu. It’s not their job to know how to make items that some random person on the other side of the country just dreamed up and gave a catchy name — so it’s not realistic for customers to expect them to do so.

What you can do, though, is take advantage of the fact that the Starbucks menu is nearly infinitely customizable — meaning that, if you make the right adjustments to your order, you can make pretty much any secret menu item you want (as long as all the ingredients are in stock). It’s on you to make sure your order is clear, but as long as you place it correctly, getting yourself a secret menu item isn’t at all difficult. So, if you want to order an IT Frapp, here’s what to tell your barista to make:

(Note, though, that you may not be able to order an IT Frappuccino via the Starbucks mobile app. Strawberry puree isn’t one of the options in any of the customization menus within the app — not even the Toppings menu. There isn’t even a way to include any additional notes about your order within the app, so you can’t just type in “Please top off with strawberry puree” anywhere, either. Just, y’know, FYI.)

Interestingly, a bit of a kerfuffle actually occurred the last time the IT Frapp made the rounds in 2017. At the time, the recipe involved asking for a vanilla bean scone to be blended up with the Frappuccino (you’d put this additional instruction between steps 2 and 3 in the ordering instructions above) — but it turns out that it’s against company policy to add baked goods to blended drinks.

An irate Reddit post from a Starbucks partner about the IT Frappuccino drove that point home in 2017; additionally, sources dated long before the IT Frappuccino’s arrival confirm the policy. For example, Thrillist spoke to two Starbucks partners in 2015 — one from California and another from Washington — who both told the outlet about it: “What we can’t allow are foreign substances from a customer’s home, products not used by Starbucks, and all food — with the exception of bananas, blueberries, and Evolution Fresh ingredients,” said one partner; noted the other, “It may come across as silly to some, but it can definitely be a big deal for those with allergies. On top of that, food items can do damage to the blades in the blender.”

Some stores are occasionally willing to break the policy, though — which explains why some of photos making the rounds on social media featuring chalkboard signs touting the drink outside a handful of Starbucks stores mention the vanilla bean scone as an ingredient. Just know that if you ask your local Starbucks to blend the scone into your Frapp, they may decline to do so — in which case, just roll with it. Don’t give them a hard time about it. They’re just following company policy.

But if you want to order the current incarnation of the IT Frapp, it’s simple: Name your size, then ask for a Vanilla Bean Crème Frappuccino topped with strawberry puree. Voila! Now enjoy your treat. Just don’t look into the deadlights, OK?