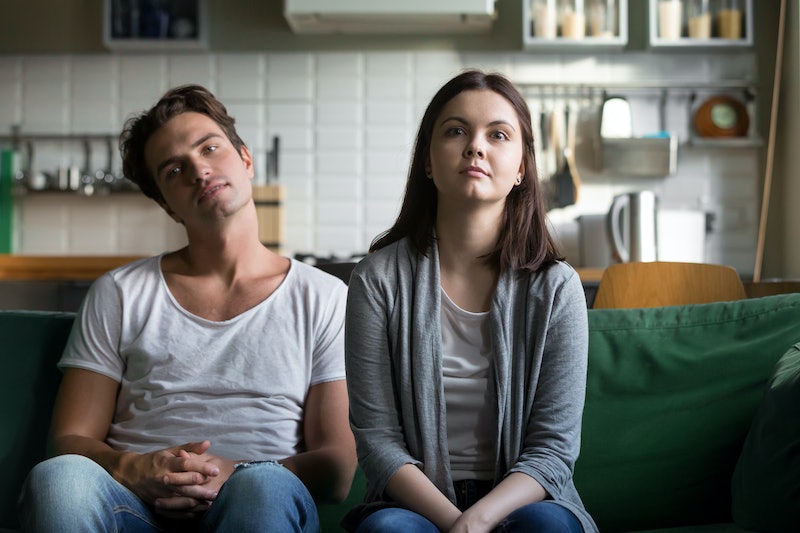 States across the country are preparing to reopen gradually, people are beginning to think about heading back to work, and couples everywhere are starting to panic about what will happen to their relationships once quarantine ends. Whether you’ve found that your bond has grown stronger together or you can’t wait to not see your boo’s face 24/7, the time to start consciously un-quarantining with your significant other is now.

Lauren, 34, a journalist in San Francisco, knows intimately what it’s like to go from all your time together to less — and back again. She and her husband have been together for 10 years, the first couple of which were long distance. They also sailed across the Atlantic Ocean together, a trip that took four months and during which they only saw each other and the one other couple that was traveling with them.

Lauren tells Bustle that when she and her then-boyfriend were long distance, they would spend every second of in-person visits together. So, when he moved to San Francisco to be with her full-time, it took a while to feel OK making plans without him. Part of her felt like not wanting to spend all her time with him was a bad sign. But she soon realized that wasn’t the case.

Yesterday was the first day I really started thinking about what the future could look like.

“It doesn’t mean that you don’t still love each other; don’t still want to be together,” Lauren says. “It just means that you now have an opportunity to space that time out a bit more.”

For people who are feeling a little bummed about not spending so much time together once we’re allowed outside again, clinical psychologist Joshua Klapow, Ph.D., recommends communicating that need by “turning it into a communication of love.”

“Tell them that you miss them, and you realize how much you need to be with them,” Dr. Klapow says. “Make it a discussion about your love for them versus a complaint or a demand. Send notes of love, texts of affection, and remind them that the time you spent in quarantine together, albeit stressful, was a time that had parts that you loved and want to revisit.”

For couples who find that they’ve enjoyed all this new time together, Dr. Klapow says this is the time — before we get out of quarantine — to really dig into the “why” of it.

“Talk about what you have enjoyed, how your relationship has improved, and what you want to hold on to,” Dr. Klapow says. “Be open and honest. You have a deep opportunity to really improve the relationship for the long haul if you discuss it with your partner.”

Of course, not every couple is dreading the end of quarantine. For some, being together all the time has taken a major toll. For those couples, Dr. Klapow suggests taking the time to debrief, so the stress doesn’t implode your relationship.

“Don’t miss the opportunity to talk about the challenges and strains and come up with solutions for them,” Dr. Klapow says. “The biggest mistake you can make is to blame all the strains on the quarantine itself. The quarantine may be stressful, but it’s not the cause of the relationship challenges. It’s likely making existing problems worse.”

While most of partnered people have had to adjust to 24/7 with their significant other, Alex, 33, has no idea when she'll be seeing her primary partner — who is in an open marriage — again. Alex lives in Brooklyn, and her boyfriend lives with his wife, about an hour's drive away. Before the start of COVID-19, he was able to come down to the city and spend one weekend per month with her, which provided a certain amount of stability and consistency to their relationship. Alex found she could handle the distance, as long as she knew when they'd be able to see each other again.

"That allowed me to feel like I had access and control," Alex tells Bustle. "I felt like we had a good equilibrium, and I was feeling a lot better because it was a little turbulent to have a primary partner for whom I'm not their primary partner."

While their quarantine relationship isn't too far off from their normal relationship — lots of texting and chatting throughout the week — Alex has found that the uncertainty of not knowing when she'll see her boyfriend again has made even talking to him harder. She hasn't seen him since February 27, she finds video chatting emotionally difficult, and as of mid-May, she has no idea when she'll be able to see him in person again.

Are we going to go back to the same way? How much control will I have over the timeline?

“Yesterday was the first day I really started thinking about what the future could look like," Alex says. “Are we going to go back to the same way? How much control will I have over the timeline?”

While Alex feels ready to see her boyfriend again and resume their regular visits, she doesn't think her boyfriend and his wife are ready for that to happen. To complicate matters, Alex is fairly sure she contracted the virus in March. That same month, she saw her upstairs neighbor's body dragged down the stairs by the police, after he died from COVID-19 alone in his apartment.

“All we’ve talked about explicitly is that neither of us can know when that time [that we can see each other] will be and what it will look like, but we’re committed to figuring it out,” Alex says. "I don't know... I just don't know."

The unknown of all of this is something everyone can relate to, whether or not you're quarantining with your partner. And the unknown can be scary — really scary — especially when you rely on your partner for emotional stability. Dr. Klapow recommends taking this time to work through those scary feelings and issues, no matter whether you can't wait for quarantine to end or you secretly wish it would go on forever.

“This is a chance to point out not so much the problems, but how you all can live together better by addressing what works and doesn't work for you,” Dr. Klapow says. “This is about communication, honesty, and compassion.”