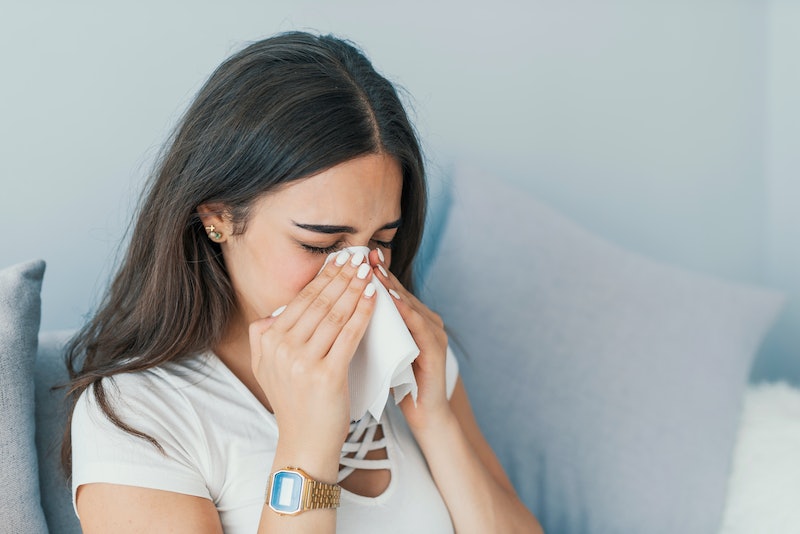 Have you ever used so many tissues to blow a stuffy nose that you've wound up with burning, tender nostrils? Most of us have, and most of us can attest to it: It sucks. Especially when the skin around your nostrils gets so dry, it actually starts to peel! If you feel a cold coming on and find yourself starting to reach for tissues, make sure you learn how to protect your nose from tissue burn. Luckily, it's surprisingly easy to avoid with a little planning!

Similar to chapped lips, chapped noses are common in winter when everyone's catching colds and the air is drier (leading to drier, dehydrayed skin), According to the medical experts over at Zocdoc Answers, chapped noses are typically caused by excessive nose blowing, as the irritation and tissues strip the nose of its natural moisture. Combine the runny rose and tissue issue with dry, heated indoor air and dramatically cold outdoor temperatures and you've got a recipe for a chapped nose disaster.

For what's it worth, you're totally not alone in your chapped nose struggle. During my New York winter, I caught the meanest cold, and since I felt too under the weather to go buy any tissues, I used cheap toilet paper to blow my nose all night long. Needless to say, that was a poor choice. Even though the cold healed fast, my chapped nose lingered for nearly two weeks.

Learn from my mistakes and follow the tips below so you can easily avoid a chapped nose!

1. Rub Vaseline On Your Nose

While vaseline is a great treatment option for a chapped nose, ZocDoc Answers recommends reaching for it before your nostrils show signs of chapping since it will act as a protective layer between your skin and the tissue.

To minimize the damage to the skin on your nostrils, minimize the amount of materials that could irritate it quickly. Instead of bargain store toilet paper (again... learn from my mistake), reach for lotion-infused tissues when blowing your nose to help keep your skin hydrated and soft.

Instead of just blowing as hard as possible, WebMD experts suggested trying to blow softly through your nose, one nostril at a time to reduce the strain on your delicate nostril skin.

If your chapped nose feels like it's raw and on fire, reach for aloe vera gel to soothe irritated skin. It might feel weird putting it on your skin (and reapplying after every nose blow), but it'll help the area get more hydrated and heal quicker.

If you don't already own a humidifier, it's worth investing in one. It'll effectively moisturize the air in your home and office when running, and it can really make a difference in how quickly your chapped nose heals. After all, chapped skin is dehydrated skin, so you'll want to do everything you can to rehydrate that skin.

Getting sick sucks — and having a chapped nose can make it even worse. Avoid unnecessary discomfort and make sure the area around your nostrils stays hydrated and moisturized no matter how many times you blow your nose — you'll thank yourself later!

This article was originally published on Dec. 7, 2015