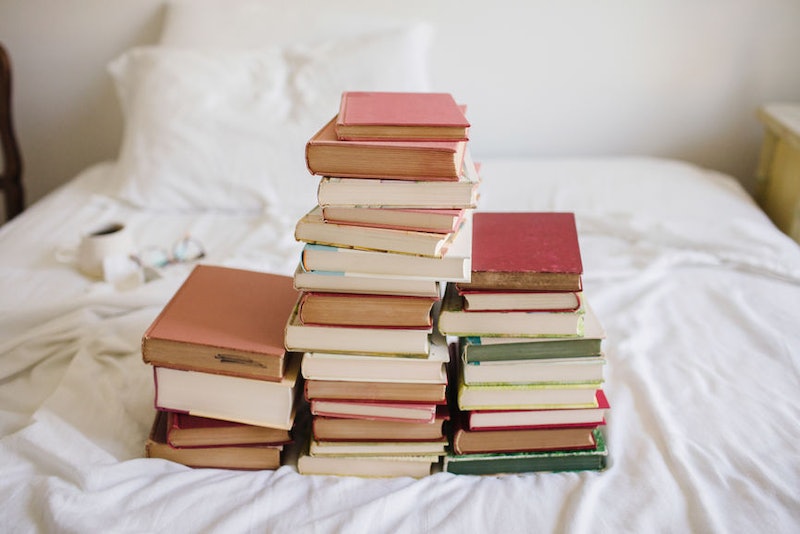 Most readers know all too well the mixed feelings that come with a stack of exciting new books. On the one hand, nothing is more thrilling than seeing your seasonal TBR of unread books, and relishing in the prospect of hours of reading ahead. But on the other hand, it can often feel like there's not enough time to actually read all of the amazing books that are being released every single week. At times like this — times when I really want to read but feel daunted by the very prospect of figuring out which book to begin with — I often turn to BookTube, a a literary subset YouTube. That's where I discovered this three-step trick for getting through my TBR pile and reading more books.

The "Try a Chapter Tag" (created by Malia Cabiles at BookParadise back in 2015) is just three steps, but it changed everything for me. First, you choose at least five books from your shelf that you've been meaning to read; second, you read the first chapter of each book; last, you decide if you'll read it now, put it aside, or unhaul it.

It sounds deceptively simple, but it's actually an ingenious way to reevaluate your bookish priorities, especially during a busy reading season. The tag is totally customizable, so you can pick out just the five books you're most eager to read, or if you're feeling particularly ambitious, you can set aside an hour or two to go through the entirety of your current to-be-read pile.

I chose the former when trying out the tag for myself recently, and plucked Daisy Jones & the Six by Taylor Jenkins Reid, Tell Me How You Really Feel by Aminah Mae Safi, Long Live the Tribe of Fatherless Girls by T Kira Madden, Circe by Madeline Miller, and the upcoming Gods of Jade and Shadow by Silvia Moreno-Garcia from my stack.

As I dove into the books, I was pleased to find that my interest in all of them only grew. Even though I was going into each read with a wealth of background knowledge, test-driving a chapter brought me back to the days when I would wander through the bookstore and build a stack of books at random, carrying them to a corner where I sat for ages, dipping into each one to decide which to bring home with me. It's rare that I take each book I want to read into such lengthy consideration now, but the process reminded me what's so exciting about picking a new read in the first place.

And by prioritizing the books I most wanted to get to — I sped through Daisy Jones and Gods of Jade and Shadow in quick succession, and perhaps because they were simply what I was most excited to read at the time, I ended up loving them both — and putting aside the rest for another time, I was able to loosen the cobwebs caused by indecision, and get my summer reading back on track. Whether you're like me and are looking to jumpstart your reading season, or you need a foolproof way to pick out your next book club read or decide which book to bring with you on your next weekend getaway, trying a chapter just might change the way you read forever.