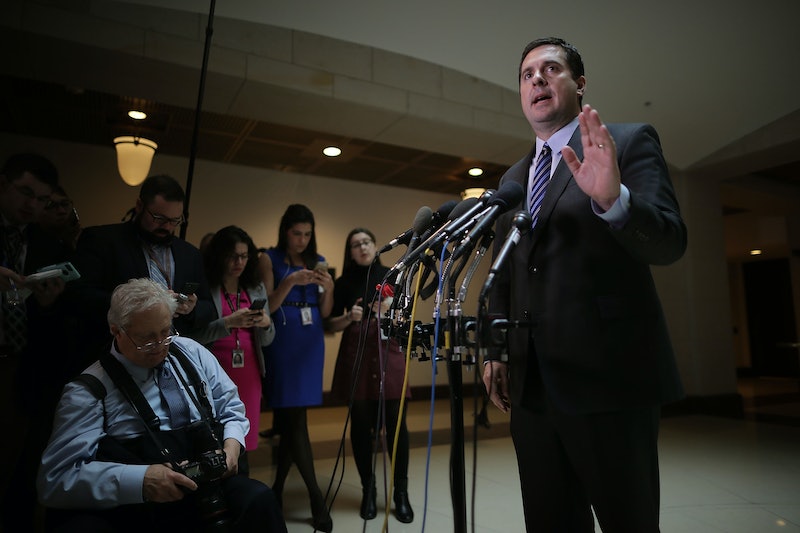 Despite opposition from top national security officials, the Trump administration publicly released the already-infamous Nunes memo on Friday. The four-page congressional memo, written by House Intelligence Committee Chairman Devin Nunes and his Republican aides, alleges that the FBI relied on biased information to obtain a surveillance warrant during the Russia probe. Donald Trump supported the memo's release, suggesting that it proved that the origins of special counsel Robert Mueller's investigation were rooted in political bias. Not everyone in the White House agrees it will have that impact, but you can decide by reading the Nunes memo for yourself here.

The memo was declassified by the House Intelligence Committee on Friday after Trump authorized its release, without calling for any part of the document to be redacted. Two names in particular are highlighted in the memo: those of former Trump campaign adviser Carter Page and former British intelligence agent Christopher Steele.

The memo alleges that the FBI requested a surveillance warrant against Page largely on the basis of a dossier compiled by Steele and sponsored by both the Democratic National Committee and Hillary Clinton's presidential campaign. According to the memo, the FBI and the Department of Justice did not disclose in their original FISA application or in three subsequent renewal applications that the DNC and Clinton's campaign funded Steele's compilation of the dossier, which BuzzFeed published in full last year.

The dossier alleged that Russia had been supporting Trump for years, while at the same time collecting compromising information about him. It also alleged that Page had met with senior Russian officials as a representative of Trump's presidential campaign.

The memo then goes on to focus more specifically on Steele. The document alleges that Steele had anti-Trump biases of which DOJ officials were aware, but that these biases were not disclosed in the FISA application.

In making these allegations, the memo describes an encounter between Steele and then-Associate Deputy Attorney General Bruce Ohr. The memo alleges that in September 2016, Steele confessed to Ohr that he "was desperate that Donald Trump not get elected and was passionate about him not being president." This is the only section of the document that appears in bold text. According to the memo, the FBI had documented this exchange between Steele and Ohr, but did not present this information in any FISA applications.

Moreover, the memo alleges that the FBI's FISA application against Page pulled information from a Yahoo News article published in September 2016. The article describes Page's July 2016 trip to Moscow, after which the FBI was concerned that Page had been compromised. But the memo took issue with the fact that the FBI did not acknowledge that Steele had admitted to leaking information to Yahoo News that was then used in the article.

According to the memo, the FBI terminated Steele as a source in October 2016 for media disclosures to Mother Jones — "what the FBI defines as the most serious of violations." However, the memo argues that Steele should have been terminated earlier for his media disclosures to Yahoo News and other outlets before the Page application was submitted in October. The memo accuses Steele of lying to the FBI about having these prior media contacts, therefore enabling the FISA application to go through.

The final part of the memo, however, appears to confirm The New York Times' report that the Russia probe first started when junior Trump campaign adviser George Papadopoulos drunkenly told an Australian diplomat in London that Russia had compromising information about Clinton. As NPR reported following the memo's release, this was a known story — indeed, it has not been a secret where the FBI's Russia probe really started — but the memo confirmed for the first time that it was Papadopoulos's actions, rather than Steele's dossier or any other incident that triggered the FBI's investigation into Russian interference. Papadopoulous later pleaded guilty to lying to the FBI.

It seems, then, that the memo writers' primary issue with the Russia probe is how the FBI went about seeking a surveillance warrant against Page. Hours before the memo was declassified, Trump claimed on Twitter that the memo proved that "the top Leadership and Investigators of the FBI and the Justice Department have politicized the sacred investigative process in favor of Democrats and against Republicans."

Trump and his supporters believed the memo would cast doubt on Mueller's investigation, exposing that it was rooted in political bias. However, although the memo alleges that the FBI would not have been able to get a surveillance warrant against Page without pulling information from the unverified Steele dossier, it does not seem to have quite the earth-shattering content that Trump was expecting — just as White House officials seemed to fear.