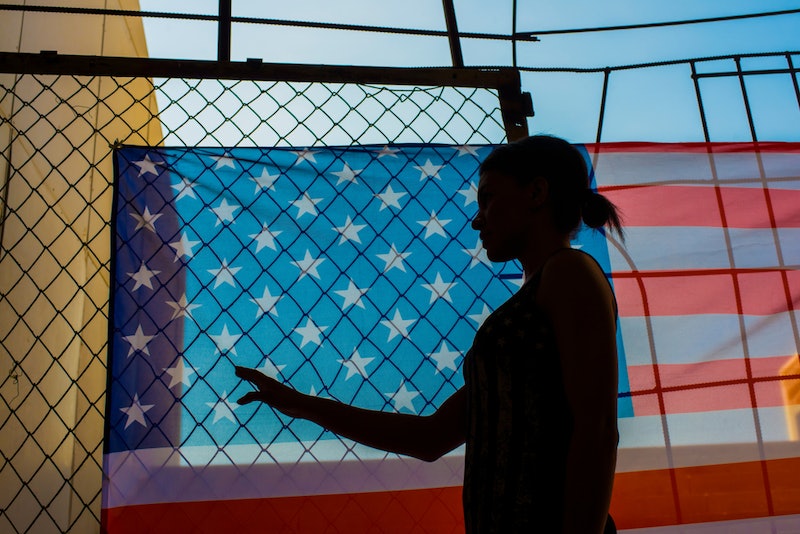 As you may have heard, Donald Trump Jr. recently retweeted a post calling California Senator Kamala Harris' "American blackness" into question following the second Democratic debate. And you're correct to think the remarks sound oddly familiar. They're reminiscent of the "birther" conspiracies former President Barack Obama faced during the 2008 race, and as you may remember from past elections, sometimes the relatives you least expect can start believing them. Knowing how to respond to birther myths being perpetuated by people around you — say, at the family dinner table — will be especially important as the 2020 election cycle heats up.

The tweet in question said in part, "Kamala Harris is *not* an American Black. She is half Indian and half Jamaican. I'm so sick of people robbing American Blacks (like myself) of our history."

Other, similar tweets spreading misinformation about Harris came from accounts associated with The American Descendants of Slavery movement, which advocates for reparations and affirmative action for Black descendants of enslaved people, but doesn't believe other Black folks should benefit from those same policies.

Trump Jr., who The New York Times reported has since deleted his retweet, added, "is this true? Wow."

This misinformation is particularly unsettling because this isn't the first time people have questioned Harris' "eligibility." As The Daily Beast reports, in January, far-right conspiracy theorist Jacob Wohl began circulating entirely false rumors that Harris was ineligible to run. These attacks, as well as the latest tweets about Harris' race fall into an eerily similar category as the "birther" myths about Obama.

Daniella Gibbs Leger, the executive vice president for communications and strategy at the Center for American Progress Action Fund, explains what "birtherism" actually means in an email to Bustle.

"Birtherism is the false claim spread by the some on the right — including Donald Trump — that Barack Obama wasn’t born in this country," Leger writes in an email. "In this country, racists and white supremacists have a long history of 'othering' African Americans, from slavery to denying them equal rights as Americans." Leger points out that the tweets about Harris are "just another form of birtherism" that question her "American-ness" and her race. Ultimately, the intent is to discredit her candidacy.

"Harris is a Black American with an Indian mother and a Jamaican father. Contrary to what some may think, the Black community isn’t a monolith," Leger writes. "Her life experience is going to be different than others, but it doesn’t make her any less Black. It’s important to remind people of this."

Relationship and sex therapist Becca Hirsch, M.A., LMFT, from The Center for Mindful Living, a therapy center in Chicago, approaches the situation from another perspective. During heated arguments in general, she suggests using active listening skills, even if you 100% disagree with the other person's opinion. Approaching the conversation from how the issue at hand makes you feel is a way to minimize the chance your family member will take your comments as a personal attack. Instead, they might learn about why the birtherism myth is so harmful.

"​I give couples who have difficulty communicating the same advice: talk about how a particular issue makes you feel. For example, 'I feel really scared because ... '" Hirsch writes in an email. "When we talk using 'I statements' such as these, it shows that you are taking ownership of your feelings (which are always valid), which will therefore create a less defensive and volatile space."

Lastly, Hirsch suggests discussing the direct impact these issues or comments have on you, your community, or people close to you. Focusing on someone you know personally, as opposed to more broadly attacking particular ideas or politicians, can help to personalize and illustrate the real impact of people's choices and words.

"At the end of the day, we must remember that we cannot force people to engage in a respectful and open dialogue," Hirsch writes. "We can model how to communicate respectfully and effectively, and set boundaries when it is not being reciprocated."

These kinds of discussions are by no means easy to navigate, and there's always the chance they could come up when you least expect them, especially as the 2020 election creeps closer. But while sharing your perspective doesn't have to turn into an all-out argument, it is important to stand up for what you believe in.