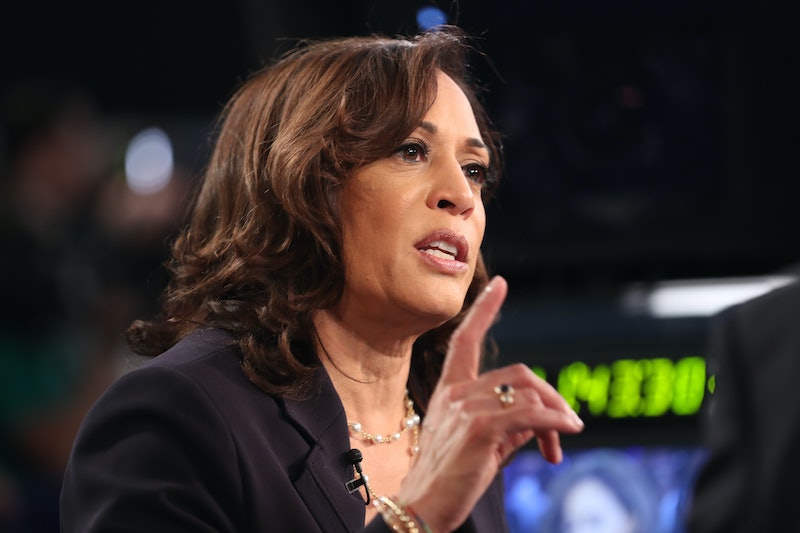 After confronting former Vice President Joe Biden over both his comments on segregationists and his opposition to busing during the second Democratic debate, California Senator Kamala Harris was attacked by multiple Twitter accounts — including far-right trolls, Donald Trump Jr., and what some suspect are bots — that claimed that she wasn’t really “an American Black.”

According to Harris’ attackers, she isn’t a “native” or a true “American Black” because her father is Black Jamaican and her mother is Tamil Indian. One viral tweet read, in part, "I’m so sick of people robbing American Blacks (like myself) of our history." Many of these attacks were coming from accounts affiliated with the #ADOS (American Descendants of Slavery) movement, which advocates for reparations for "Black Americans," meaning Black descendants of enslaved people, while arguing against Black immigrants and Black U.S. citizens descended from Black immigrants' inclusion in affirmative action, reparations, or other, similar policies.

But these views about what Blackness is aren't just offensive — they're categorically untrue. Kamala Harris’ experience of Blackness may not fit into the box of peoples’ expectations, but that doesn’t make her Blackness invalid. Being Black isn’t a homogenous experience, and it can’t be stripped from someone because their family might not be American.

When I decided to go to Howard University — a Historically Black College and University (HBCU) — many people in my life, Black and non-Black, asked me why I wanted to “segregate” myself. They questioned whether I would miss the “diversity” that a predominantly white institution (PWI) could give me. I remember being struck by how easily people could dismiss my Blackness as being limiting, confining, and monolithic.

However, we also can’t ignore the fact that due to physical appearance, some Black people have different experiences of Blackness. Harris benefits from light-skinned privilege, class privilege, even hair bias, but none of that can strip her of her Blackness. It just helps us understand what her specific experience of it might be.

There are a multitude of criticisms one could make about Kamala Harris’ prosecutorial record: the truancy law that led to the arrests of some Black parents, her fight to keep more inmates in prison, her appeal to keep a death penalty system that had been ruled unconstitutional, among others. But none of these things have any bearing on whether Kamala Harris is an American, or whether she’s “Black enough.”

I suspect that people prefer to lean on unfair denials of a person’s ethnic identity because maybe it feels easier than acknowledging the sad truth: that oppressed people can still oppress others, even those in their own communities. Consider Ben Carson, Supreme Court Justice Clarence Thomas, Candace Owens, Jay-Z, and even Barack Obama. Some might say each has done harm to the Black community on various levels, but they’re still part of our community. And that’s a hard pill to swallow; the knowledge that, as Black people, we can hurt each other by contributing to systemic racism. However, as a Black community, we’ll never address this dynamic if we choose to fall back on xenophobic rumors to explain away the ways our leaders disappoint us.

Together, we negotiate the tensions that arise because of the differences in how we each experience Blackness. But we are all Black.

The attacks on Harris also illustrate how dangerous it is to normalize xenophobia towards Black folks in diaspora. Black immigrants are more likely to be stopped, arrested, and incarcerated, just like all Black people in the United States. And because of this exposure to the criminal justice system, they might be a higher risk for deportation.

“Although only 7 percent of non-citizens in the U.S. are Black, they make up 20 percent of those facing deportation on criminal grounds,” Jeremy Raff wrote in the Atlantic. And with oppressive immigration laws becoming more common and children being separated from their families while detained in horrifying conditions, it’s vitally important not to normalize anti-immigrant sentiment, especially within our own communities.

The racist attacks against Kamala Harris should serve as a crucial teaching moment about the dangers of treating Blackness like a monolith. Because what defines us as Black people isn’t our skin tone, it isn’t the content of our DNA, nor is it our nationality or our parents’ nationality. What defines us as a people is our shared experiences across an impossibly wide diaspora. Those shared experiences link us together, in both our past and our present, and in the more equitable, just future that we should hope to create. And engaging in xenophobia makes that realizing that future so much harder.

More like this
8 Charities To Donate To During Black History Month
By Alexis Morillo
Ashamed Of Your Screen Time Stats? Here's How To Change That
By Alexis Morillo
Learning To Love, Not Judge, The Lunchbox Wives Of TikTok
By Esther Zuckerman
How To Turn Off TikTok Profile Views So You Can Stalk Other Accounts In Secret
By Alexis Morillo
Get Even More From Bustle — Sign Up For The Newsletter
From hair trends to relationship advice, our daily newsletter has everything you need to sound like a person who’s on TikTok, even if you aren’t.